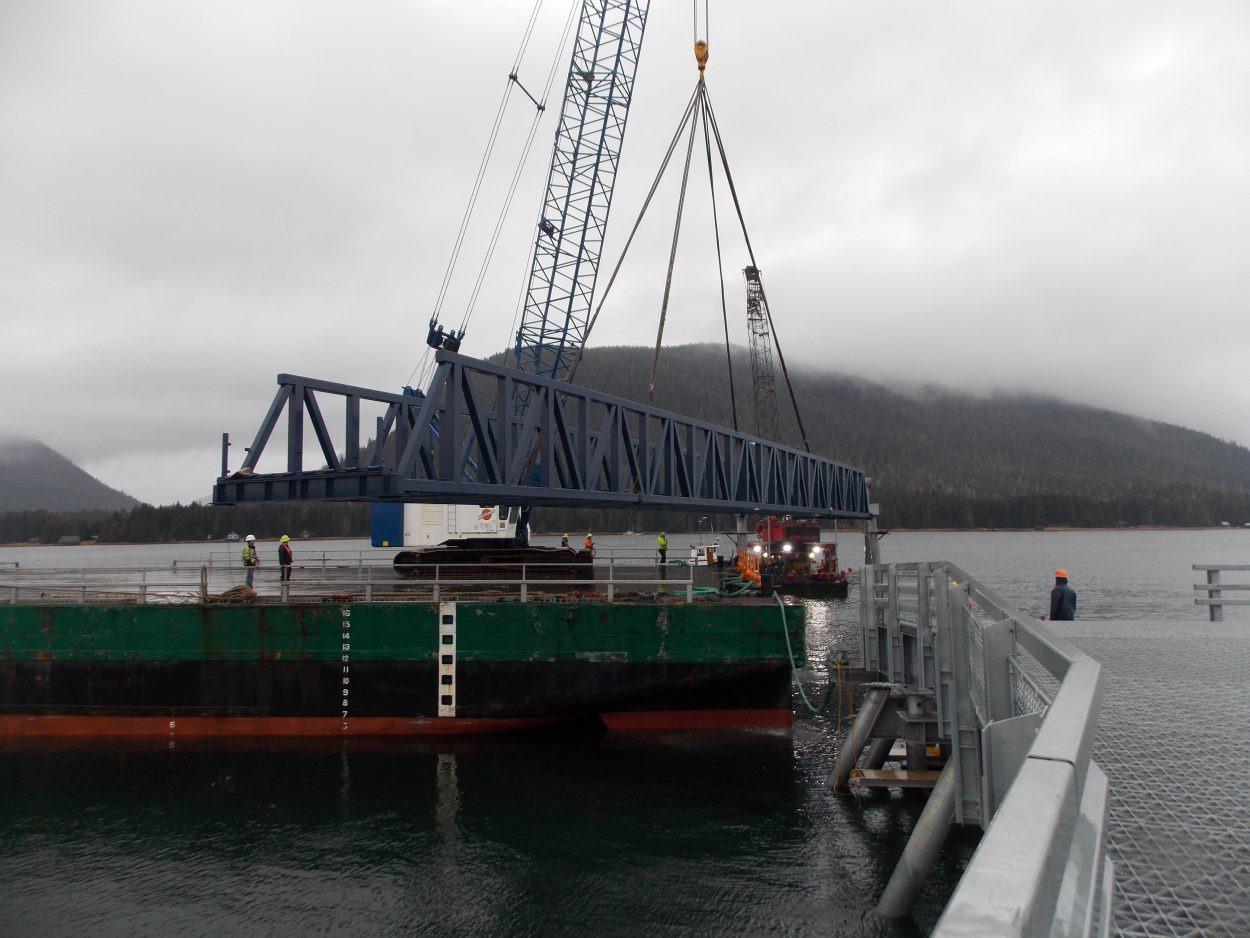 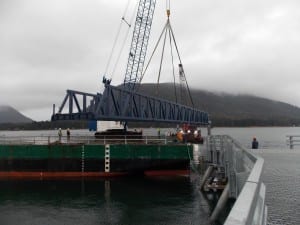 The transfer bridge to the drive down dock was installed in January. Photo by Joe Viechnicki

The final work is being done on Petersburg’s new drive down dock which is scheduled to open sometime later this winter but what will that mean for users? How will it all work? The borough’s Port and Harbor Advisory Board looked at some initial plans at their last meeting.

Harbor Master, Glorianne Wollen told board members that she has gathered rules from other drive down docks in Auke Bay, Sitka and Ketchikan and compiled a rough draft. She said she’d like to have something in place for when the drive down dock opens.

The purpose of the drive down dock is to be a temporary place for the public to conveniently load and unload gear from boats. It is meant for all boat owners.

Some board members voiced concern about the tour ships using the drive down dock but Wollen says most of that traffic is required to dock elsewhere because of homeland security.

There would be usage fees charged through commercial annual permits or one time use permits. Wollen estimates utilities for powering the dock and for its trash collection to be about $17,000 dollars a year.

“I can either go out and raise rates to the entire harbor to capture those costs or we could put forth the idea of a use permit,” Wollen says.

Wollen reiterated that the drive down dock policy is a work in progress that is meant to be revised. Assembly member, Kurt Wohlhueter, who attended the meeting, agreed.

Some of those proposed rules include a four hour time limit on the drive down dock. Overnight moorage is not allowed unless the owner contacts the harbor office for unforeseen circumstances. No overnight parking of vehicles is allowed either.

Using the drive down for vessel repair would be by reservation. There are two 60 foot areas that have power that would be designated for that and charges would apply. The board talked a lot about what that fee should be.

A flat $50 dollars was proposed but some thought that would encourage vessel owners to leave their boats.

Wohlhueter proposed $50 dollars in addition to the harbor’s transient moorage rate to encourage boat owners to stay on task.

“So that you don’t just park your boat there and sit and go, “Oh, my gosh, I’m paying $50 bucks, I’m out of here,”Wohlhueter says. “You know what I mean? So they leave, but they stay there and try to get that job done.”

The board discussed charging a dollar a foot per day for long term work reservations saying it would keep it simple.

One dollar a foot would be more than the transient rate which board members hoped would encourage vessel owners to use the dock stalls for longer projects instead.

The board decided to adopt the drive down dock draft as a guideline stating that they could change it as needed.

The dock is costing $7.8 million to build paid for by $10.8 million in state grant money.

The drive down dock proposals will be sent on to borough assembly to consider.

In other harbor business, the department is ordering 25 ladders to install throughout the harbors in high traffic areas for safety to help someone who’s fallen off a float to climb back up. They cost about three hundred dollars a piece, according to Wollen.