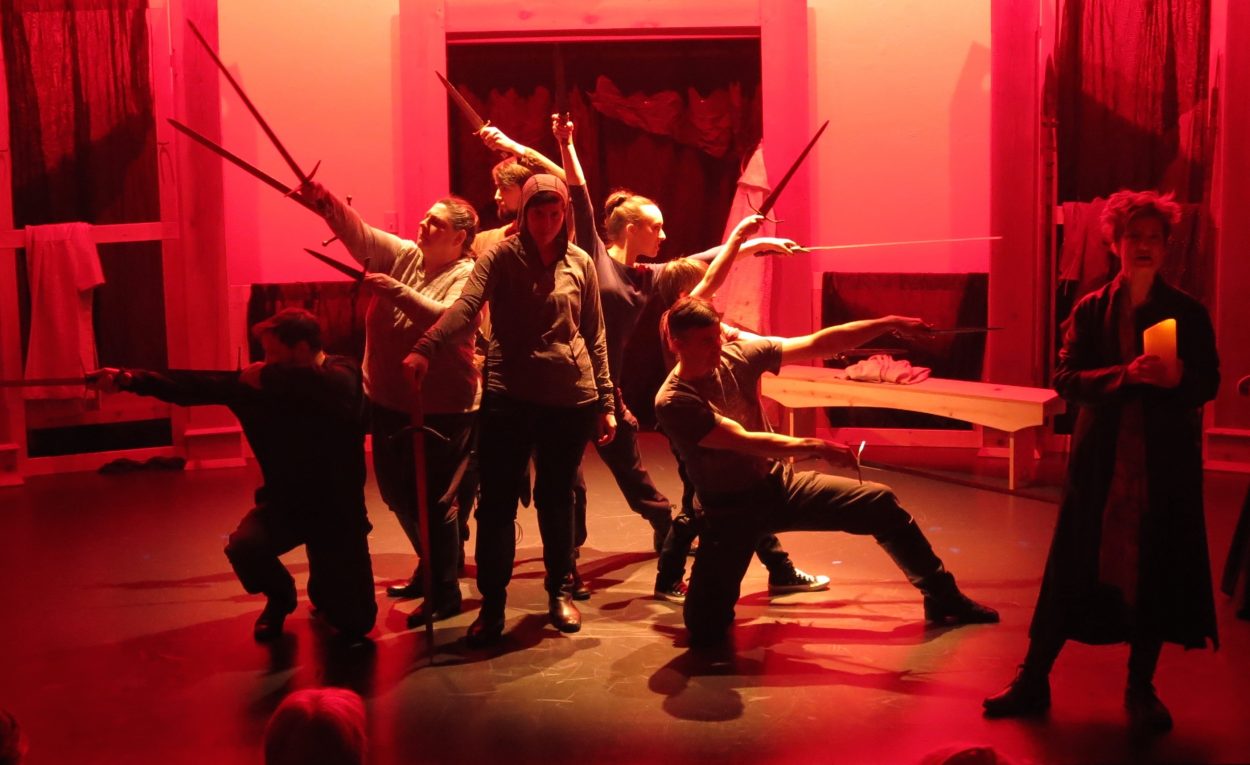 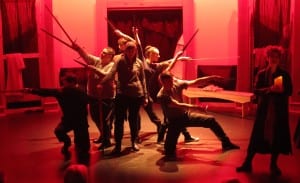 Henry V and Company are introduced by the play’s Chorus. Photo courtesy of Carl Brodersen

A Juneau theater group is coming to Petersburg this weekend to bring Shakespeare’s Henry V to the stage. Theater in the Rough will perform the play on Friday and Saturday nights at 7 p.m. at the Wright Auditorium.

Aaron Elmore is both director of the play and one of the actors. He co-founded Theater in the Rough about 25 years ago. He says they do about two productions a year. . .and to say they like Shakespeare is an understatement. This Henry V will be the group’s 17th production by the famous playwright.

The group was last in Petersburg in 2011 putting on the production of A Midsummer Night’s Dream.

Henry V is a play about one of England’s greatest historical figures. Elmore says it is about Henry V’s coming of age, becoming a king and taking on the enormous task of reclaiming the throne from France.

“Eventually what it leads up to is a very famous battle, the battle of Agincourt,” Elmore says, “and that battle is famous for, as much as anything, for being won by the English long bow men who were famously accurate, deadly and nasty in that regard and the cheek of the French nobility who gave up a good position on the field to basically lose the battle.”

That’s the historical aspect of the play. It was written over 400 years ago. Elmore says what that means for audiences is there are battle scenes.

“It means the swords are coming out and that’s one of the great funs about this particular piece,” Elmore says.

Elmore says the play also has marvelous language and some of the most famous lines.

“We few, we happy few, we band of brothers….Once more into the breach dear friends, once more…all those lines come from various parts of this particular play. It’s a wonderful play in that regards, it’s very rich in that regard,” says Elmore. 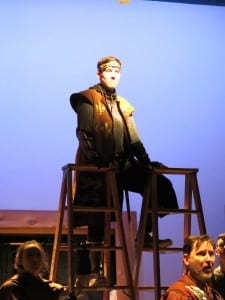 King Henry V is played by female actor, Hadassah Nelson with the group, Theater in the Rough. Photo courtesy of Carl Brodersen

The play entails about 40 different characters but Theater in the Rough is using just eight actors. And two of those actors are playing just one character. So that means about 38 characters will be performed by just six actors. Elmore says it makes for a unique and immediate experience.

“We’ve found with Theater in the Rough that most of the time, asking the audience to pretend with us, to imagine things they don’t see is some of the most fun for an audience to actually come and watch,” Elmore says,” and this play I guess in a lot of ways is one of the most quintessential Theater in the Rough plays that we’ve ever come along with because it does, it begs right in the text to use our imaginations, to bring this story to life.”

Elmore says the play is for all ages however there are battle scenes and deaths and ultimately, it’s up to the parents to decide if it’s appropriate for young children.

Again, the play is Friday and Saturday nights at 7 p.m. at the Wright Auditorium. Tickets are at the door or can be purchased in advance at Lee’s Clothing. They are $15 dollars for adults and $10 for seniors and students.