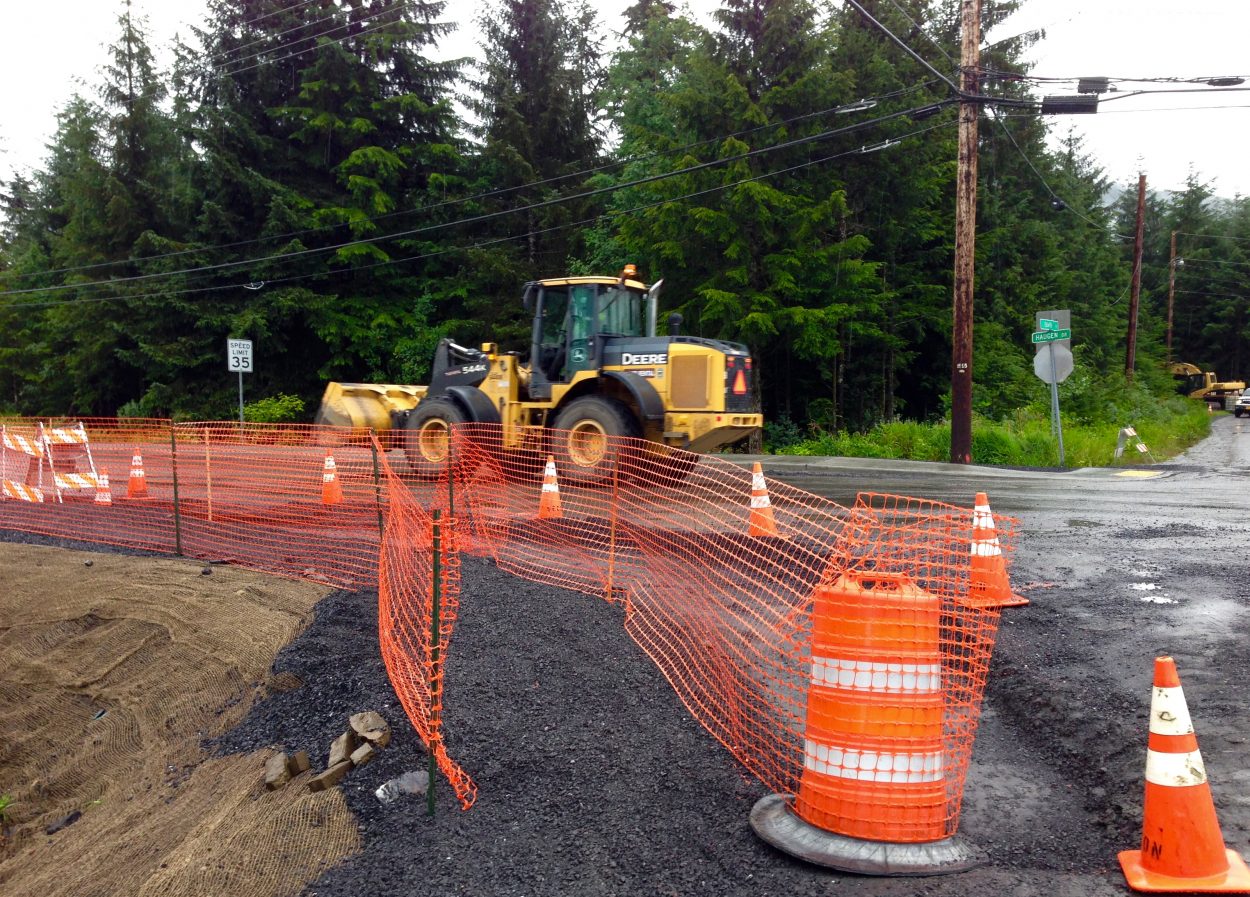 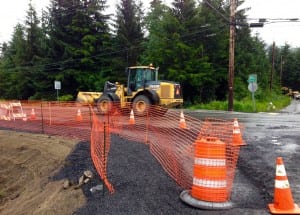 Road work will continue on Haugen Drive until the end of the summer. Photo/Angela Denning

Road construction along two main streets in Petersburg will continue until the end of the summer. As Angela Denning reports, the borough expects that all the work will not only improve the roads, but will make the town’s sewer system more reliable.
The sound of heavy machinery and the sight of bright orange flaggers directing traffic has been the norm in Petersburg’s for most of the summer. And residents might want to get used to it because it’s far from over.

The $8.3 million project is doing improvement work on two of the city’s main streets, Nordic Drive and Haugen Drive. The State of Alaska is paying for most of it through the Department of Transportation. The surface of the roads are being redone as are the sidewalks, curbs and gutters along-side them.

Meanwhile, the borough is working on the sewer lines that go underneath or nearby the two roads. That’s costing roughly $1.3 million of the project.

On Nordic Drive, the borough is moving a sewer mainline, which was running under South Harbor and buildings along the way.

Assistant Public Works Director, Chris Cotta, said the pipe is exposed in a couple of places.

“You know, it was installed under the beach,” he said.

That was 40 years ago. Since then the sewer line, which is made of iron, has rusted in spots. So the borough decided to abandon that old pipe and install a new modern one made of heavy duty plastic in a new location, underneath Nordic Drive, which is being repaved by the state anyway.

“To take care of those issues where it’s exposed and corroding plus we don’t know what a lot of the rest of it looks like. It’s under the beach which is a salt water environment,” Cotta said. “I mean if we ever had a problem with it in one of those locations it would be really hard to deal with. In addition to the corrosion issues there’s a lot of places where it would be next to impossible to access it.”

Meanwhile, on the other road, Haugen Drive, the borough is doing different sewer line work. The goal there is to prevent ground water from entering the sewer system.

Public Works Director, Karl Hagerman, said while overall the project is going okay, the borough’s portion of the project hasn’t been that great.

“Because just about every time that Rock and Road dug a hole in Haugen to do some work that was in the project we found something else that was wrong,” he said.

What the borough found were man holes in worse shape than expected. Another problem was wrong-sized pipes. They ended up being different than the ones shown on the borough’s utility maps once they were unearthed.

“It’s just been a little bit of a struggle to find things underground that you thought were a certain way and then you uncover them and you’re not,” Hagerman said.

While it’s been a setback, Hagerman said it’s maintenance that had to be addressed.

“Finding these problems at this time when the road was going to be repaved anyway is an excellent opportunity for the borough to address these problems and not have to incur the additional cost of repaving the road,” he said. “It would be much more expensive to do that than what we’re doing now, taking advantage of the state’s project and they’re going to repave the road anyway.”

So, the borough tacked an additional $80,000 to the project to repair the man holes.

The timeline for all of the road work looks like this: The state plans to be done with Haugen Drive by the end of August, early September, at least the road itself. They plan to come back next summer and finish paving the bike path. Nordic Drive will take longer. The state plans to continue work there through next summer. The borough will be done with its sewer work long before the state gets done with the resurfacing.

Secon is the general contractor doing most of the road work with local company Rock and Road helping with some of the dirt and digging.