Dungeness crab season not a patch on 2014 bumper harvest 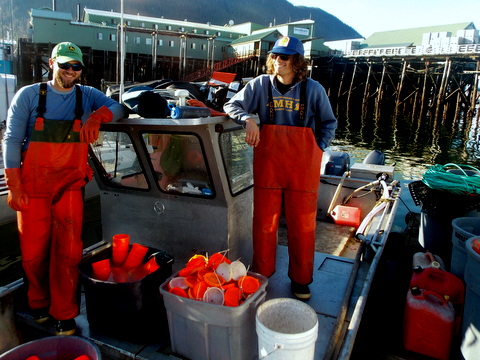 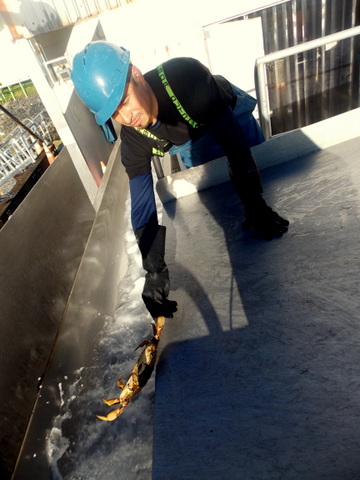 A crab sorter at PFI handles the last crab of fisherman, Tor Benson’s final catch of the season. (Joe Sykes)

Southeast’s Dungeness summer crab season ended on Saturday. There aren’t any preliminary numbers yet but it’s looking as if this year hasn’t got close to the bumper season crab fishermen had last summer. Joe Sykes spent a couple of hours on a Petersburg crab boat unloading for the last time.

Crab fisherman Tor Benson is waiting to unload his final dungeness catch of the season at Icicle’s dock.

It was a slow day and while he says he’s still making money:

“It’s getting to that point where we might not. It’s a good time to end,” he said.

Benson’s boat reeks from the stench of rotting crab bait after a long day out in the Alaskan sun. And deckhand Leif Mattern, cleaning bait boxes at the bow of the boat one final time says he’s glad it’s all over.

“We’re all jaded from last year. Last year was a great season. It’s hard when you do that well and then you come back and it’s not so good,” he said. 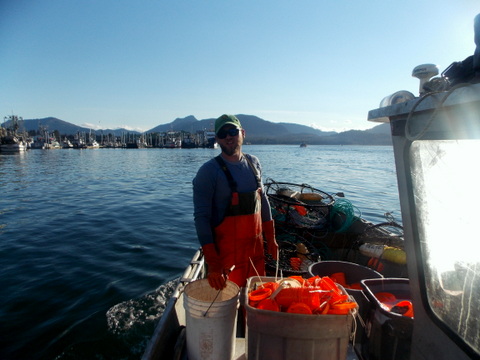 Leif Mattern cleans crab pots at the bow of the boat.(Joe Sykes)

Many crab fishermen say last summer will go down as legendary in the history of Southeast’s dungeness fishery.

Crabbers caught 4.06 million pounds earning a value of over 12 million dollars. That was more than double what they earned in the 2013 season.

And Benson says since fishing started in June he’s caught about 30% of the crab he brought in last summer.

“This year’s slow, last year’s an epic year, the best in a decade but that’s fishing, you have good years and you have bad,” he said.

And the numbers seem to show that rather than it being a bad year, the catch has returned to somewhere close to the average season yield. While the final week’s fish tickets have not been entered yet, the crab harvest through August 13th for the 2015 season is 2.56 million pounds, close to the 5 year average of just over 3 million pounds.

And Joe Stratman, who’s a crab biologist at fish and game says irrespective of the slowdown, crab quality has been good.

“We’ve had nice hard-shell crabs landed to processors. Crabs generally have been hard-shell and full of meat,” he said.

And much of that meat has been caught by an expanded fleet. Stratman says because of the bumper harvest last year, the number of permits reporting catches is 192, almost 30 more than average for the last five years.

While many of these numbers are preliminary it seems fishing hasn’t quite lived up to expectations.

And at Icicle’s dock a long, hard season has taken a toll on everyone. Juan works as an unloader at PFI and has dropped down from the factory to help take the crab up to be sorted for the final time.

I ask him if he’s pleased that the crab season is over.

And with that he starts transferring the dungies into his tote and another summer crab season scuttles swiftly to a close.

Tor Benson and Leif Mattern prepare to clean down the boat one last time. (Joe Sykes)