It’s halfway through the month-long moose hunting season near Petersburg, Wrangell and Kake and hunters have killed 54 bull moose so far.

The season opened September 15 and the first week of hunting saw 35 moose harvested from the islands and mainland in central Southeast Alaska. Seven of those in the first week did not meet the state’s requirements for antler configuration.

The harvest during the second week was 19 bull moose, with no illegal animals checked into the Alaska Department of Fish and Game. 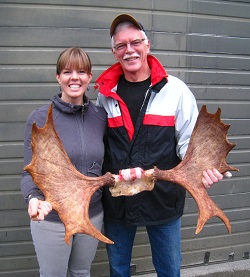 This year’s total of 54 is above last year’s harvest at this time of 51 moose. It’s a little below the record setting year of 2009. That year saw 57 moose checked-in by the mid-way point of the season and a total harvest of 109.

Alaska Department of Fish and Game area wildlife biologist Rich Lowell says typically hunter success declines in the second half of the season. It runs through October 15th. Lowell also reminds hunters to turn in their hunt reports if they’ve already shot a moose or don’t intend to hunt for the remaining two weeks.