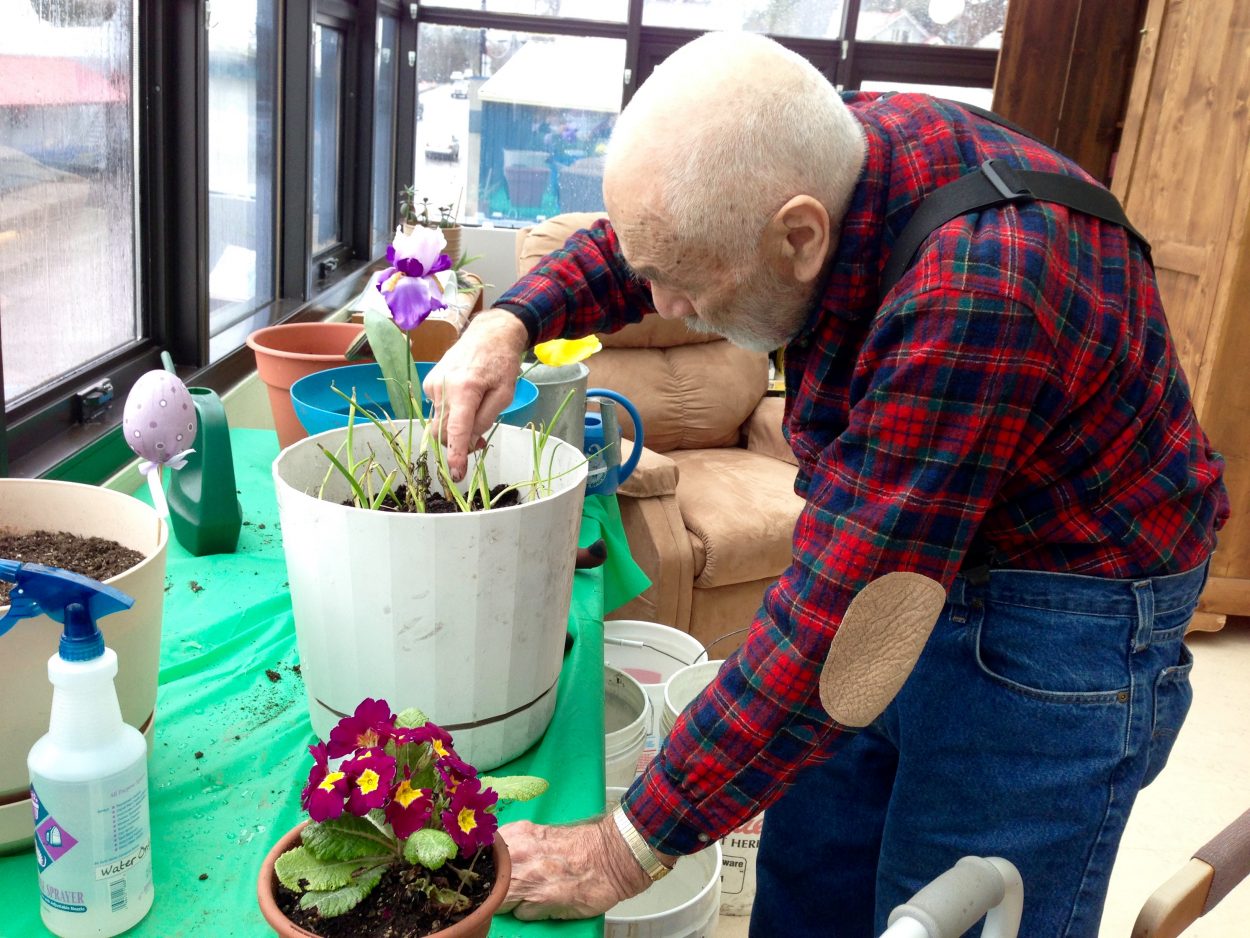 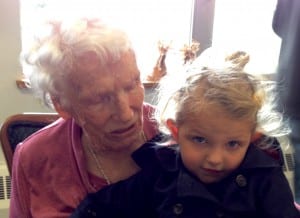 Petersburg’s Long Term Care unit of the hospital is in the process of adopting principals of the Eden Alternative Model. It allows residents more decision making and looks to deinstitutionalize nursing home care. Angela Denning reports:


Tora Thynes is celebrating her 91st birthday. She sits at the Long Term Care’s kitchen table in a pink sweater with her white hair curled. She’s surrounded by family and friends, the youngest being her two year old great-grand daughter. Thynes listens as they all sing her Happy Birthday and then her friend, Roxy Lee, helps her open a present.

Thynes was born in Norway and moved to Petersburg in 1947. She’s been living at the nursing home now for about three years. 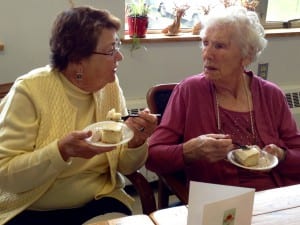 Also in the room is resident, Annie Lewis, who’s 90. Unlike a lot of seniors in Petersburg, she’s not Norwegian.

“No, I’m Japanese, Swede, and Tlingit,” Lewis said, laughing. “And I married an Irishman, I’m international.”

Lewis loves to laugh. One of the reasons she says she likes living at the home is because of all the parties. She loves ice cream more than any other food.

“It’s good for you, there’s cream in there,” Lewis said, laughing again. “It might have a little bit more sugar.”

Lewis was born in a tent near Blind Slough while her dad was out fishing. She’s not sure exactly how long she’s been at Long Term Care. She says she has a home in town.

“But the bathroom’s upstairs,” Lewis said.

She says she enjoys riding in the home’s van traveling all over town. Her favorite place to go these days is church.

Jennifer Bryner is the Director of Nursing for the Petersburg Medical Center. She says the changes they’re making help counter boredom and the loss of purpose that’s often felt when seniors go into an institution.

The Eden Alternative encourages independence as much as possible. The model is based on Dr. William Thomas’ book, “Life Worth Living.” It tries to bring normal life into the facility like small pets, kids, and plants, and not worrying so much about keeping things sterile.

“The people in his long term care actually had fewer infections, they were more mobile, fewer pressure ulcers with their skin because they were up and had a reason to get up and move and interact,” Bryner said.

She says it’s easy to get caught up in safety issues. Children often want their parents helped everywhere while the residents enjoy their space.

Tora Thynes slowly walks her way down the hall to the solarium. While she likes to relax in the well-lit room others at the home like getting their hands dirty. 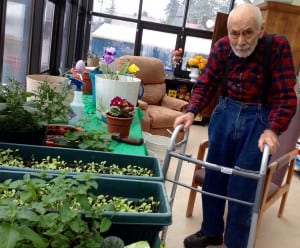 Ray Olson stands in the solarium with some of the plants he’s growing. Photo/Angela Denning

As resident, Gladys Olson, likes to say, “It takes certain people to plant a garden (laughs).”

One of the gardeners she’s referring to is her husband, Ray Olson. He’s sitting next to her wearing a red flannel shirt with leather patches on the elbows.

“We got a little bit of everything growing out there,” he said. “Well some of its just seeded, like the lettuce and there’s the kale, and lettuce.”

Using his walker, Ray gets up and fills a watering can to give some of the plants a drink.

“This is lettuce. This is radishes, that’s kale in there,” said Olson. “Then there’s some onions growing here. I don’t know how they’re going to do. I just started them this morning. They just started this.” 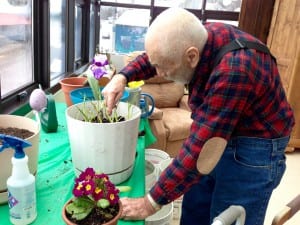 The rain beats down on the clear ceiling but inside the solarium it’s nice and warm.

“When did you get into gardening?” I asked him.

He laughs in response.

“Just been monkeying around here with it. That’s all, something to pass time,” Olson said. “It’s kind of interesting. You know, you’re just planting it here and seeing what you get.”

One resident that does have experience is Don Kenney. He’s in the room in his wheelchair.

“I used to do it up in the Arctic, above the Arctic circle,” Kenney said.

What were you doing up there?” I asked.

“Panning for gold,” he said.

Kenney had a farm near Coldfoot, Alaska. He said he grew everything in his garden.

Now Kenney enjoys watching as Olson checks on some green onions in a pot.

“What are you guys going to do with it?” I asked. 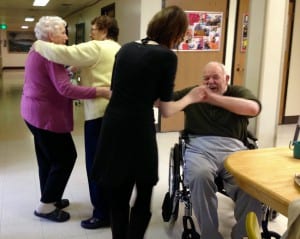 Back inside the home’s living area, piano music fills the air. Regular visitor, Sigrid Medalen, plays the keys while some residents clap along. Tora Thynes takes a spin with her friend Roxy and, from his chair, Don Kenney dances with a staff person.

As the plants grow this summer in the solarium residents will eat the harvest and they will wait for some new residents to arrive–pet birds.