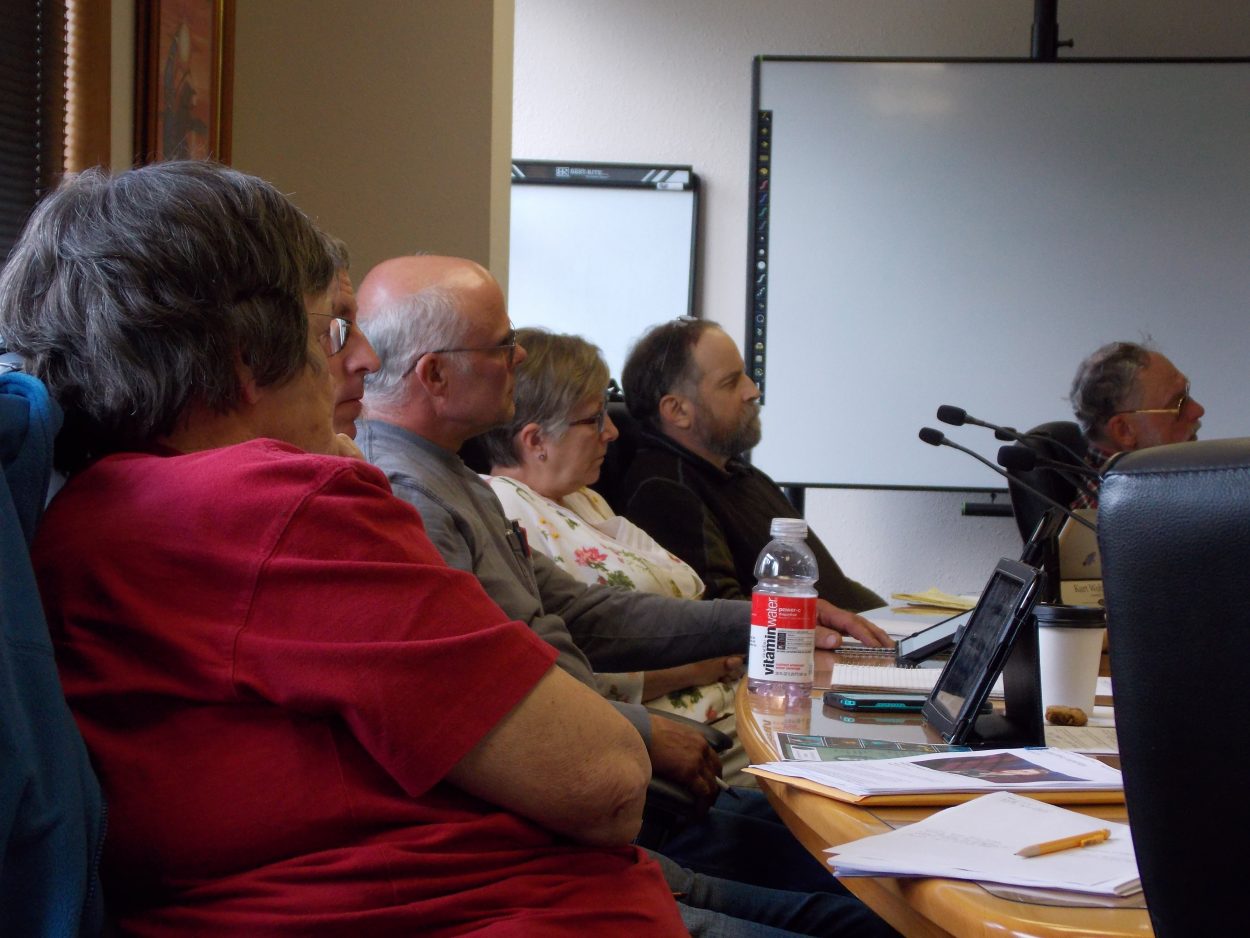 Petersburg’s borough assembly Monday voted not to send a list of questions on prohibiting or regulating pot businesses to local voters in October. The assembly also voted to keep advancing a local ordinance to regulate marijuana businesses in line with the local law for alcohol establishments. And for now, language allowing for on-site consumption at a retail pot store remains in that local ordinance.

The mayor and assembly have asked for public input on regulating pot businesses in Petersburg and they’ve gotten it – over an hour of public testimony on the issue last month and again this month. Commenters for the most part debated the merits or evils of allowing pot sales in the community and whether the public this fall should take a vote on prohibiting legal pot sales here.

“I’m not for opting out,” said Suzanne Wood.

“We are both adamantly opposed to commercial sales of marijuana products especially in the city of Petersburg,” said Rick Williams, speaking for himself and his wife Jill. “We have our grandchildren that we’re concerned about walking up and down the streets.”

“I am for putting this on the ballot and that’s what I’m addressing,” said Marietta Davis. “And the smoke free air act in our community, how was it decided? It was decided by vote and it was decided by the people. And it should not just be something that is amended or taken or thrown out or tossed by an assembly, executive action. We see a lot of executive action lately.”

“I’m excited to be in my hometown, talking about our future and the new industries that could come from legal marijuana,” said Chelsea Trembly, PHS class of 2006. “So thank you for all your work on this issue, I know it’s been a lot of time and maybe a few head aches. The state of Alaska had the third highest voter turnout in the nation in 2014. So yeah it was lower than a presidential year and maybe some of the people in this community forgot to vote and so they feel they didn’t have their say on that issue. So right now pot is legal in this state and 58 percent of those who showed up in Petersburg agreed that we should legalize it.”

“I’ve seen a lot of things happen over my lifetime,” said Robert “Doc” Lopez. “I’ve seen the influence of alcohol and drugs of assorted kinds. I’ve seen people at their lowest in conditions are very compromising. That’s not the issue. What I wanna bring before this body is the fact that I didn’t know anything about an opt out option. I wasn’t informed. I didn’t know that it was a possibility.” 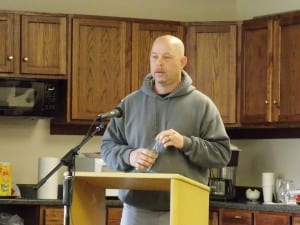 Gary Morgan, who has applied for a cultivation license from the state for a business near Papke’s Landing, 10 miles south of Petersburg, testified against a pot business prohibition Monday.

Assembly member Kurt Wohlhueter proposed a list of potential questions for the October ballot. He wanted to know whether voters in Petersburg wanted to prohibit recreational pot sales or prohibit sales of medicinal pot products, including oils and concentrates. His other questions covered whether the borough should allow a smoke shop or the sale of edibles. On the zoning issue, he wondered whether a pot business or smoke shop should be allowed downtown. He also wanted to know whether voters want to levy a local tax on pot sales.

Wohlhueter did not think those were decisions the assembly should be making. “That’s not putting the entire onus of the marijuana ordinance on seven of us,” he explained. “We have just usurped the voters right to include their voice in a October ballot, which the state gives us clear right, clear directive that if we allow it as an assembly we can ask them for their input. I’ve lived in this town for 37 years seeing how everybody’s throwing around numbers how long they’ve been here. What’s another 3.7 months to figure out what the people want.”

Under the state regulations, voters in a municipality like Petersburg can vote to prohibit the sale or importation of marijuana or any pot product. Voters can also prohibit any one of the four different kinds of pot businesses licenses – a retail store, grow operation, pot manufacturing facility or testing business. And it doesn’t have to be done by a vote of the public either – the borough assembly can enact any of those prohibitions by passing an ordinance. Another interesting part of the regulations – if borough voters decide to prohibit pot businesses, any licenses already issued become void 90 days after election results are certified.

Assembly member Jeigh Stanton Gregor opposed putting Wohlhueter’s questions to voters this October. “If we put this on the ballot right now, my take is we’re telling the voters who voted for this in the fall of ’14 you’re not smart enough to make your own decisions,” Stanton Gregor said. “All the people who’ve given us feedback to this point, you’re not smart enough. In fact you’re too dumb. This isn’t gonna work. That’s a ridiculous premise to operate from. I think the electorate is extraordinarily intelligent, have been extraordinarily thoughtful and have given us extraordinarily amount of feedback about how to do this right. And again that’s how we came up with the ordinance.” 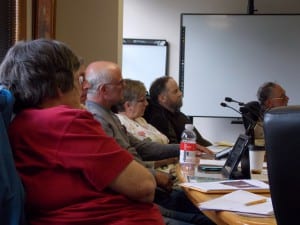 The vote was 6-1 against putting the questions to voters with only Wohlhueter supporting a vote. That means unless something changes by the assembly’s next meeting, June 20th, it will be too late to submit questions for the October 4th ballot.

However, nothing prohibits the issue coming up again in the future. A future assembly could enact prohibitions on pot businesses – or local residents can force the issue with an initiative petition during a future special or regular election after this fall. Any prohibition that’s enacted can also be removed or changed in the future as well, by public vote or assembly action.

Meanwhile the assembly also voted to keep moving forward with a local law regulating pot businesses. Language allowing marijuana establishments has been added into Petersburg’s ordinance that regulates bars and liquor stores
The state’s Marijuana Control Board is in the process of adopting regulations for on-site consumption. Draft regulations spell out how a business can apply for such a license and the requirements, including ventilation for a smoke shop. The state is taking public comments on those proposed regulations through June 21st and there’s more information on the Board’s website.

Assembly member Cindi Lagoudakis wanted to remove the possibility for on-site consumption at a retail pot store within the old city limits. “My issue is that I don’t believe they’ve established a legal limit for having ingested marijuana or marijuana products. By not allowing it downtown, you avoid having to enforce anything about how much someone has consumed.” She only got only one other vote, Eric Castro, to support that change and it failed.

There was support for advancing the ordinance itself without that change. Stanton Gregor again referred to the voting margin for the statewide measure among Petersburg and Kupreanof voters in November of 2014.

“In a general election 58-42 is generally called a landslide victory,” Stanton Gregor said. “We can quibble about the numbers and the turnout but those are just details. It was a very large victory giving us a mandate to carry out the will of the people at this point. And I think this ordinance this ordinance is a very accurate and thoughtful and I’d say restrictive reflection of the will of the people and a really sound marijuana ordinance. I’ll definitely be voting for it at this point.”

The ordinance in second reading passed unanimously and still has one more reading before the assembly later this month.
In a related issue, the assembly also passed the first reading of changes to the smoke free air act to allow a marijuana smoking room to operate locally. Those changes also have two more readings before taking effect.