A multi-million dollar project to increase hydro-electric lake storage for three Southeast Alaska communities is underway this month. During the work, the Southeast Alaska Power Agency’s Swan Lake hydro plant near Ketchikan will continue generating power for Wrangell, Petersburg and Ketchikan. Board members of that organization heard this month that the start of the project was threatened by difficulties with lowering the lake level this spring.

The project is expected to cost around 11 million dollars for raising the water level at the Swan Lake near Ketchikan. It’s one of the main hydro-electric sources for the three communities.

Eric Wolfe, SEAPA’s director of special projects told the board that the work would mean a 30 percent increase of water storage at Swan Lake and also increase capacity at SEAPA’s other plant at Tyee Lake near Wrangell.

“Swan is going to accept and be more of a dominant role for a while because of the Swan Lake raise,” Wolfe explained. “We’re gonna turn down Tyee more often. We’re gonna fill more at Tyee in the short term, the next five years. And that’s gonna do two things. It’s gonna increase storage, you have more contingency and it’s gonna increase capacity at Tyee.”

To raise the lake level at Swan, construction crews with the Seattle company Pacific Pile and Marine will be installing large panels across the top of the spillway at the Swan Lake dam this summer. That spillway is normally where excess water flows out of the lake. Low electrical demand from a warm winter and a wet spring meant higher than expected water levels in both of SEAPA’s lakes just before the start of the project. 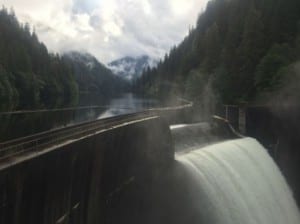 CEO Trey Acteson explained that the lake level was a concern just before the start of the work.

“When Pacific Pile mobilized that first weekend I mean we had water up on the spillway,” Acteson said. “And this did hamper some of the pre-construction activities. I mean they’ve gotta build, put anchors on, put the safety walkways up, and these were all the functions that had planned to be taken at that time.”

While construction is underway, the spillway is not an option anymore, only generating electrical power. To that end, SEAPA has leased a piece of equipment called a load bank for the duration of the project. SEAPA officials describe it as a giant toaster, no kidding. It uses electricity from the system and powers a bank of heaters and fans. Its job is to reliably and steadily draw power from Swan Lake. 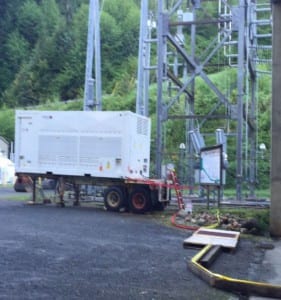 SEAPA has leased a load bank for using power at Swan Lake during the project. Photo courtesy of the Southeast Alaska Power Agency)

Acteson said prior to the project he asked to sell more power to Ketchikan Public Utilities to lower the lake level – and was told KPU was not required to purchase that electricity under a power sales agreement between the utility and SEAPA. Acteson wanted to remind the SEAPA board that the project was voted Ketchikan’s top project priority and his organization has put a great deal of time and money into it.

Under the power sales agreement, Ketchikan and Petersburg both own other cheaper electrical sources that the communities are allowed to use before buying SEAPA electricity. SEAPA was asking KPU to buy more from Swan Lake and use less of its local power resources.

Ketchikan mayor Lew Williams III is chairman of the board of KPU and a SEAPA board member. He likened the situation to problems between the city and borough governments in Ketchikan. “I mean they give you these woe stories about how awful the other guy is and then you go to the other guy and hear how awful they are. And all I ask for them to do is work together and get it done for like there supposed to do their job. And I hate it when all I do is hear oh this and oh that and I hear it from both sides. And just do the job and if you have a problem like I told Trey call me and I’ll get everybody like we did to sit down and figure it out.”

Another board member, Stephen Prysunka of Wrangell was frustrated with the lack of cooperation too and he wanted to correct any impression that Wrangell and Petersburg were not onboard with the Swan Lake project. “What bothers me with this is that our community voted overwhelmingly to support this project and to put our lot in with this bond and to make sure that this project moved forward,” Prysunka said. “I’m disappointed as well that this wasn’t worked out long before we mobed up because I’m feeling very trapped that we have all this stuff sittin up there and we haven’t even worked out how we will bleed down the lake ‘til last week. Should’ve been done a long time ago.”

“I agree with you whole-heartedly,” Williams responded.

Prysunka said in the future he didn’t want to proceed with any project until all these issues are worked out. “I have raised this as an ongoing concern that the level of cooperation from Ketchikan on various issues has been poor. Now there may be another side to that story but I don’t like it and I don’t like where it’s heading. Now we’re jumping in bed on this huge project with a lot of money and it makes me very nervous for my community.”

For his part KPU electric division manager and SEAPA board member Andy Donato said the local utility tried to take as much electricity as possible to help draw down Swan Lake. “The unfortunate thing is, I think operating this utility or KPU, KPU also has a business plan,” Donato said.. And I think what you saw here, as this approached the final due date, each wants to optimize water, water issues, generation, etc.”

In May the Ketchikan city council authorized KPU to spend an additional 350-thousand dollars to purchase power from SEAPA and help with the lake draw down.

Managers say the lower lake level was achieved and the project was able to start. They are hoping to lower Swan Lake even further to protect the crews working on top of that dam in case of any big rains this summer. Pacific Pile and Marine has brought equipment and to the site and has started cutting into the top of the concrete spillway. They’ll eventually be installing 15 flashboards or panels, 17 feet high weighing around 1000 pounds apiece. Those panels were built in Austria and are being shipped to Ketchikan. The work is scheduled to be finished in October. 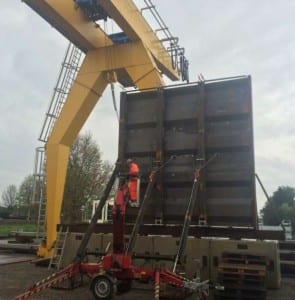 The15 flash boards that will be installed on the spillway of the dam were built in Austria. (Photo courtesy of the Southeast Alaska Power Agency)