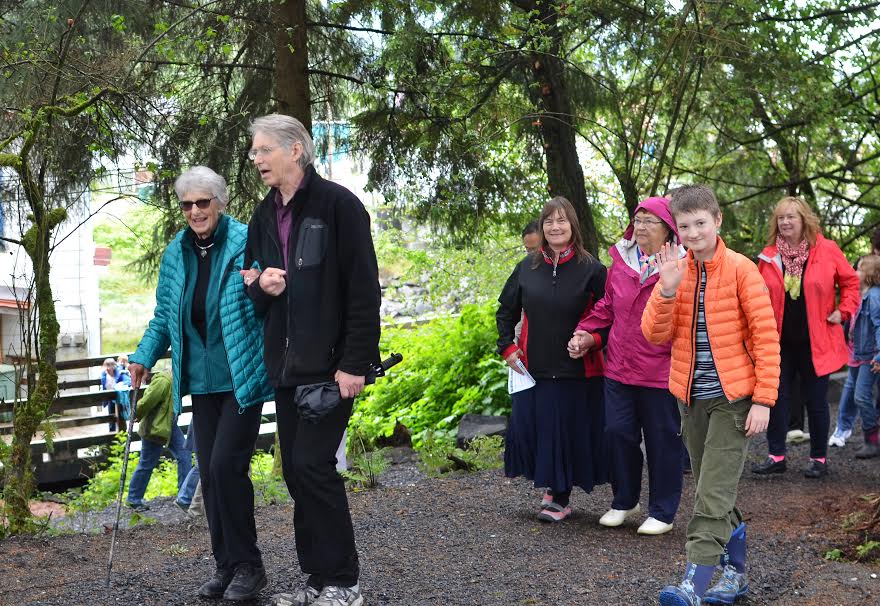 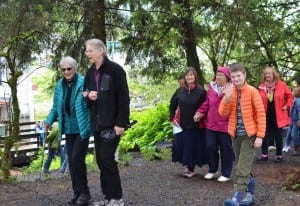 Polly Lee and her son Eric led the procession from Hammer Slough to the library, through Centennial Park. (photo/Orin Pierson)

This weekend the public library will celebrate its recent landscaping, public art, and the opening of a new park for Petersburg that sits on land with deep roots in the town’s history. Abbey Collins reports. 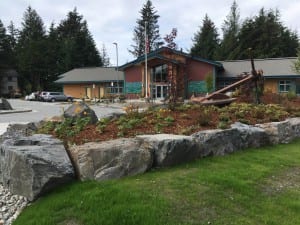 Sue Paulsen, president of the Friends of Petersburg Libraries, says it’s going to be a great day and it all starts on the Birch Street boardwalk that runs along Hammer Slough.

“And it is there that we are going to meet up with Polly Lee and other members of her family and everyone else we can find that will love to attend here,” says Paulsen. “And then we’ll have a special ceremony to open Centennial Park.”

The land for Centennial Park was given by Polly Lee and her late husband Eldor in 2008. Alcock says Lee donated the land to the then-planned library project, though the library itself wasn’t yet built.

“It was amongst the first significant donations to the project,” says Alcock. “So it was really important at the time, it really launched us in a lot of ways.”

The spot where Centennial Park was built was once the home of Harold and Magnhild Lee, Polly Lee’s eventual in-laws. According to Lee, her husband’s father Harold came to Petersburg from Norway in 1902.

“He built a bachelors shack in Hammer Slough,” says Lee. “And then he built a boat called the Rival. Then after a while, a few years Magnhild Lee was encouraged to come up here and help her sister who was running a restaurant here.”

Harold and Magnihld later married and started a family on the property.

“Grandpa Lee enlarged the bachelor shack to be a nice little house on the slough,” says Lee. “Then they had their family. Eldor was born there.”

According to Lee, the two were very involved in the town – in politics and in the community.

At one point, Lee says Harold and Manghild moved up the hill away from the slough, but they still owned the original property. She says the land changed hands over time but eventually came back to the Lees. Now, she says she thinks Harold and Magnhild would be delighted to see the land made into a public park and hopes the Petersburg community will enjoy the new space.

“We’re hoping that people will stroll through there for convenience and pleasure,” says Lee. “It’s designed and intended to be a park for the people. We hope people will love it and care for it from now on.” 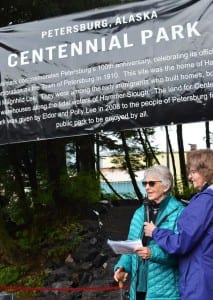 Saturday’s celebration doesn’t end at the park, where Lee will cut the ceremonial ribbon and officially open the space. Paulsen says the gathering will then move toward the library.

“Then we’ll climb the hill on the pathway of Centennial Park. At the summit we’ll meet a very good gardener and she will lead us around the newly completed landscaping and talk a little bit about the plants that have made it look so very fine,” says Paulsen. “And as we circle the building we’ll see the special areas on the outside of the library because a building has an inside but the outside can be a functional space as well.”

From there, the celebration will move into the community room for a celebration of public art displayed around the building.

“And there everyone’s invited to take a copy of a guide to the artwork,” says Paulsen. “We’re hoping the artists will be standing by inside the library to answer any questions and talk about their artwork.”

According to Alcock, the funding for both the landscaping and Centennial Park came from a few different sources, a combination of state and local funding.

“The landscaping and Centennial Park was funded by an appropriation from the State of Alaska,” says Alcock. “So it was money intended for the construction of the new library. As well as donors. A lot of plants that you see now being planted, this was all donations by individuals and businesses to the library project.”

Alcock says Chelan Produce provided plants, borough groundskeeper Jesse O’Connor worked on the new landscaping, and Reid Brothers did the rock work around the front of the building. She’s thankful for the people and companies that made the projects a possibility.

“We had a really great group of folks that came together to make this all happen,” says Alcock. “I think they all deserve equal acknowledgement. We couldn’t have come out with such an amazing end product without them all being a part of it.”

A lot of work has already been completed at the library, and though it may seem like polishing off a finished product, Alcock says work doesn’t stop here.

“Libraries are always evolving so I’m not sure done,” she says. “The most important part is done, the biggest part is done but we’ll continue to evolve and grow and improve it.”

Alcock says in the next phase of work the library hopes to build a covered shelter outside the building, and to install some benches in the new park. They are also working with the Sitka-based master carver Tommy Joseph on building a new totem pole.

The event will take place from 11AM-Noon this Saturday. Visitors are asked to gather on Birch Street boardwalk at the entrance to Centennial Park a few minutes before 11.