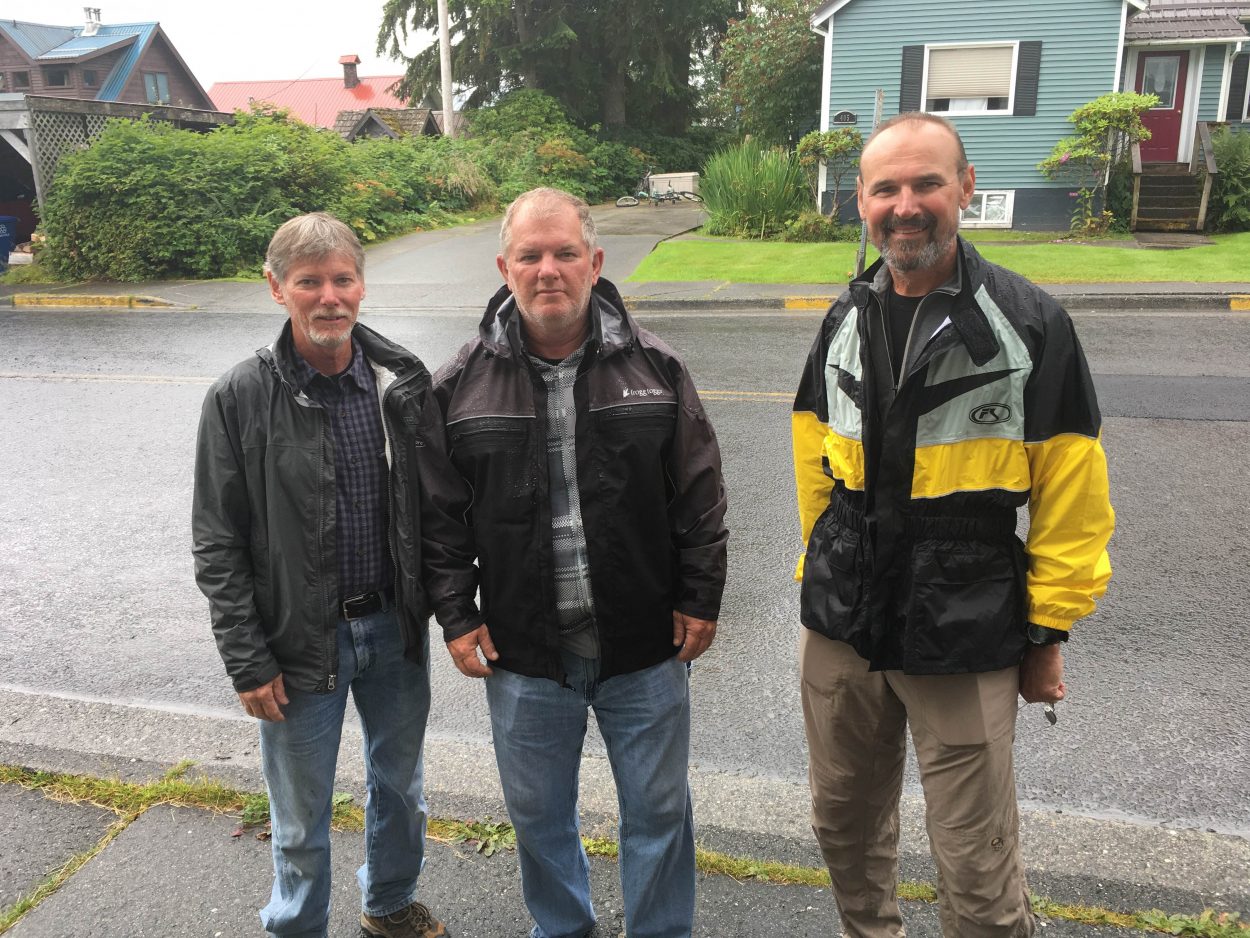 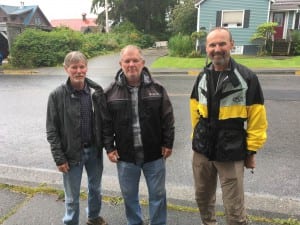 Joe Yuhas and brothers Steve and Larry Banwart were stranded in Petersburg after the Columbia ferry broke down on Wednesday. (Photo/Abbey Collins)

Nearly 200 passengers were stranded in Petersburg this week after a mechanical issue on one of Southeast Alaska’s main ferries caused it to stall there Wednesday morning. KFSK’s Abbey Collins met a few of those passengers before they left town late Thursday night.

Larry Banwart and his brother Steve were living the dream – riding their motorcycles up the Alcan from Phoenix.

“I had a three week vacation, my brother came down to meet me,” says Banwart. “And we decided we were going to ride our bikes to Alaska.”

They reached Alaska and boarded the Columbia ferry to head back down to Bellingham, Washington. That’s when they hit a snag.

“I called my boss this morning and told him I’m going to be a few days back to work,” says Banwart.

That’s because they were stuck in Petersburg after the ferry broke down Wednesday morning. Banwart says passengers have been told the best case scenario gets them to Bellingham, Washington Saturday evening.

Alaska Marine Highway System spokesman Jeremy Woodrow says a mechanical issue with the ship’s starboard engine required the ferry to remain moored. That issue has since been resolved and the boat sailed to Ketchikan late Thursday night. It’s expected to depart for Bellingham about 48 hours behind schedule.

The Columbia is one of Alaska’s main ferries, running routes between Skagway and Bellingham. It will now be running on a revised schedule through the end of the month. The ferry will then be dry docked in Ketchikan for a few days while an oil leak is repaired. It’s expected to be back up and running on August 3.

While waiting in Petersburg, passengers were provided free meals. As far as sleeping goes, Woodrow says people are given staterooms if they are available. But some, like the Banwart brothers, slept in tents – others wherever they could find a spot.

Steve Banwart says he doesn’t mind the camping or the delay.

“I don’t have a job so I have nowhere to go. Doesn’t matter to me if we get stuck here for another week,” says Banwart.

Joe Yuhas, a motorcyclist from Minnesota, says he’s not too concerned about getting home later than expected, but he did have to cancel all of this reservations for his road trip back.

“So based on whenever we land I’ll reschedule everything to get home,” says Yuhas. “All my hotels have been cancelled. I’m freewheeling it all the way home from here.”

There were a few alternatives for people – other ferries and some flights. But for those headed to Bellingham, the Columbia is only ferry option.

Yuhas and the Banwarts have their motorcycles on the ship, so they stayed on board until the engine started running.