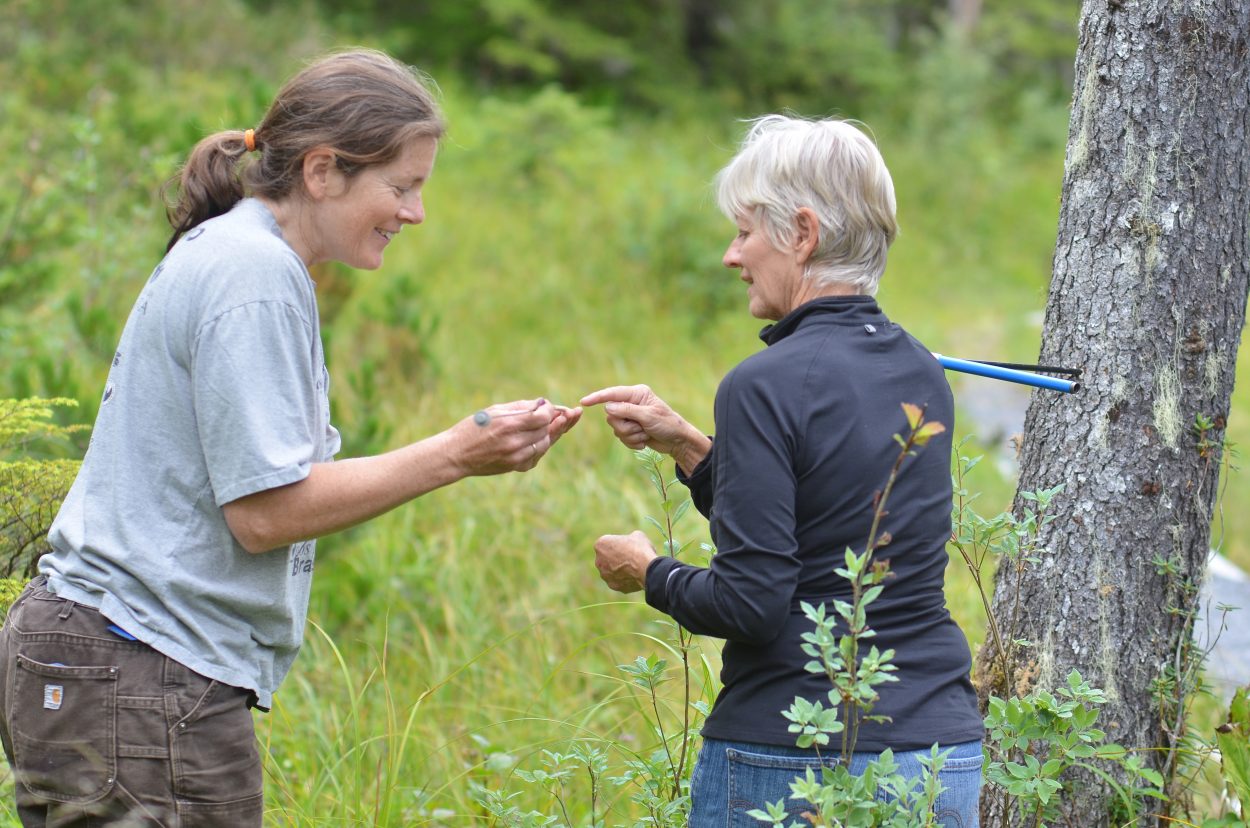 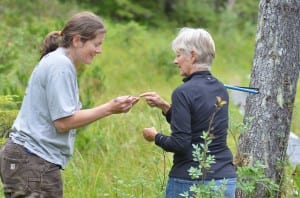 Earlier this month, the U.S. Forest service celebrated the 50th anniversary of the National Historic Preservation Act with a picnic celebration at the Three Lakes Shelter near Petersburg. Abbey Collins made the trip out the road to see science, history and community come together in the woods.

You can get to the Three Lakes shelter in as many ways. By the Crane, Hill or Sand Lake trails. When I get to Sand Lake, the road in front of the trail head is packed with cars. It’s Friday, and a big turnout for the middle of a workday.

Walking the Sand Lake trail to the shelter, it’s fitting to be hiking on the boardwalk carefully constructed by Forest Service crews to improve the trail. I wore the wrong shoes for a hike – canvas flats with little traction – but on a dry day it’s no problem on the boards.

Members of the Petersburg community are out here today celebrating the 50th anniversary of the National Historic Preservation Act. It also feels like a celebration of the Forest Service’s role in recreation around Petersburg. 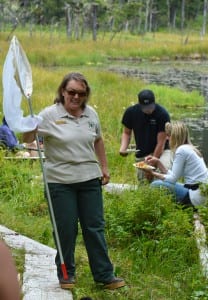 Kids are running around, collecting water to examine closer up. Some, like Art, are carrying around big nets, trying to catch dragonflies.

The Three Lakes Shelter was built in 1938 by the Civilian Conservation Corps, an organization born out of President Roosevelt’s New Deal. Even back then, the structure was used for recreation. It also helped provide access to isolated spots.

In 2006 the Petersburg Ranger District did a historic restoration of the building, fixing it up but keeping a lot of the original parts. 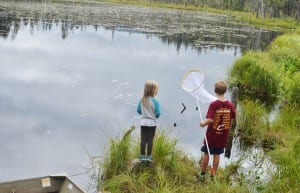 Kids tried to catch dragonflies on the shoe of Shelter Lake. (photo/Orin Pierson)

It’s a warm day, though not as sunny as the forecast said it would be. A few drizzles of rain here and there. The wild blueberries are ripe. And the activities are not just for kids. A group of adults cores a tree with botanist Joni Johnson.

It’s a way of determining the tree’s age without cutting it down. They’re inserting a small, rounded instrument the trunk. It’s a tall tree, but its trunk is not very wide.

“You slide it in upside down. It goes into the tube,” says Johnson. “Yep, yep. And then right here if you just hold it so you don’t bend it and slide it down. And all the way in as far as you can go. Then go ahead and back it off just 180 degrees. And that will break the core free and the reason it’s only 180 degrees. You can see the bevel is facing up so when the core comes out it doesn’t fall.”

They remove the tool and the core and count the rings.

It turns out to be around 60 years old, plus or minus 10 years they estimate. 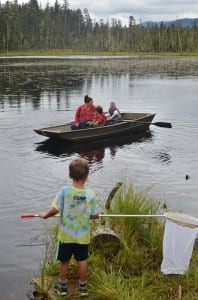 The Three Lakes shelter sits just off of Shelter Lake. Today, the three-sided Adirondack-style structure is mostly being used to hold food. Outside, visitors roast hot dogs over the fire pit. Down by the lake the Forest Service’s Linda Slaght is on dragonfly duty.

“We’re showing them to the kids, how to handle them safely, how to identify them,” says Slaght. “I caught a lake darner which is one of the biggest ones. Then there’s quite a few of the damsel flies which are much smaller and easier to catch.” 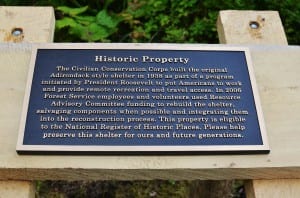 Amid the fun activities, the Forest Service unveiled a historic property plaque at the shelter, marking its place in the Tongass’ past and asking the community to help preserve it for the future.