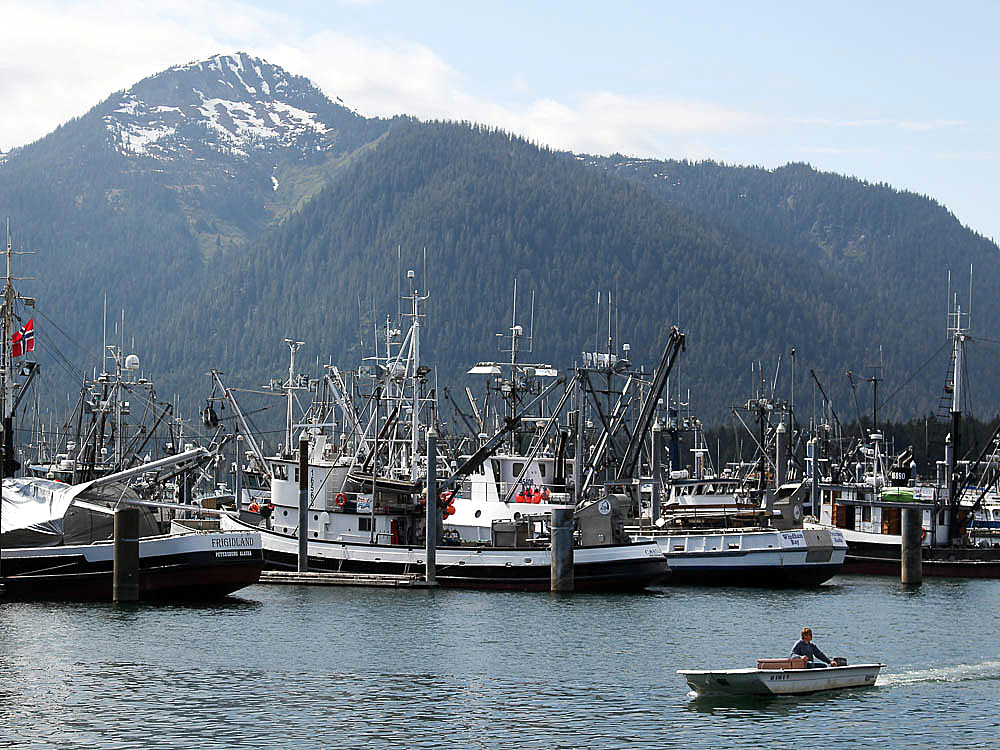 Petersburg is pursuing a feasibility study with the Army Corps of Engineers to dredge one of the town’s main harbors. Angela Denning reports:

It’s easy to tell that Petersburg is a fishing town if you look at the harbors. With just 3,000 residents the town’s harbors hold 577 stalls. And over 90 percent of the fleet is commercial.

Of the three main harbors, there’s a growing problem with the south one that holds many of the larger boats.

Harbor Master Glorianne Wollen told the borough assembly that there have been an increasing number of boats going aground.

“The bottom of the harbor is getting higher and so I’m having more and more of our boats going aground on certain stages of the tide,” Wollen said.

The cause of the rising basin is unknown but the problem is getting worse.

“Fifty-eight foot boats is primarily what we’re bringing in and out of this area. Some of our bigger boats get up to 100 feet,” said Wollen. “These boats are drawing 10 to 12, 13 feet of boat underneath them at a zero tide and so they’re going aground especially at the entrances.”

Taking care of the town’s harbors is important. With most of the residents involved in commercial fishing, the harbors are one of the largest economic drivers for the borough.

To try and solve the problem the borough went to the U.S. Army Corps of Engineers to see if they could help with dredging. The federal government agency takes care of maintaining projects that it installs itself. That includes Petersburg’s North Harbor, which was built before statehood, and other areas of the water front but not the South Harbor, at least on the surface. By working with lobbyists in D.C., the borough has found that they do qualify for federal help through Section 107 of the 1960 River and Harbor Act. Basically, it allows the federal agency to study, plan, and construct small navigation projects that have not been authorized by Congress.

A project is approved for construction only after detailed study shows engineering feasibility, economic justification, and environmental acceptability. Petersburg’s heavy commercial traffic is just the economic situation that the feds support.

“Then they came back with this proposal that blew me away,” Wollen said. “I’m still on cloud nine, I cannot believe how decent, how super cool this proposal is that they’re offering us.”

The proposal offers paying for about half of the dredging and a feasibility study leading up to it. It also offers taking over part of the permanent maintenance of the South Harbor. While the borough would continue caring for the basin directly under the docks, the Corps would take over maintaining the floor of the main channels. The Corps would check in every 20 or 30 years for its upkeep.

“We become recognized as part of their family,” Wollen said. “Right now the South Harbor and Middle Harbor are not part of that family and you and I are on the hook to maintenance it.”

The borough assembly agreed that it sounded like a good deal. They approved $325,000 to be spent on the dredging study.

The vote came after Assembly Member, Bob Lynn, raised some questions. Primarily, regarding the fact that the borough could spend the money but the Army Corps of Engineers is not promised to do the work. They could back away.

Assembly member, Cindi Lagoudakis, said the dredging proposal is a direct result of a trip she took to D.C. along with a few others on assembly over a year ago.

“I’m really encouraged to see that we got some value for that effort cause sometimes it looks like maybe we’re just going back there and having casual conversation but this is going to be a real positive for Petersburg,” Lagoudakis said.

At first glance, the project estimates that about 50,000 cubic yards of dredge spoils would need to be removed and stored but an exact amount would be identified in the feasibility study.

The dredging is estimated to happen by 2019.