Commentary by Becky Knight – Thinking Outside the Box: A Better Solution for the Mental Health Lands Debacle

KFSK has an open airwaves policy. We encourage the public to express opinions, ideas and creative works. The views and opinions expressed are not necessarily those of KFSK. 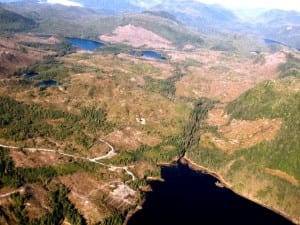 Recent logging – nearly 4,000 acres – at Leask Lakes, Revilla Island by the Alaska Mental Health Trust. S.3006 would give AMHT an additional 8,000 acres adjacent to this.” photo credit B. Knight

Thinking Outside the Box: A Better Solution for the Mental Health Lands Debacle

The Greater Southeast Alaska Conservation Community believes there are better solutions than a land exchange to solve the highly controversial Alaska Mental Health Trust debacle. The exchange is detailed in Senator Murkowski’s Alaska Mental Health Trust Land Exchange Act of 2016 (S.3006). [1] Specifically, what should be pursued instead is either a federal buy-out or a land transfer with the State, not Feds, from existing State forestlands. Clearly, AMHT’s threats that Murkowski’s bill be passed— or else—have angered many. Further, moving the impacts of large-scale, destructive logging out of the local public’s eye to Prince of Wales Island and elsewhere on Revilla Island only caves-in to the Trust’s threats and simply shifts the destruction to old growth forests already highly-fragmented by decades of logging.

The best alternative would be for the federal government to trade an ample monetary endowment to AMHT in exchange for the land holdings the Trust has been trying to unload. The endowment should be based on an appraisal of the profit that the Trust could be expected to net over two cutting cycles (i.e. the net value to the Trust of the present timber, plus something for the land).

Of the two alternatives suggested above, the endowment alternative would be best for the environment and would focus AMHT on its real work, instead of its current distracting extra role as an arm of the timber industry.

The endowment alternative is inspired by an item in another of Senator Murkowski’s bills [2], authorizing the federal government to purchase outright Shee Atika Corporation’s large, already-clearcut landholding at Cube Cove, on Admiralty Island. Clearly, the Senator’s confidence that the federal government can afford this approach demonstrates that a federal buy-out for AMHT in Southeast is doable. Certainly, it is a worthy goal since it would move the “Trust” out of the land management business and instead focus AMHT’s attention on its vital role of serving the mental health needs of Alaskans [3]. There would be no loss of valuable public lands and scenic resources, and no threat to life and limb from logging-triggered landslides. That threat is very real and must be avoided on slopes above Petersburg homes and on Ketchikan’s Deer Mountain.

The other alternative, a land transfer with Southeast State Forest lands has some justification, since the state was the original source of the problem in the 70’s and 80’s when it seized AMHT’s prior land holdings, forcing the Trust beneficiaries to court to have them restored with new ones. While a land exchange with the state would still result in logging by AMHT, DNR intends to log those lands in their entirety anyway. Although the public at least has minimal say on DNR’s logging, the endowment alternative is best.

Lastly, in addition to the AMHT exchange, Murkowski’s goal to move federal lands to other ownerships through privatization and transfer, includes the Landless Natives bill [4] with a 115,200 acre loss, and other legislation [5] which includes transfer of the heart of the Tongass to the State – with up to a 2.0 million acres loss. The Senator’s legislation is all about transfer of the American public’s old-growth forest and other resources in order to circumvent gold-standard federal laws like NEPA and NFMA, as well as kill the opportunity for public comment. If passed, it would further cripple an already severely frayed and inadequate Tongass conservation strategy and would fulfill Murkowski’s objective of placing logging under the weak Alaska Forest Resources & Practices Act, which for example allows clearcuts of unlimited size.

Please visit the KFSK website for a copy of this commentary and photo of recent Trust logging at Leask Lakes on Revilla Island near Ketchikan.