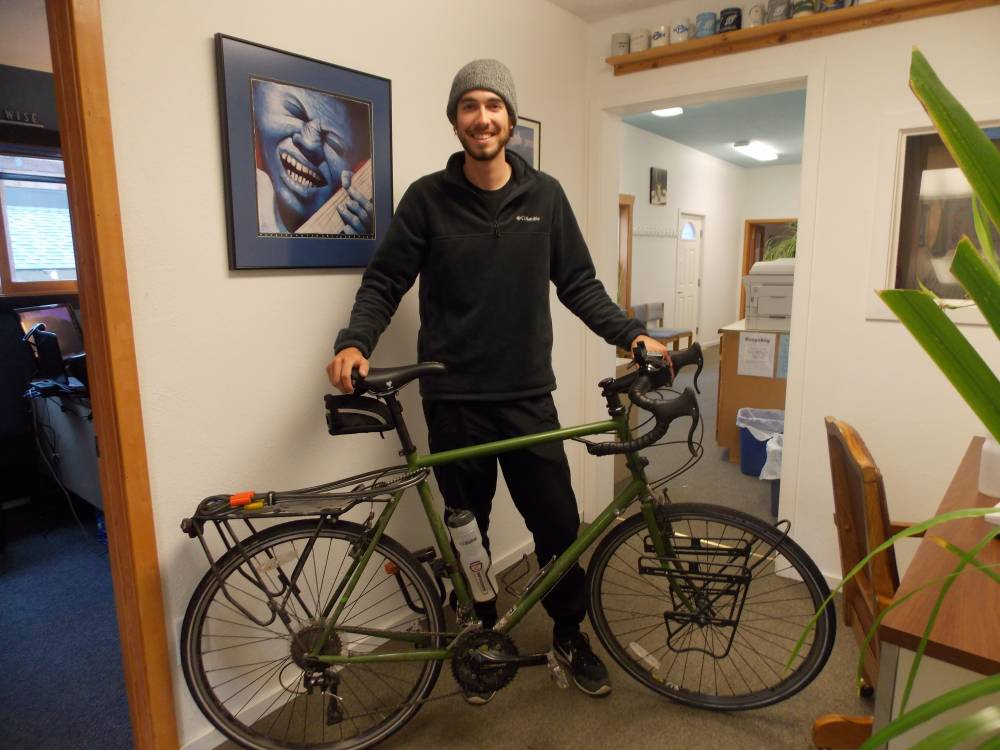 A 24-year-old bike rider has started a 10-month journey through 14 countries from Alaska to Argentina. He’s not even the first in his own family to make that trip. However, along the way, he’s hoping to raise money and awareness for spinal cord injuries. He’s heading way south on the Alaska Marine Highway, making stops in Southeast Alaska.
24-year-old Ian Andersen started his journey in Prudhoe Bay on August 24th. He says he was averaging around 70 miles a day on the gravel of the Dalton Highway, increased that to around 80-90 miles a day from Fairbanks to Haines and hopes to be riding more than 100 miles a day on the pavement of the lower 48.
His favorite stretch so far? Between Haines Junction and Haines, the highway that hosts the Kluane Chilkat International Bike Relay Race every year.

“It’s about 150 miles and just the most spectacular scenery I’ve seen so far,” said Andersen. “Really cool to see the snow-capped mountains with the trees turning colors with the gold, the orange and the red. And then you also had some of the greens. It was almost like three seasons meshed into one, just really really great, beautiful pavement.”

Another memorable experience came after pedaling into a strong headwind near Destruction Bay in the Yukon Territory about one week into the trip. “I had only made 65 miles that day but I was pedaling, exhausted, wasn’t feeling it, super frustrated,” he explained. “Alright that’s enough. Pulled over to the side of the road, set up my tent, went to bed, so frustrated. Turned out to be one of the best decisions I’ve made so far because in the morning I woke up to the sound of like shuffling feet and grunting like right outside my tent. I woke up that. It was like 6:30. So I go and unzip the zipper to the tent, I look out. There’s like 25 or 30, just this huge herd of wild Dall sheep, you know with the big horns that curl up and around.”

Andersen grew up in Minneapolis, Minnesota and graduated from the University of Southern California. He’s doing the ride with his best friend and USC classmate Natalie Fung in mind. On September 21, 2013 Fung was paralyzed in a car accident in Las Vegas. “She was in a taxi,” he said. “It was really late in the morning and she was hit by a drunk driver in a big truck and actually paralyzed from the chest down. So really sad, unpreventable situation she found herself in there. And I’m kinda doing the ride for her. It’s really, personally I’m invested in the cause and it’s really close to me. It’s been an awesome experience being able to talk about that and raise awareness for spinal cord injuries.”

Along the way, Anderson hopes to raise a dollar a mile for the United Spinal Association. He also looks forward to seeing Fung in Los Angeles while he passes through.

The 24-year-old didn’t train for the ride of over 17,000 miles and admits he was a little sore in the first few weeks of pedaling. He’s making the trip with some good intelligence though. His uncle Bret Andersen, rode along the same route in 1986. Andersen explained he’s already benefitted from his uncle’s advice.

“You know when you’re riding your knees, your feet and your hands just get so cold because those are the parts of your body that are pressed up against the fabric. So he said to wrap plastic bags around your feet to keep them warm, keep the wind off of them. And oh boy does that make a difference. I did that once in the Yukon when it was kind of like lightly raining and it just goes from ice cold feet to nice and toasty and warm. Great tip. That was a really good tip.”

After taking his bike on the ferry through Southeast Alaska, Anderson will head to Prince Rupert, and then to Vancouver Island before pedal down through Washington, Oregon and California. He also may rely on boat transportation across the Gulf of California and Andersen said a boat is also one option for crossing the Darien Gap between Panama and Columbia.

“My uncle when he was down at the gap, he and his team loaded up all his gear into these giant backpacking backpacks, put it on their back, deflated the pressure on their tires and then pushed their bikes through. It’s just like 100 miles of really dense jungles. There’s rivers you have to hop in little dugout canoes and the locals will push you across the rivers and down the little passageways through there. I mean that sounds like something I’d be up for. I guess I have to ask around and see what the situation is like today. But either go through or go around.”
Anderson plans to pedal through Ecuador, Peru and Chile before ending his journey in Ushuaia, Argentina in the spring of 2017.