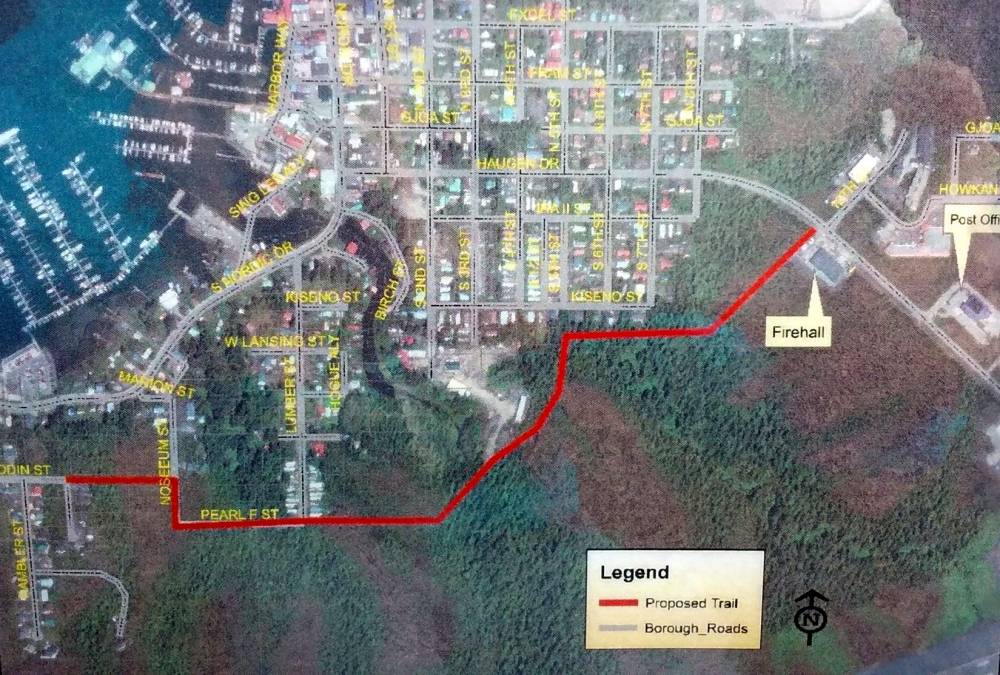 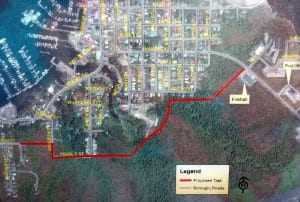 The red line represents the proposed trail from Severson Subdivision to Haugen Drive.


The proposed trail is just in the initial stages and would likely take years to complete.

According to the proposal, the trail would link the south part of town to the airport area without going through downtown Petersburg. The proposal says it would open up opportunities for the area residences of Severson Subdivision.

Barry Morrison is the Council President for Petersburg Indian Association.

“In Petersburg we have beautiful scenery, a ton of space that is unused at this point that people would love to take advantage of,” Morrison said, “and the trails are a perfect example.”

The proposed trail would be about a mile long running from Odin Street at Severson Subdivision on the south part of town to the existing bike trail by the Fire Hall. It would skirt by Lumber Street with an intersecting trail, continue across various muskeg and forested areas of the airport lands to end at the existing trail system along Haugen Drive.

The trail would be about six feet wide, made of crushed rock and have several foot bridges along the way.

The idea for the project was first introduced by a former director of the Borough’s Parks and Recreation Department. Now it’s on PIA’s Long Range Transportation Plan. The two entities would pool funding resources and PIA has an experienced trail crew to do the work.

For the time being, Morrison says, it’s still basically an idea on paper.

“We need the go ahead from the borough and the Planning and Zoning Commission, I believe, is where it goes to. We need an okay from them to get started on this project,” Morrison said. “Once that happens then it can go on to the design phase. And then it can go out for funding and be started.”

If the borough agrees to a partnership, PIA will commit funds to the preliminary engineering and design for 2017.

PIA is working with the borough to upgrade a few other trails in town, the Hungry Point trail and the City Creek trail. PIA employs eight people seasonally to work on trails.

The proposed Severson trail will be considered at the next Planning and Zoning Commission meeting on October 25 at 2:30 p.m.