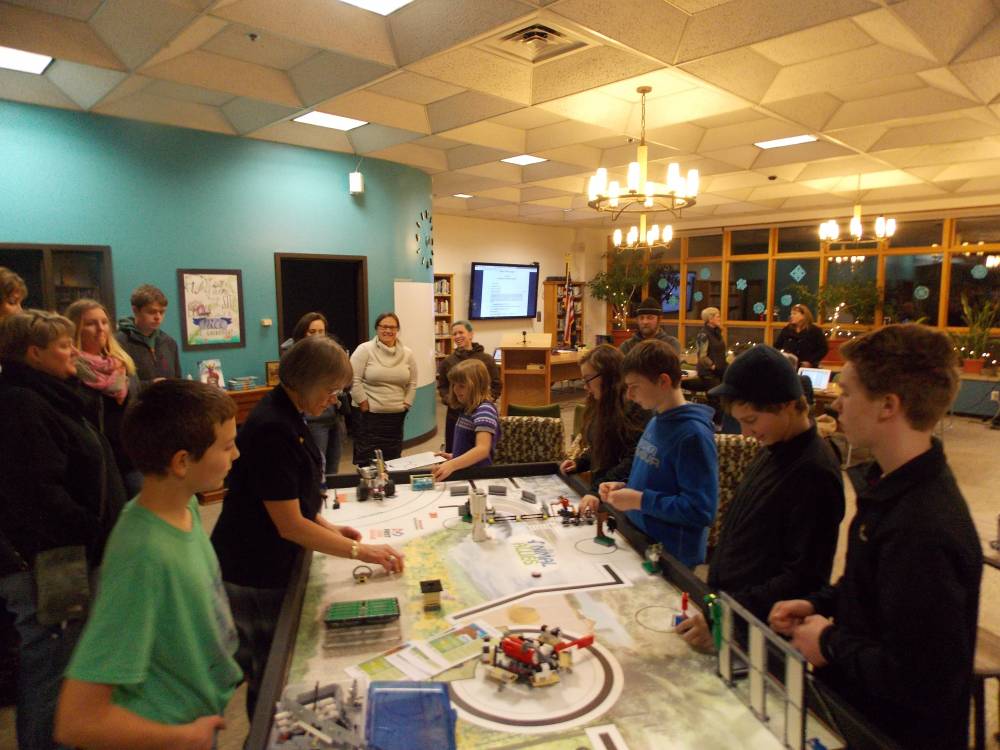 A new team of middle schoolers in Petersburg got a chance this fall to compete in robotics programming. The team demonstrated their programming skills to the Petersburg school board Tuesday night.
Eight grader Jaden Perry ran a robot through one of its missions and team coach and high school math teacher Joyce Metsa explained the action. Metsa explained that the students compete against other teams by programming robots through a series of tasks, or missions.

The team, called the Petersburg Vikings, had three eighth graders, one seventh grader and one sixth grader who made the trip to Juneau December 10th for the Juneau FIRST Lego League Jamboree. FIRST stands for For Inspiration and Recognition in Science and Technology. The team came in 17th of 26 teams.
The missions are farm chores, involving mechanized animals. Sometimes the programs are successful, other times the robots failed at their tasks as eight grader Liam Demko showed. 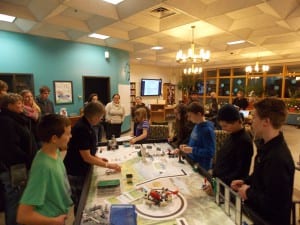 Metsa is new to the district this year and coached a robotics team at her last job in Metlakatla. She highlighted the importance of the program. “We really want to thank the school board for sponsoring the travel to Juneau,” she said. “There is so much learning that goes on here. I’ve been in this profession for many, many years and I gotta tell you. This is probably the best opportunity for kids to learn how to solve problems in an open-ended way.”

The robotics team was added to the district’s activities program this year and it fills a niche for an extra-curricular activity that doesn’t center around a sport. Metsa was not paid a coaching stipend and the students raised money to pay the entrance fee for the competition. Superintendent Erica Kludt Painter says that Metsa wrote a grant for the program and the equipment and the district only paid for the cost of travel, hotel and per diem for the trip. Principal Rick Dormer told the board he thought the team could be self-sustaining in future years because of grant money. While a competitive team at the middle school level is new this year, Dormer explained that robotics as a teaching tool is not.

“Ms Toland and Mr. Sullivan maybe they do some of this robotics in the elementary school,” Dormer said. “And Mr. Brock has taught a robotics class for years where they do they basics of that, maybe you’ve seen that other board presentation. Now we have this competitive team but you can see what they’re doing. There were many more kids involved there, some of the kids, there were almost twice that many, but just kinda coming and going they couldn’t quite do it all the way through the competition but were involved in that and then the high school has been doing some programming.”

In the high school MacTech students this year have been learning on a remote controlled baseball that rolls through the hallways and an electronic mouse that runs through a maze. Robotics has been an elective class in the middle school for a decade and students in that class also gave a presentation to the board last spring. And in the elementary school students started up a robotics club this year.