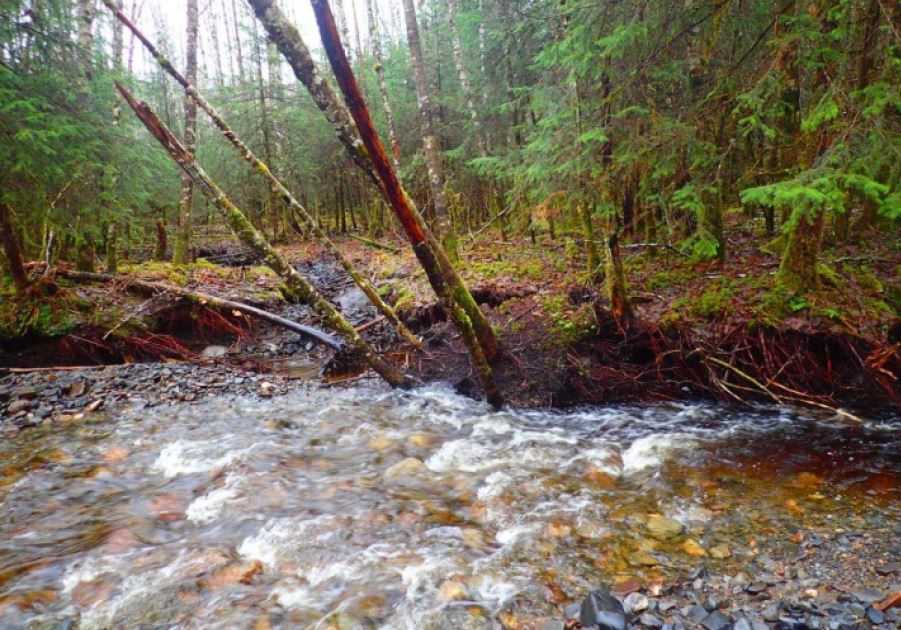 The U.S. Forest Service is moving forward with a project to restore a stream damaged by decades-old logging and road-building south of Petersburg. The work will likely mean logging some other trees on another part of the island and that’s generated some opposition.

Ohmer Creek crosses underneath Mitkof Highway about 21 miles south of Petersburg. During construction of the roadway in 1959 and 1960, trees were cut from about 20 acres around the stream. Crews also removed stumps and dug out sand and gravel from the floodplain of the creek to build the highway. That left part of Ohmer Creek a wider, shallower stream, where heavy rains erode stream banks and young salmon have no deep pools to grow and survive.

Forest Service hydrologist Heath Whitacre said restoration work is planned for Ohmer Creek and a tributary called Lumpy Creek. “What this project would do would basically be to work within those same areas, add wood to some of those old structures, create new structures, add some cover to the rearing ponds that wasn’t there. We want to re-establish the connection between one of the rearing ponds and Lumpy Creek that’s only connected at higher water flows.” 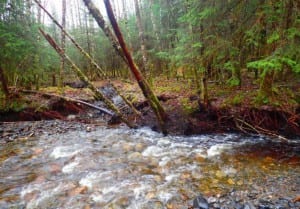 Photo of Ohmer Creek from USFS November 2016 Record of Decision

The streams have populations of three kinds of salmon and two kinds of trout. Adding wood to the stream can stabilize banks and help create deep pools where young salmon can survive a winter freeze or heavy rains in the fall. An environmental analysis for the project states the quality of the habitat in the two creeks is declining and will continue to worsen without restoration work. The practice of cutting trees on fish streams on National Forest land ended with the Tongass Timber Reform Act of 1990, which required stream buffers.

The Forest Service already did some work on that creek a decade and a half ago, digging out some pools for fish rearing ponds and placing some wood. Whitacre said that work has made a difference, but more is needed. The agency proposes building 15 large wood structures using trees with rootwads still attached. To build those wood structures, the project will use 110 old-growth trees from national forest land at Woodpecker Cove, about 12 miles from Ohmer Creek.

“It’s obtuse logic that valuable Woodpecker deer habitat should be liquidated and the old-growth timber that supports that habitat be used to restore Ohmer Cree,” said Becky Knight, a board member of the Greater Southeast Alaska Conservation Community, which has raised concerns with the project. “As most people are aware, there’s been significant public concern regarding the incremental loss of local deer habitat, but no prior or specific public concern about the need to restore Ohmer Creek.” Knight noted she doesn’t mean to say Ohmer Creek isn’t degraded, but thinks the agency would be better off fixing hanging and blocked road culverts that impede fish passage.

In comments on the project, the state’s Department of Natural Resources recommends taking wood left in areas that have already been logged before cutting trees in Woodpecker. The Department of Environmental Conservation fully supports the work.
The source of the trees isn’t set. The agency has agreed to consider other options for that wood. Whitacre said any stream restoration project will require using some wood from somewhere else in the forest. “We’ve collected wood from old-growth stands, young-growth stands,” he said. “We’ve used logs from decommissioned bridges. We’ve used wood from riparian areas. We’ve used blowdown patches. We’ve taken it from highway expansions. We’ve taken it from road building. Basically wherever we choose to take the wood there’s usually somebody who thinks we should have chosen somewhere else.”

Whitacre noted the old-growth trees would be cut next to an area that’s already been logged. He said a wildlife specialist looked at the proposal and acknowledged there would be an impact, but it wouldn’t be significant.

So, does it make sense to use deer habitat to fix salmon habitat? Whitacre thinks so. “If you look at the analysis and you look at where we’re getting the wood, versus the benefits of what we’re doing, we’re basically taking two acres out of production, old-growth POG (Productive Old Growth) they call it, but we are benefitting about a half-mile of salmon stream on a large salmon stream and a portion of the 20-acre flood plain. And so, I thought it was worthwhile, the decision-maker also thought it was worthwhile.”

The decision-maker in this case is District Ranger David Zimmerman. He signed off on an environmental assessment for the stream work in late November.
The project probably won’t start for a couple years. The agency hopes to do the work at the same time a timber sale happens in the area. But the project is designed to happen with or without a separate timber harvest. The agency will contract the work out and it’s expected to cost around 150,000 dollars. Old logging equipment, 55-gallon drums and cables would also be removed from the area.