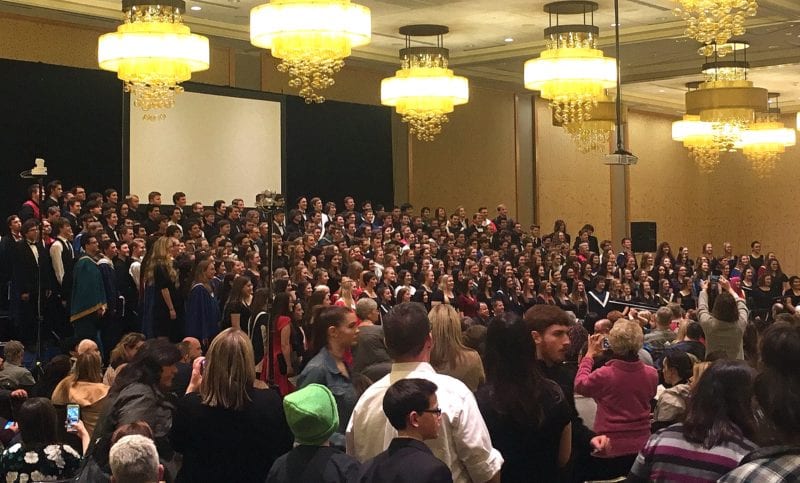 What would it be like to sing with about 350 other people…and do it well? Three Petersburg High School students were able to do just that at the recent music conference known as All Northwest. It brings together honors students from Alaska, Washington, Oregon, Idaho, Montana and Wyoming. KFSK’s Angela Denning reports:

Having 340 high school students singing together may seem crazy but Petersburg music teacher, Matt Lenhard puts it in perspective.

“These are the best of these six states and at the same time you have a director who realizes he has 20 hours of rehearsal with a concert right at the end of it,” Lenhard said. “So, it’s that good match of a very powerful conductor and very driven kids and music that they want to perform well.”

“When I saw that he was going to be the director of this choir I was thrilled and did a little dance,” Lenhard said, “that they would have a chance to work with someone of his caliber. It’s huge.”

The choir practiced in a big church and later sang at a rehearsal in a performance space. 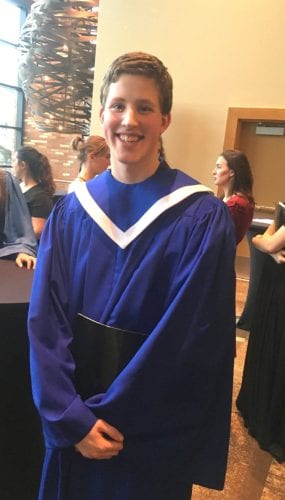 Ben Higgins, a Petersburg Senior who sings Tenor I, was accepted into the All Northwest. Photo courtesy of Matt Lenhard.

Ben Higgins, a Petersburg Senior who sings Tenor I says the acoustics weren’t as good in the church but it was the right place to practice. It produced more of what’s called a “dry sound” where the music is absorbed by the walls.

“If we had practiced in a space with really good acoustics we could’ve been listening to ourselves and not have heard what we needed to fix,” Higgins said.

“He was very, very precise with how we pronounced our words,” Sperl said. “When you have 340 kids saying just like a simple word like, I don’t know, “live” or something you have to be very careful how you say it because if you all like end, the end just a tiny little bit then there’s a bunch of like echoes of the word ending so he’d run us over and over on certain words especially on words that began with like “K”. He made sure that we could hear that we are starting with a “kuh” sound.”

“So, were there any exercises for that?” I asked her.

“Yeah, he’d have us mark up our music and then we’d run through and if there was like some of the sections or something that didn’t say it correctly, he’d stop us and he’d make us do it over and over,” Sperl said. “Sometimes he did that six or seven times. Just over and over, just a certain few measures.” 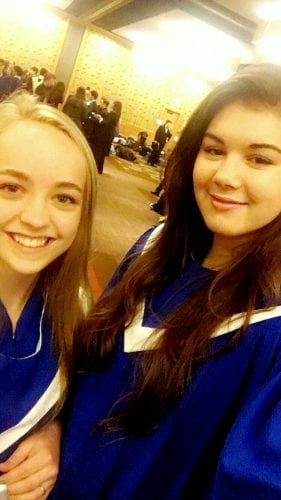 All three of Petersburg’s students had been to the All State Music Festival, performing with the best singers from around Alaska. But this was a different level says Sophomore Eva Lenhard, who sings Alto II. She says the directors were not the same.

“At All State it was more of like a enjoy the music and get the emotions to sing the music,” Eva Lenhard said. “But at All Northwest, it was very like this needs to be perfect, like the technical, the pronunciation. We only sang the songs, completely through without stopping a couple of times before the performance,” Eva Lenhard said. “He always stopped us and made sure we were doing everything perfect.”

The All Northwest music conference is put on by the National Association for Music Education.

The event is held every two years. The students must audition for the festival through recordings. Southeast Alaska had six students accepted. They included three choir students from Haines: Alexandria Habra, Dylan Palmieri, and Rachel Haas. Ella Lubin of Sitka made the All Northwest band.