The Petersburg borough is in court this year defending the search of a home slated for demolition in 2014. Borough officials visited the vacant home on Wrangell Avenue looking for asbestos tile in case the municipality ended up taking down the structure. The homeowners are arguing that was an unlawful search of their property. The lawsuit could go to trial this May unless a judge dismisses the case before that.

The vacated home at 1011 Wrangell Avenue is no longer there. Owners Karen Ellingstad and husband Fred Triem had the aging structure taken down in 2014 after the borough assembly in December of 2013 declared the structure a dangerous building and ordered it fixed up or removed. The foundation of the home had failed in 2009, leaving it resting on toppled pilings. 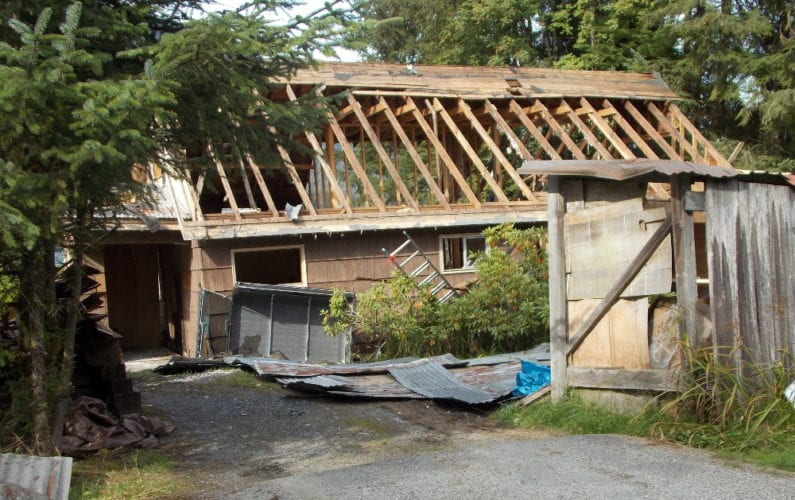 Home owners Fred Triem and Karen Ellingstad started taking down the building at 1011 Wrangell Avenue during the summer of 2014.

In January of 2014, the borough’s building official at the time Leo Luczak and public works director Karl Hagerman went to the home to take photos and look for any signs of asbestos in the floor tile. During oral arguments in the case in late February, borough attorney Jim Brennan argued that search was legal and did not require a warrant. He brought up three points in asking superior court judge William Carey to rule against the plaintiffs before the suit goes to trial.

“The warrantless search here in the context of this case was not unreasonable,” Brennan told the judge. “Secondly the plaintiff has shown no damages from alleged constitutional violation and thirdly there is at this juncture no basis for injunctive relief.”

The borough officials took a sample of floor tile to test for asbestos, in case the borough took on the demolition of the structure. Brennan argued the sole purpose of the search was to protect workers taking dwon the home. And he argued that the homeowners have not identified what damages they suffered.

“What has the owner lost here?” Brennan asked. “A broken piece of tile? That’s what was taken from there and that was for the purposes of determining something which was again, for the owners benefit, that we got an issue here that’s gonna need to be addressed by somebody before this building’s demolished and putting them on notice if you don’t do it yourselves the borough’s going to seek reimbursement of 9000-10,000 dollars cost.”

Brennan also noted that the home was not occupied since at least 2009 and was scheduled for demolition after a long process.

The lawsuit characterizes the visit by the borough officials as am illegal search, without a search warrant or the homeowners’ knowledge or consent. Ellingstad argued the visit violated the fourth amendment of the U.S. Constitution which aims to limit unreasonable searches and seizures by government on someone’s property or person. Ellingstad disputed that they were afforded full due process in the borough’s decision that the building was a dangerous one. In fact the home owners argue the structure was not a danger to anyone. That disagreement has already been argued in a separate case. Triem and Ellingstad appealed the borough assembly’s 2013 ruling on the home and lost in superior court but have appealed that decision to the state supreme court which has yet to rule on the case.

This case focuses solely on the search of the property. Judge Carey questioned Ellingstad about an expectation of privacy on the private property.

“What’s your expectation of privacy in a place you don’t live in that you have essentially abandoned that is falling off its foundation that is open and at least in some sense, I think it’s not disputed there was an open window and there was just this piece of plywood blocking one of the entrances?” Carey wondered.

Ellingstad responded that just because she wasn’t living there does not make the search legal. “I’ll give an example of a warehouse,” Ellingstad said. “Don’t live in a warehouse but the owners certainly would have an expectation of privacy I would believe, a garage, a cabin.”

She also questioned why the borough was in a rush to demolish the building. “The borough’s motion papers kind of want us to think that the dangerous building condition created an exception to the warrant requirement. Well it wasn’t an imminent hazard. Nothing was gonna happen. Nothing did happen ‘til we finally tore it down ourselves.”

In response, Brennan said the homeowners had been dragging their feet throughout the whole process of determining a dangerous building. Brennan is asking the judge to rule against the home owners before the case goes to trial on May 3rd. Carey said he expected a ruling on that motion soon.

The two sides have been in court before over another building in Petersburg, that one on the corner of First and Fram streets. That structure built in 1902, also had a foundation problem. It was ultimately repaired and moved off the curb of First Street.