The Vikings beat Metlakatla 46-26 Saturday night to secure the 2A championship. Petersburg trailed in that game after the first quarter 12-6 and had a slim lead at half time 21-17 before pulling away in the second half. 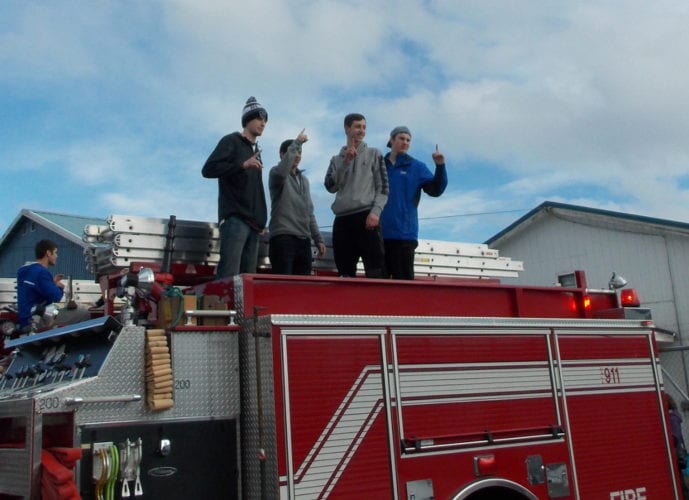 From left, Wolf Brooks, Dale Strong, Blaine Volk and Gunnar Payne get ride for a ride through town on a fire truck Sunday.

Viking senior Stewart Conn said it was defense that won the game. “They went scoreless for 11 minutes in the second half, the whole third quarter and couple minutes into the fourth and that’s what gave us the W.”

Petersburg switched up its defense for that final game and focused on containing Metlakatla’s top scorer.

“(We) Stopped Danny Marsden explained Petersburg senior Blaine Volk explains. “He was by far their best scorer. So we threw that on him. Had Mark Neidiffer guard him and Dale Strong and they completely shut him down and we kept them out of the key.”

Joe Viechnicki spoke with Brock about the state title.

The Vikings beat Tikigaq 62-39 in the opening round of the tournament Thursday and beat Unalakleet 65-57 in the semi-finals Friday night.