LeConte Glacier near Petersburg has been the focus of a lot of research lately. It’s the southern-most tide water glacier in the northern hemisphere and scientists have been studying it to give them a better idea of glacial retreat and sea level rise around the world. There is a lot more planned for this May. But to get close to the glacier, which is constantly calving, a team of scientists is relying on unmanned, remote controlled kayaks. KFSK’s Angela Denning reports: 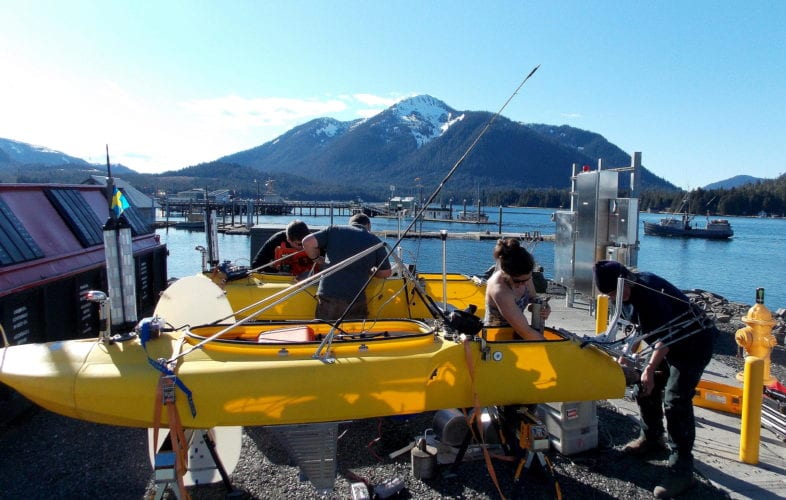 On the flat gravel surface of Petersburg’s drive down dock, two bright yellow plastic kayaks are propped up on makeshift tables. These kayaks don’t look like ones you see around here. They’re shorter and wider and they have a bunch of equipment attached to them. They also have a sciencey name, “Robotic Oceanographic Surface Sampler” or ROSS for short.

Leaning into one of the cockpits is June Marion. She’s a petite brunette with her hair in a bun and the principal engineer for the project.

“This is a little joy stick, it’s designed to be driven around by recreational fishermen,” Marion said.

But these kayaks have been completely tweaked by Marion and an ocean robotics team from Oregon State University. Five of those scientists are working here today. They control the kayaks by laptop computer up to a few miles away. The boats are customized with a keel, antennas, lights, and boxes of computer chips and wires.

“We can control it with a radio controller or with way point navigation so just clicking on points on a map and it will go there,” Marion said, “which is pretty cool.”

You can even start the engine by a computer, which programmer, Jasmine Nahorniak does from a table on the other side of the dock.

The motor sounded to me like a lawnmower, I tell her.

“Yeah, it’s a little one-cylinder Subaru Robin engine,” Marion said. “It’s about seven horse power and we go with all of our instrumentation inside the kayak about three or four knots through the water. If they’re not loaded down they can go about 20 knots, I think.” 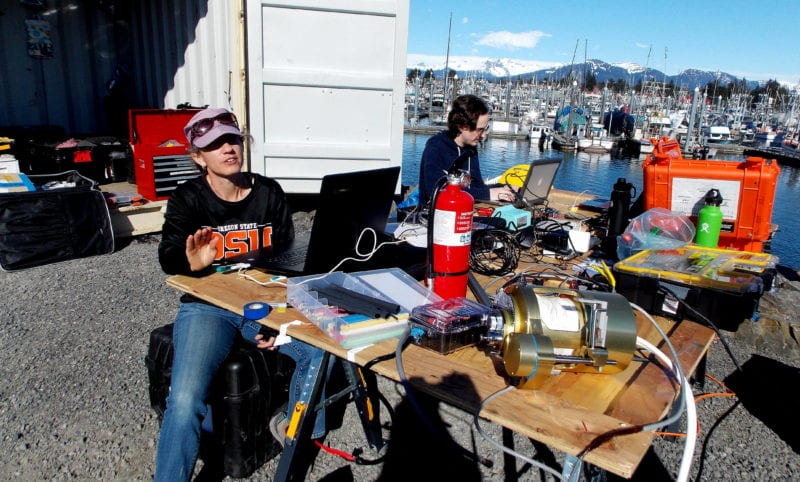 Computer programmer, Jasmine Nahorniak, explains that she and Dylan Winters are working on laptops set up to control the kayaks. Photo/Angela Denning

But these kayaks are packed with high tech equipment. Fully loaded they weigh between three and four hundred pounds.

“All of the electronics, all the batteries, this is an electronic fishing reel that we use as a profiling winch,” Marion said.

The profiling winch drops an instrument down into the water using a line running out from a metal A-frame over the top of the kayak.

“And then we can let a couple hundred meters of line go down and the instrument will profile the whole way down,” Marion said. “We’re taking measurements six times a second, I think.”

They are looking at things like salinity, temperature and depth. That’s all in the back of the kayak. In the middle, other equipment measures water velocity.

“So, we use all of that information together to try to understand how the ocean contributes to melting from below in addition to atmospheric conditions melting glaciers from above,” Marion said.

The robotics team has been spending the last four days here at the dock to get the kayaks sea worthy. A whole other team of ocean scientists postponed their trip to Petersburg until May because there was too much ice in LeConte Bay. It’s part of a multi-year project to study how fast the glacier is retreating, specifically looking at the cold sub-glacial discharge sucking in the warmer water from the deep ocean.

Over at the other kayak two robotics science students are working on the navigation. They’re intensely looking into an orange, plastic box full of computer chips and wires.

Nick McComb says they call it their electronics box. 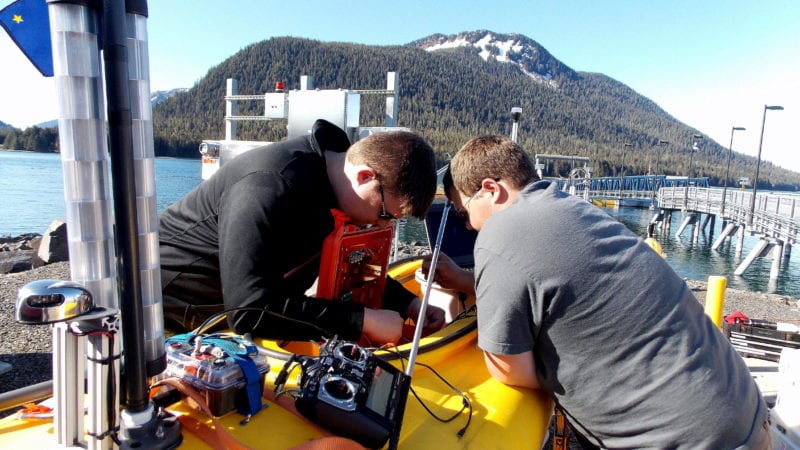 “Basically, everything is fed into here. It’s got a whole computer, a bunch of different electronics,” McComb said. “For the autonomy part of it we took the same chip that goes in a drone. There’s a whole bunch of custom stuff we did to it but it allows it to just drive these boats around completely by themselves.”

Right now the kayaks are programmed to do what the scientists say. That’s all that’s required for the Leconte project this spring. But there’s always a new technological challenge around the corner. For McComb, that means getting the kayaks to make decisions.

“For instance,” Marion added, “there’s an iceberg up ahead…don’t smash into it. Turn left or turn right or something like that.”

“Or find interesting facets in the water that we want to study and find more information but completely by themselves,” McComb said. “Just like real time analysis of the data and the things that are interesting and swarm towards them.”

Swarm towards them. That’s the future.

But for now, the safety net that the kayaks provide is what’s important. Glaciers are calving all the time. And right near the surface…that’s where the data is that scientists need.

“It’s really scary up there, so we send these guys out,” Marion said, pointing to the kayaks. “And if a big calving event were to happen and an ice berg fell on our kayak, you know, we would hope that we could get it back to get the data back. But all in all we lose our instruments and no life. No human life.”

The LeConte Research is funded by the National Science Foundation and the Office of Naval Research.