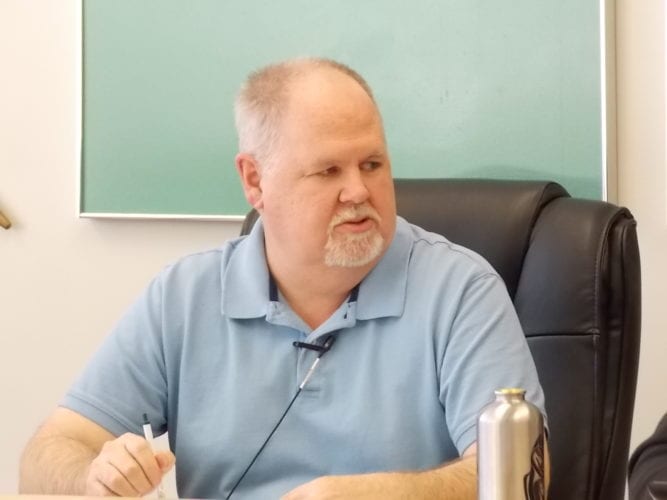 Petersburg’s borough assembly Monday pulled the plug on a planned re-organization of department heads. The plan was to move the borough’s public works director into a new position overseeing the electrical department in response to the upcoming retirement of the electrical superintendent. But that proposal ran into resistance from staff and the assembly. Instead the borough may look to recruit a new electrical superintendent.

Borough manager Steve Giesbrecht proposed the re-organization with the June 30th retirement of Petersburg Municipal Power and Light superintendent Joe Nelson after 14 years on the job. Giesbrecht wanted to move public works director Karl Hagerman into a new utility director’s job, overseeing the electric utility, along with the water and sewer departments. Hagerman’s assistant, Chris Cotta would have been promoted to public works director, overseeing the motor pool, garbage and street work.

Petersburg Municipal Power and Light electrician Gary Morgan opposed the idea and wanted an electrical engineer to head up the department. He brought up the issue of safety among other concerns. “The steps and procedures we follow during maintenance and outage events come directly from the superintendent,” Morgan said. “How would a director of utilities with no background in the electrical industry oversee the safety of those under him? How would an untrained person protect and direct lineman from invisible energy that he knows nothing about? What if the unthinkable happens and one us were killed in the line of duty?”

Another person testifying, Icicle Seafoods head electrician Nathan Midkiff also didn’t like the re-organization. “I would ask the council to seriously consider replacing Joe with another qualified power and light superintendent,” Midkiff said. “I think this will prove to be the most cost effective option in the long run.”

The issue was only a discussion item on the meeting agenda after manager Giesbrecht sent out letters outlining his proposal. Giesbrecht thought the changes would save the borough an estimated $108,000. “The issue we’re facing is financial in some ways,” Giesbrecht said. “And the only way we’re going to make headway against that is by taking advantage of opportunities that come up, short of closing whole departments down which I don’t think anyone wants.” Giesbrecht expressed confidence that Hagerman could oversee the electric department and did not think the borough could afford hiring an electrical engineer. He asked the assembly for some direction on filling the position in the future.

For his part Hagerman also though he could do the job. “I am confident that I could do this job but I don’t wanna do a job that I don’t have the support of the governing body,” Hagerman said. “So if that’s the way this is going I’ll step back. I’ve got a really good job right now.”

Outgoing electric superintendent Nelson thought the safety issue was an important one. He explained Petersburg’s electric department, unlike other small communities, often did repairs or upgrades with the electricity still on and did less contracting out of work. “There are a lot of things that we do and we do it hot because we don’t wanna put you out of power and put you out for significant amounts of time,” Nelson said. “So it’s a different attitude. We here in Petersburg, we’ve taken the attitude that we wanna keep the work here. We want these high paying jobs here in Petersburg. We don’t want the money going to Juneau to Chatham Electric, we want it here. And we can do the work better and we can do it quicker than what Chatham can do.”

Assembly members were not supportive of the re-organization plan. Some wanted to have an executive session and discuss the job descriptions and options for hiring behind closed doors. Others though the vacant position should be advertised.

“I would be in favor of moving this forward and putting it out to bid like you say because I think it’s only right that we put this up and see if there’s any other qualified people available before we just do inter-departmental stuff,” said Kurt Wohlhueter.

The assembly didn’t take a vote on the topic but agreed to have Giesbrecht and Nelson to come back to them with a job description in hopes of seeking a new power and light superintendent with an electrical background.