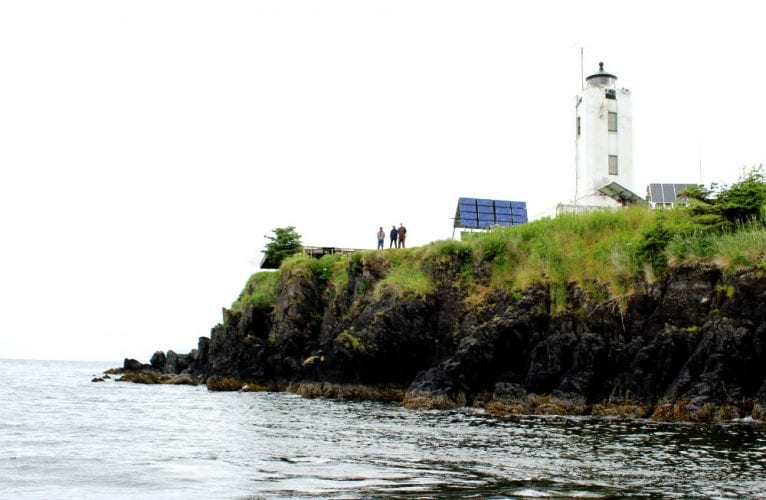 For the last twenty years, the non-profit Juneau Lighthouse Association has worked hard to preserve one of Alaska’s first lighthouses, Five Finger Light. With a tighter budget and cutbacks this year, the organization needed a special kind of family to look after this remote landmark. And they found them.

KFSK reporter Nora Saks visited the lighthouse in mid-June and got to spend some time exploring with the new lighthouse keepers.

That’s John Gans on the radio – checking in from his post at the lighthouse.

He’s helping the captain of The Pelican land safely on the island after a choppy two hour ride over from Petersburg. The boat has precious cargo – a month’s worth of groceries, and a close family friend.

“It was calmer when you called, and then it got windier and now it’s come down some. It’s weather, what can I tell you,” said Gans.

Luckily for The Pelican, he’s a pro. Really. A former ship’s pilot, he has years of practice guiding huge vessels into crowded ports.

The boat idles up to a jumble of slippery rocks and a skinny ladder and everyone jumps ashore, clutching boxes of Diet Coke, new brooms, suitcases, anything within reach. The supplies and visitors are a welcome delivery for John and his family, who have been there since mid-may.

“We’re just volunteers, the three of us – my wife Pat, Ismael, and myself,” Gans said.

While lots of lighthouses are isolated – this one is truly remote, even by Alaskan standards. To get a sense of just what that means, Pat Gans leads us up several stories of spiral stairs to the top of the art deco light tower. 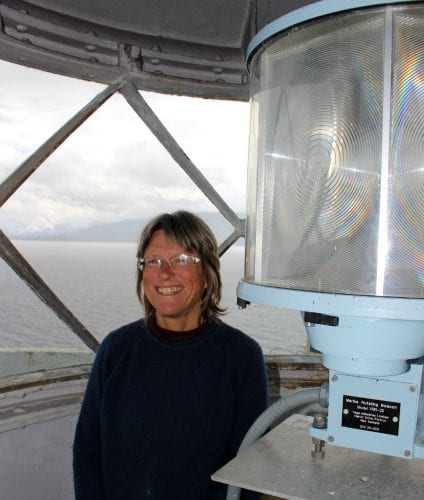 The beacon, now solar powered, gently hums and spins inside the cupola as she explains how the spot got its name.

“It’s called Five Finger Islands because the sailors said that from the water, a hand with five fingers would reach up and grab the ships and pull them under. So it has this history of being a treacherous area,” said Gans.

This section of the Inside Passage became a graveyard of maritime disasters for those chasing their fortune in gold and fish in the late 1890s. A navigational aid in Frederick Sound was badly needed.

“These are the four fingers, these little islands that we see dotting off to the north, and we are the thumb,” said Gans. “So we are the only island that is really high enough and accessible enough to put a lighthouse on.”

Accessible is a subjective term. This tiny island is 65 miles from Juneau and 40 miles north of Petersburg. And they don’t have a boat. Spending five months straight here would be an intimidating gig for a lot of folks.

But Gans and her family seem right at home here on this shaggy outcropping. It’s more space than they’re used to.

“It’s not hard for us because we actually still live part of our year on a sailboat down in the South Pacific,” said Gans. “So we’re used to being completely self-sufficient, where there’s nobody to come rescue us.”

With her husband’s background in the maritime industry, and hers as a medical doctor, they know how to stay safe while living on nature’s edge.

That kind of do-it-yourself attitude is crucial this season. The Juneau Lighthouse Association, the non-profit that owns and preserves the historic landmark, is not running its own resupply vessel due to financial constraints.

They keepers have had challenges getting restocked, but Gans doesn’t dwell. She says the generosity of passing tour operators, helpers in town, and the Coast Guard has been heart warming.

“Everybody checks in with us on the radio, they come by just to say hi, they ask if we need supplies, people have brought out groceries for us. We really are living in great style out here,” Gans said.

And, they know how to stay busy. Keeping up an 82 year old lighthouse ends up being a lot of work if you let it. 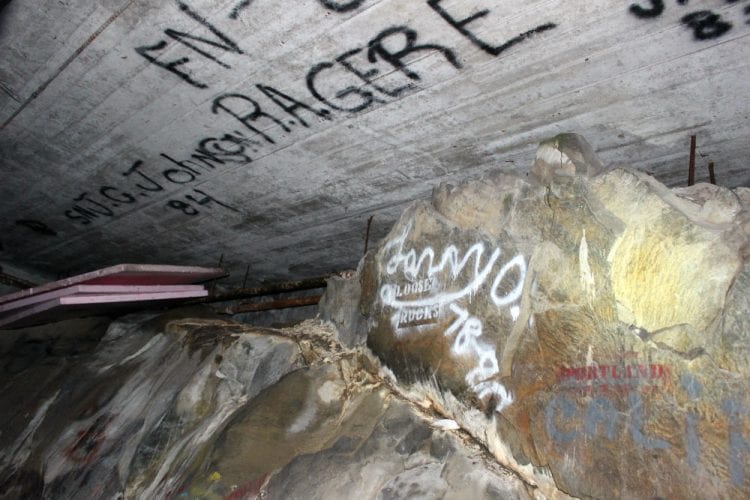 Inside the cement lighthouse station, rebuilt after the original wood structure burned down in the 1930s, it’s cozy and clean. John Gans says the fresh walls and refinished bathroom are just routine maintenance – but they look suspiciously like improvements.

“We do chipping and painting and picking up old and rusty things and organizing them. And trying to make the lighthouse look the best we can make it look with what we have to work with,” he said.

Their son, 18 year-old Ismael Castillejos Velasquez, is an important member of their team. Velasquez is deaf, and originally from a rural village in Mexico.

The couple met him on a sailing trip down south, and he’s been living with them on and off for the last three years. One of his jobs is to take daily measurements of their rain-fed water tanks to make sure they don’t run out, part of his homeschooling on the island.

Velasquez is fluent in sign language now, and plans to go to college. Pat Gans says that after growing up with virtually no language, he’s gradually learning to hear.

And when it’s time to take a break from their Sisyphean tasks, there is a remarkable amount to wonder at.

The keepers explores the island and its miniature rainforest as a living classroom – identifying all the edible berries, checking in on the bald eagle nest, and, hanging out with whales of course.

Hundreds of humpbacks visit here each summer, and for decades, the lighthouse has been a major platform for whale research.

“This is my favorite place to be with the whales,” said Pat Gans.

Her preferred perch is the ugliest spot on the island – an old rusty crane dock made of broken concrete – very close to the water.

“I can sit right here,” said Gans. “I can lean back against this and it’s deep right there. So the whales come like right there. It drops off and they come right there.”

It was a whale researcher who was here two years ago that mentioned this opportunity to the Gans family. She thought they might need Five Finger, and that it definitely needed them.

They plan on staying into October. Long enough to really see the light change, and long enough to welcome more visitors to this far-off place. 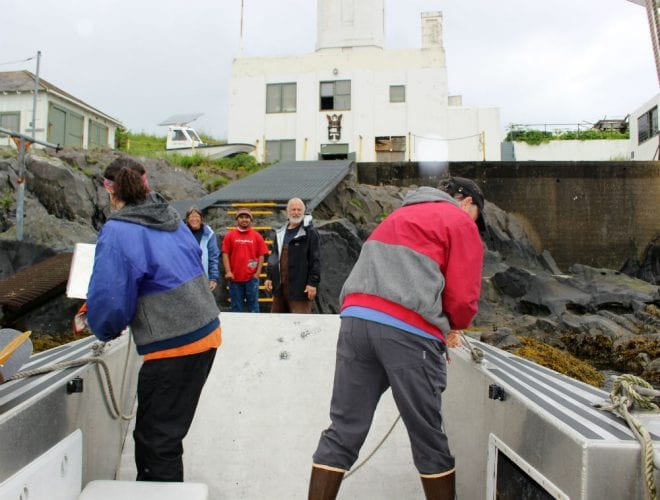 Pat and John Gans (l and r), with their son Ismael Velasquez (c), send off The Pelican. Photo – Nora Saks.