Volunteers start discussion on being homeless in Petersburg 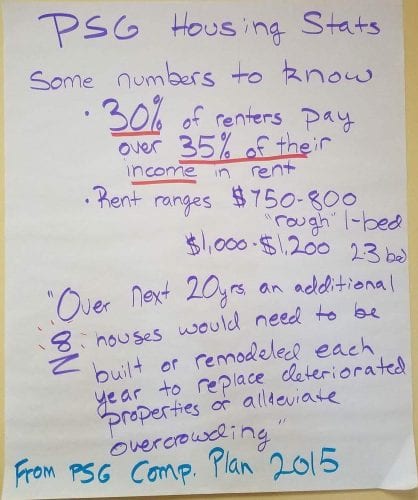 More than two dozen people attended the start up of a discussion this month on being homeless in Petersburg. Attendees agreed the problem was not a new one for the town but it is impacting more younger people. They’re starting to look for both short and long term solutions for shelter and meals.

The gathering included representatives from local non-profits and churches along with concerned citizens hoping to find some solutions. Annette Wooten, director of WAVE, or Working Against Violence for Everyone, helped moderate the discussion. She said she’s seeing homelessness as more of an issue with the people who come to WAVE.

“Right now the biggest issue is people are staying in unhealthy, unsafe relationships because there’s no housing and they don’t wanna be living on the streets,” Wooten said. “And then there’s also people living on the streets who are in a horrible situation and need resources but there’s just none here.”

Petersburg’s magistrate judge Desi Burrell said she has seen a huge increase in homelessness for people in court, “with what’s coming through with my case loads and the amount of couch surfing that’s going on and those that are trying to get clean and sober and not having a place for those folks to reach out and find a sober living environment,” Burrell said. “So I’m hoping with a couple people that have been involved with that this is exciting for Petersburg to have both of you here to maybe offer some great ideas for us.”

Another participant, Icicle Seafoods safety manager and volunteer EMT Rexanne Stafford thought Petersburg has had a homeless population for decades. “At least 20 years ago the Salvation Army used to house people up above the Salvation Army and there would be 40 homeless people at a time so it is not a problem that is new,” Stafford said. “I think we see it more now because it’s lot of young people, more young people than just families coming in.”

The best guess among the group was that there might be around 20-40 people in Petersburg who are homeless. WAVE’s Wooten agreed that the demographics of that population have changed. “I think you drug use has definitely impacted the homeless population and that families are not opening their homes up to someone who is actively using and that’s understandable,” she said. “Normally they’d just couch surf and just kinda roam around and that was our homeless population, to my knowledge, prior to any of this going on. Now there’s people who are living outside. And some of ‘em have tents. Some of ‘em are getting into cars. Whatever’s available.”

Jeanette Ness, a social worker at the Petersburg Indian Association, said in the last year she’s seeing more homeless people both Alaska Native and non-Native in the community. And she noted that there are families struggling to stay under a roof. “I’m getting really concerned now because I’m seeing families who are hardly making it, barely making it,” Ness said. “And I can say right now I have three families who at any given moment if they had something break down or whatever they’re out of their homes.”

Others who attended said they had been unaware that there are people in Petersburg with no place to stay but said they were willing to help find solutions. The group also heard from people who had experience working with the homeless elsewhere. Hannah Logan said she worked with youth in Portland for eight years and recommended having a warming shelter. “It was just a building for people to keep warm and sleep and it was usually staffed by volunteers but you know if we found some sort of a building where people could just go in and stay warm and sleep potentially in the winter months we could save lives, even if there isn’t plumbing but somewhere to start,” Logan said.

An out-of-town visitor, Dr. Tom Nighswander was on the first homeless commission in Anchorage in 1978 and said he’s still actively involved in the issue in Alaska’s largest city. “The thing that seems to be working has been permanent housing with management on-site,” Nighswander told the group. “And in fact there is now and that’s where the federal funding has gone to. But they are working for numbers, they’re looking for outcomes. But it doesn’t happen until you get a group like this together in communities. I’m very impressed how many people are here and how many agencies are represented. You’re doing the right things.”

Nighswander explained the homeless population is a mix of people, whether its families struggling to make ends meet, or singles, some who are struggling with addiction or mental health problems or both. He thought no one solution would work for everyone.

Discussion moderator Chelsea Tremblay used the example of Seattle, where she had lived for a year. “Basically we’re at this point where we have so few immediate resources but we also have so few long-term resources that it just gives us the opportunity to jump, if we have a small core group that focuses on the immediate stuff and then we’re also able to think about, because basically the answer that Seattle’s coming to is housing first as the method for actually solving the issue. And that’s not just a roof over their head that’s getting someone set up in a semi-permanent apartment of their own because that helps them basically stabilize something of their lives.”

The group came up with a list of needs like emergency short term shelter and food along with a long term fix for more low cost or subsidized rental housing. Other needs were life skills training and businesses that are willing to hire people with a criminal record. The group highlighted the multiple free weekly meals that have been started up by local churches and individuals and encouraged people to donate money, work or food to those efforts.

The next meeting on homelessness is Wednesday, July 19 at 6:30 p.m. in the community room at the Petersburg Public Library. Everyone is welcome.