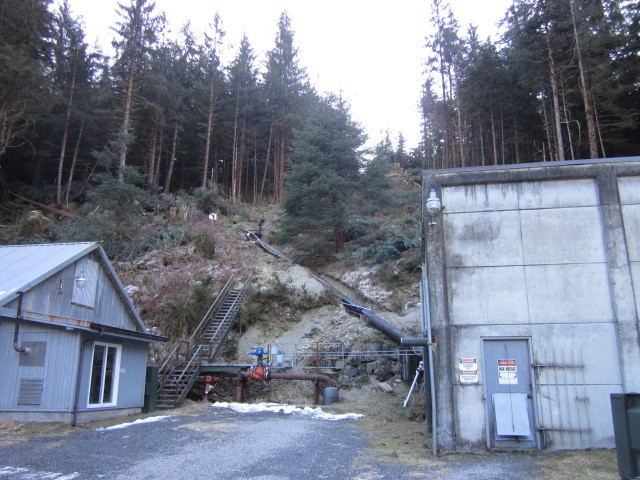 A contractor has been clearing trees along the penstock at Petersburg’s Crystal Lake hydro-electric plant about 18 miles south of downtown Petersburg. (Joe Viechnicki/KFSK)

The list of capital project needs in Petersburg’s electric utility is estimated to total eight and a half million dollars but that work can be spread out in the upcoming years and paid for with department reserves. That was the report Monday from Petersburg’s public works director. Some of the improvements are ongoing, some are starting this year and others will have to be scheduled to minimize the impact of power outages.

Public works director Karl Hagerman was tasked with coming up with a long-term capital improvement plan for Petersburg Municipal Power and Light. The borough-owned electrical utility has been building up its cash reserves through electrical sales; earlier this year those reserves were estimated to be around $7.5 million dollars.

Hagerman outlined a preliminary list of projects that could be accomplished over the next few years with some of that reserve money. “After the list is finalized then we will try to put numbers to those projects as far as what their estimated cost will be and then schedule those in over a period of several years so that we know when those expenses will hit and how we need to organize and coordinate staff, contractors and users of the system,” Hagerman explained.

The list has installing new street lights for main street in the downtown area, mapping the electrical grid, and putting in electric meters for the harbor that can be read and controlled remotely.
An ongoing rebuild of the local electrical grid will mean the installation of a new switch for the Petersburg Fisheries plant and that work will have impacts for other customers. Hagerman thought some of that would be contracted out to a private company.

“It’s a pretty complicated coordination issue because it will shut down a large section of town for a short while while some swap over is happening,” he explained. “Can’t do it in the middle of fishing season. It will likely be when school’s in so that may cause some problems and so there are definite coordination issues that need to be worked through but we’ll get there.”

Among the future projects is a rewind of the borough’s Crystal Lake hydro plant about 18 miles south of town. That’s replacing copper in the generator. It could also involve some other site work at Crystal Lake.

Other site work is needed at the electric department’s downtown buildings and control room while a transformer also will need to be replaced eventually. The department also wants to put some electrical lines in some parts of town underground, possibly upgrade electrical meters for all customers, replace power poles as needed and have more covered space for materials in Scow Bay.

Hagerman estimated all the work on the list would total $8.5 million dollars and he thought electrical department reserves could fund the projects if they were spread out over time.

“Course we’re not going to do it all at one time, you know so, part of the capital improvement plan is scheduling these projects in and deciding which ones are highest priority and making those happen as soon as possible,” he said. “A lot of them, because of the systems that they influence, there’s a high amount of coordination that needs to be done and so that will probably come into play in scheduling these projects out too.”

Meanwhile some work is already budgeted for and underway. The borough has purchased a new emergency backup diesel generator for the municipal building and police station and that could be installed later this summer. Also tree clearing around the penstock at the Crystal Lake hydro plant is finishing up this summer.

And the assembly approved the latest work, a bid award for Rainforest Contracting for over 78,000 dollars. That money will pay to repair a leaky roof and replace insulation in an electrical department building that houses a backup diesel generator. Hagerman explained that this was one of the electrical department buildings downtown with leaks. “This is a generator building that also has leaks coming through the roof,” he said. “The mechanic Bob Ziemke has placed buckets in various locations, it’s been patched for years and really needs to be replaced.”

The roofing and siding on that building will be replaced in that contract. The assembly voted 6-0 to award the bid to Rainforest Contracting of Petersburg. That company also has the contract to remodel the Power and Light office nearby. The remodel is expected to take about six months and should be done by next April.

In related news, the annual shutdown of Tyee hydroelectricity for power line work was delayed because of the employee strike in Wrangell this summer. It now has been scheduled at the end of summer. Petersburg will be on backup diesel power September 5-15th during that maintenance.