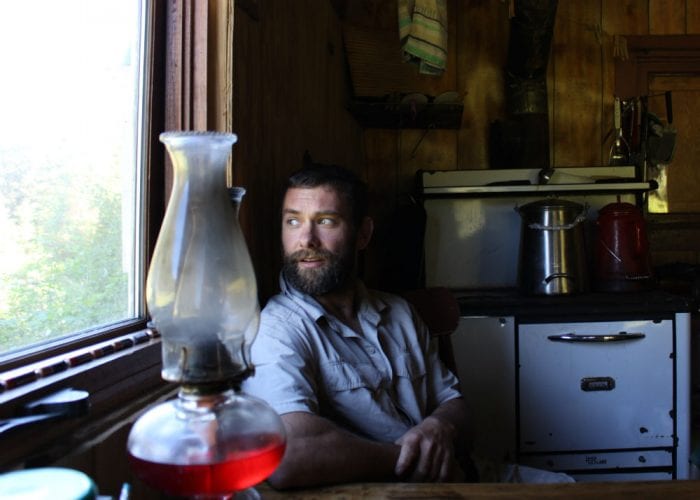 90 privately-owned cabins were grandfathered into the Tongass National Forest in Southeast Alaska when ANILCA was enacted in 1980. But once the cabins are passed down one generation, they are slated to be removed or destroyed.

One family in Petersburg is leading the charge to save their historic cabin, and others like it. KFSK’s Nora Saks has more.

Jacob Hammer tromps down an overgrown trail running next to Petersburg Creek, which flows through Kupreanof Island, a few miles north of Petersburg. He stops where the stream forks, and then narrows.

“We’re here, or almost here. That one’s the Hammer family cabin. This is where the hip waders come in,” Hammer said.

Hammer scrambles up the bank and onto the porch of a tiny red cabin nestled against the trees.

“There’s a very good chance we’re within 100 yards of a bear right now,” said Hammer. “This is their creek.”

This cabin has been in the Hammer family since the late 1950s, when Jacob’s grandfather got a permit from the Forest Service, floated it up the creek, and planted it on this plot of land inside the Tongass National Forest.

Hammer just turned 39. He’s been coming here his entire life to fish, explore and relax – first with his parents, now with his own kids.

He also served in the Marine Corps. For decades, the cabin has been a refuge for him, his father and brother, who are also veterans, and other loved ones healing from the scars of war. 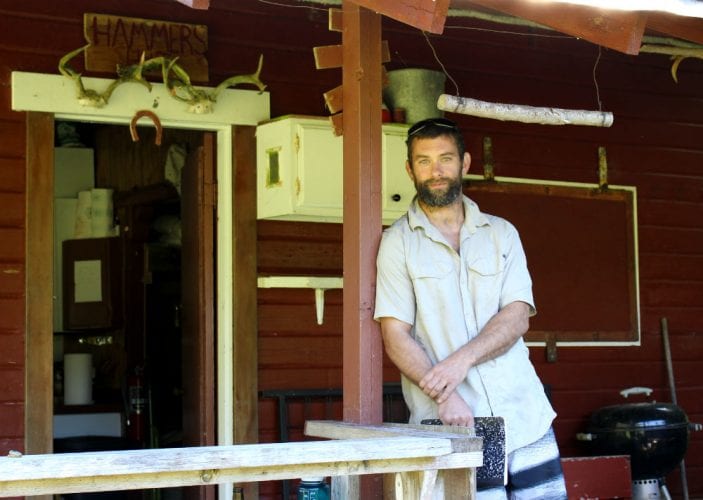 Jacob Hammer stands on the porch of his family’s cabin. He’s 39 and has been coming here his whole life.  (Photo – Nora Saks)

“This was our therapy,” Hammer said. “It doesn’t fix anything. But it’s definitely a place where you come back and you feel like your soul’s batteries have been recharged. Especially after things like that. When you just need that time, there’s no other place that lets you shut down so effectively.”

It really feels like you’re in the wilderness here, and, you are. This area was designated as the Petersburg Creek-Duncan Salt Chuck Wilderness in 1980 when the Alaska National Interest Lands Conservation Act was passed.

Under ANILCA, permits for pre-existing private cabins are allowed to be transferred once by the original owner. After that, the cabin can’t stay.

When that time eventually came for Hammer’s grandfather, he had to make a tough choice. At that point, both of his grandsons were deployed overseas. The family worried they might not come back. So the permit went to their father, Kenneth Hammer, instead.

Last September, Kenneth passed away suddenly at the age of 66. In May, the U.S. Forest Service informed the family that the cabin had to be either removed, or destroyed.

“This was the hardest sting. It’s like taking away – when everything else is bad in the world – then this is your one good thing that you come to. A couple of days up here – just imagining losing that was hard to take,” Hammer said.

Petersburg District Ranger Dave Zimmerman is sympathetic to the particulars of the Hammer family’s situation.

“It’s always difficult when that type of thing happens. At least for me and my staff. It’s awkward and sad,” Zimmerman said.

But he also says that as an employee of the Forest Service, a federal agency, there’s not much wiggle room.

“The real basic answer is – it’s kind of raw – but I’m hired to follow the law as it’s set out – so the law says they have to follow this procedure, and that’s what I have to do,” said Zimmerman.

But not everyone here has been willing to accept that position. When fellow Petersburg resident Mike Schwartz heard the Hammer cabin was in jeopardy, he felt like it was his own dogs in the fight.

“I’ve had a cabin taken away from me and I didn’t deserve it nearly as much as they do,” said Schwartz. “If I didn’t do everything in my power to help them keep the rights to that cabin, I would never forgive myself.”

Schwartz convinced the Hammers to jump into action. He helped them circulate a petition in Petersburg and online. Over the summer, they gathered more than 1,400 signatures in support of saving the cabin, mostly from locals.

Jacob Hammer says that initially, speaking up made him uncomfortable.

“I struggled with at first. Why would we get a special cabin? Why just us?” Hammer said.

But with the support of the community behind him, he sees it in a different light now. It’s not about protecting private property, or politics. It’s about trying to preserve a way of life that’s unique to Southeast Alaska, and passing on a connection with the land to future generations. 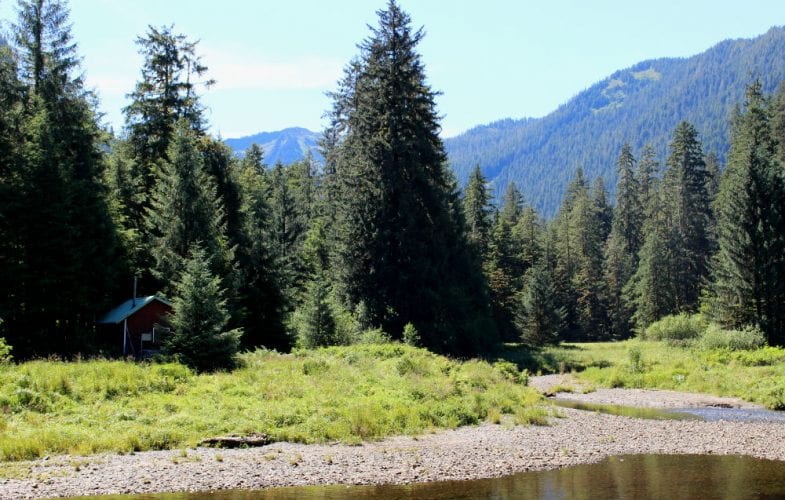 According to the Forest Service, there are 83 privately-owned cabins remaining in the Tongass National Forest which fall under the same one-time permit transfer rule. Seven more have already been removed.

“So this began as a fight and a battle for the two boys to get their permit extended, at least another generation, and what it’s turned into is a battle for all the cabins,” Schwartz said.

While the Hammers and their allies might be the squeakiest wheel, it’s an issue that touches a larger number of Alaskans.

That’s one of the reasons they’ve been able to get attention from some members of the Alaska congressional delegation.

Matt Shuckerow is a spokesman for U.S. Representative Don Young, who’s been supportive of the Hammer family’s campaign.

“For Congressman Young, this is a classic example of an agency having the ability to help someone, an Alaskan or a constituent, but choosing not to,” said Shuckerow.

Young and state Senator Bert Stedman have both written letters to the Secretary of Agriculture Sonny Perdue, who oversees the Forest Service. They’re asking him to review that section of ANILCA, and use his authority to intervene and change the policy.

According to Shuckerow, Young and Perdue have had a conversation about the matter, but there’s no further decision at this time.

Meanwhile, District Ranger Dave Zimmerman says that no one’s cabin is being burned down, and he wants to work with the family to come up with a plan. Mostly, he’s waiting to see how this all plays out in Washington.

“If it’s still muddied up above me, what we’re going to do or not do, from the national level, then I’m not going to do anything here until I have solid direction to go,” Zimmerman said.

For now, the status of the Hammer family’s cabin remains in limbo, with no clear end in sight.