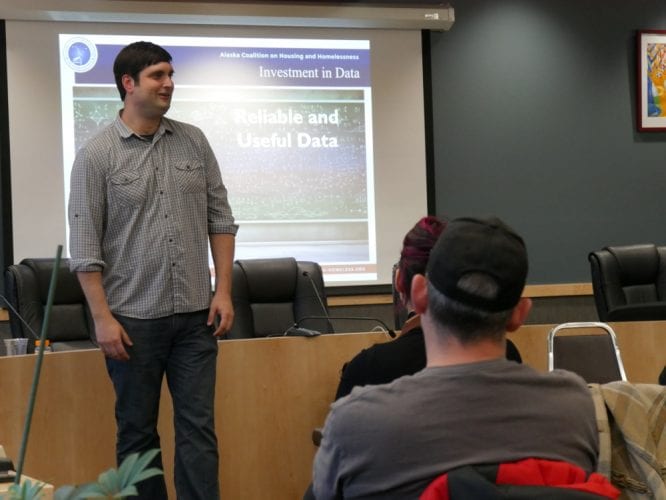 Brian Wilson, executive director of the Alaska Coalition on Housing and Homelessness addresses a meeting in Petersburg September 19, 2017. (Joe Viechnicki/KFSK)

A coalition of local service agencies and concerned citizens Tuesday, September 19 heard about strategies for counting Petersburg’s homeless population. The group is hoping to get reliable data on who is living without a roof over their heads in order to seek funding for the problem.

The informal group started meeting this summer to seek solutions for what’s thought to be a growing number of people in the area without a place to call home. This month they heard from Brian Wilson, executive director of the Alaska Coalition on Housing and Homelessness.

“I wish I was coming to this town saying here’s a huge pot of money, you know you guys have a homeless problem, you know let’s start handing it out,” Wilson said. “But that’s not the reality so. Each of these individual entities they can’t solve the problem either so. Tough economic time and flat line funding times or where funding sources are in danger. The only way to succeed in our mission to end homelessness in Alaska is to leverage our resources together and work together. So that’s our big goal here. That’s not just with these partners but it’s even with local coalitions like this. We need to be informed of what’s happening and let you know of opportunities to get your voice heard.”

The Alaska coalition’s mission is to increase affordable housing and end homelessness in the state. Wilson explained his organization covers the largest largest geographic area in the country, over 660-thousand square miles and over 147 communities. He said currently only 14 communities are counting their homeless population. Petersburg isn’t yet. So that means homeless population here being reported to federal agencies is zero. The local group that has been meeting has estimated there may more like 40 people without a permanent roof over their head in the community. Wilson encouraged the group to take part in a nationwide counting effort.

“one of the things that I think that you guys definitely need to be a part of this next year is what’s called a point in time count,” Wilson explained. “This is where we count the individuals on a single night in January. Everywhere across the country does it on the same, well single, last ten days of January. And that’s the information we’re passing up to the federal government saying this is our issue, we need resources allocated to our appropriate levels.”

That point in time count can also be done at other times of year as well.

Magistrate judge Desi Burrell asked how other places conduct their outreach. “I think in a lot of communities you find that there’s this homeless camp where people hang out,” Burrell said. “I feel in Petersburg it’s just scattered all over and it’s really hard to identify where these people are. They could be clear out at Blind Slough camping, or the ball fields… Do you advertise an outreach?”

Wilson responded that such a survey is sometimes conducted as part of an outreach day with free services and help donated by local agencies, called Project Homeless Connect in cities around the U.S.

“Usually there’s lunches there, there’s IDs,” Wilson explained. “They get a local barber to do haircuts. You know they have job applications. A bunch of services in one place to try and draw that population.”

Wilson counseled that federal agencies like the U.S. Department of Housing and Urban Development are looking for reliable information before providing funding.

“We’re at the very beginning,” he said. “This may not bring in 1, 2, 3 million dollars into your community next year or anything but its going to give you so much more advocacy power and get us going in the right direction.”

He noted other communities around the state having the same discussion about seeking solutions to a growing homeless population.
Petersburg’s homeless group hasn’t organized formally but may get to that stage. Attendees heard about training needed for surveying the homeless population and entering personal information into a national database. Volunteers had already drafted a survey for the community and may incorporate that into a more formal yearly survey effort. They plan on continuing the discussion at a meeting next month.