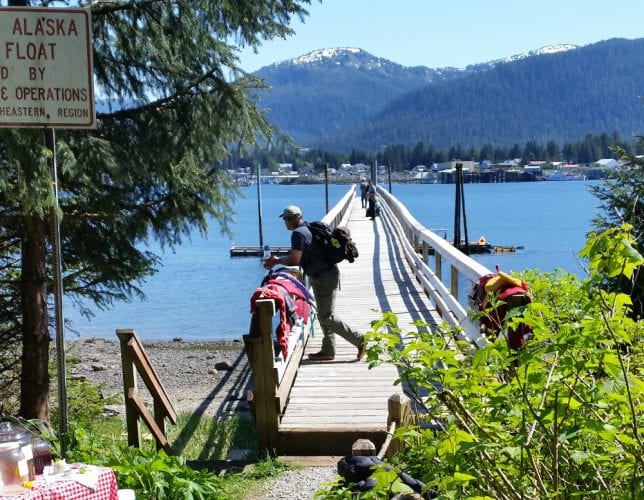 The state dock on Kupreanof was built in 1961. (Photo courtesy of Cindi Lagoudakis)

Voters in October overwhelmingly approved the first change to Petersburg’s borough charter. It could pave the way for the city of Kupreanof to take over the state dock there.

Just under 83 percent of people voting in October supported the charter change allowing Kupreanof to own and operate a harbor in the borough. Before that it was a power that was reserved only for the borough government.

The Alaska Department of Transportation owns the dock, which was built in 1961. The DOT offered it to the borough 2016, along with two other remote dock. DOT spokeswoman Aurah Landau explained it’s up to one of the municipalities to take the next step.

“Either Kupreanof or Petersburg can send some expression of interest about those three facilities,” Landau said. “DOT doesn’t want to force anything.”

A year ago the DOT rejected Petersburg’s counter offer. The borough only wanted docks at Kupreanof and at Papke’s Landing on Mitkof Island, but not a third on the mainland at Entrance Island. Petersburg also wanted more money than the state was offering to repair or replace the aging floats and walkways. Landau said there’s no offer remaining on the table but the dialogue could restart.

“You know either entity could make the offer or start the conversation with DOT,” she said. “It might make sense for Petersburg to do it because they encompass all three harbors. I mean certainly the state would like to transfer at least two of them, the Papke’s Landing and the Kupreanof dock.”

Following last year’s decision by the state, the Petersburg assembly encouraged the state to work directly with the city of Kupreanof on the transfer. That city government changed its code to allow for the transfer. And the charter change makes it clear that the city is allowed to own and operate a dock.

Borough clerk Debbie Thompson said the charter change took effect with the certification of the election. The change hasn’t yet made it into the online version of the borough charter yet but should soon.

Kupreanof mayor Tom Reinarts explained that Kupreanof plans to take the next step. “So once the charter change is approved then we will go forward to the state and request that we enter into negotiations with the city of Kupreanof to own the dock.”

Reinarts doesn’t expect a transfer to happen overnight. “If the state Department of Transportation enters into an agreement with us, it still needs to be approved by the legislature. So it’s gonna take a while,” he said.

In 2010 the state had offered a transfer to Kupreanof along with one million dollars but the legislature never did approve that deal. A consultant for the borough estimated overall replacement of the pilings, float, ramp and trestle walkway, would cost almost one point four million.

Kupreanof has secured a 40,000 dollar federal grant and is working to purchase a new float for the outside of the t-shaped dock. Reinarts said there are challenges to getting that replacement ordered.

“You know we are in the queue someplace but with all of the hurricanes and whatever through Texas and Louisiana and Florida and the rest of it, there is a tremendous demand for docking facilities,” Reinarts said. “So we’re not sure exactly where we are within the pecking order to receive it. So once we receive that then we will get it installed.”

That work will be done outside of the visitor season, when that dock sees use by cruise ship passengers and others using the trails on the island. The second class city’s 21 full time residents also use that dock to access their homes and the community building.