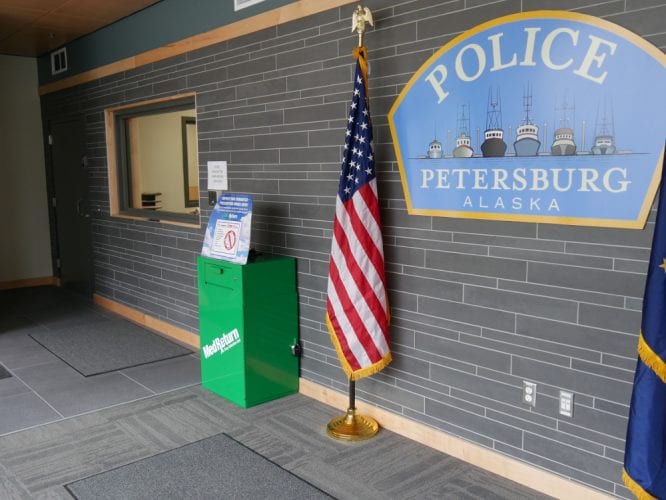 Attorneys this month in December made oral arguments in a Petersburg civil suit challenging sealed search warrants under Alaska court rules. The plaintiffs want to see the state institute some process for the target of a law enforcement investigation to regain property seized as evidence and in a “reasonable” period of time.

Two men, former Petersburg resident Danny Thompson and current resident Greg Richeson, are suing the borough, a local police officer and the regional drug task force Southeast Alaska Cities Against Drugs or SEACAD. The Alaska State Troopers are also named in the suit for their involvement with SEACAD. The two men say in separate investigations in 2013 Petersburg police officers obtained search warrants and seized property from their homes.
The borough’s attorney Timothy Bowman argued that there has been no constitutional violation. He said property belonging to Thompson has been returned. But he acknowledged that law enforcement still held some belongings from Richeson.

“Let me ask you, how long does an investigation take? There’s no statutory limitation but my god, it has been kindof a long period of time,” Carey said.

“Your honor I understand that,” Bowman responded. “I think that everybody realizes that it has been a long time and I think the issue has to do, well most of all, the investigation obviously started out as one for a marijuana grow operation.”

The hearing was held in the Petersburg courtroom with most of the participants on the phone from other locations. Bowman said the investigation of Richeson has been taken over by the Federal Bureau of Investigation and valid search warrants have allowed law enforcement to look at Richeson’s phone and electronics.

“I think we all probably can surmise that it’s gone beyond just a marijuana grow or a controlled substances investigation,” Bowman said. He thought lawsuits like this can be used to undermine a valid criminal investigation and he noted the investigation is out of the borough’s hands.

Carey came back to his questioning and said in practicing criminal law for over three decades in Alaska he’d never seen an investigation taking this long.

“Again there’s some interest in sort of keeping, maintaining some confidentiality to some of the proceedings but I think ultimately what you’re going to find is that it’s a reflection to some extent the resources that are available to a small town police force in Southeast Alaska,” Bowman responded.

The plaintiffs are not challenging law enforcement’s use of the search warrants. However the suit challenges the procedure under the state’s court rules that allow those warrants to remain sealed for four years in cases that do not result in criminal charges. Plaintiffs’ attorney Fred Triem argues that seizure of property for years is a violation of the protection against unreasonable search and seizure prohibited in the fourth amendment of the U.S. constitutions, along with a similar provision in the state constitution.

“The police and the SEACAD people take the plaintiffs stuff but they do not return it within a reasonable time,” Triem said. He argued people impacted include Thompson, Richeson and others in Petersburg. He’s hoping the case will be expanded into a class action to allow other plaintiffs. The men say the police seized coins, guns, computers, electronics, cameras, cell phones, personal papers, jewelry and other private property and did not return the items for years. Thompson’s belongings have been returned but he argues he was still injured by the loss of his property during that time. Richeson is still waiting for the return of his possessions.

Judge Carey questioned Triem on the issue of a reasonable amount of time.

“So what’s reasonable to keep a cell phone?” Carey asked.

“I think it should be measured in days, simply because the entire contents of a cell phone can be copied eo instante, instantly,” Triem said.

The judge kept up with that line of questioning.

“So you’re asking the court to set a reasonable period of a few days?” Carey wondered.

“I’m asking the court to recognize first and foremost that the current scheme of indefinite seizures is unreasonable and therefore it violates the fourth amendment,” Triem said. “Once we get past that point, there should be some mechanism for the aggrieved party, the target to complain, or to request the return of the stuff.”

Prosecutors opted not to bring charges against Thompson but still could against Richeson.

Assistant attorney general Marianna Carpeneti is representing state law enforcement. She argued that the suit asked the judge to set a reasonable time for returning property without specifying what that meant.

Carpeneti argued that the two and a half years that Thompson’s money and other property was held was not unreasonable and said the state had little involvement in the other investigation.

Judge Carey pressed Treim, the plaintiff’s attorney on the state’s involvement in this lawsuit.

“SEACAD is still aligned with, it’s in alliance with the local police who are trained by the state agency,” Triem argued.

“That alliance is enough to impute liability?” Carey asked.

Attorneys for both the plaintiffs and defendants have filed motions seeking summary judgement in the case, or a decision in their favor, which would avoid a trial. He also has to rule on whether the case can be expanded into a class action. A trial in the case is scheduled for the week of February 20th.