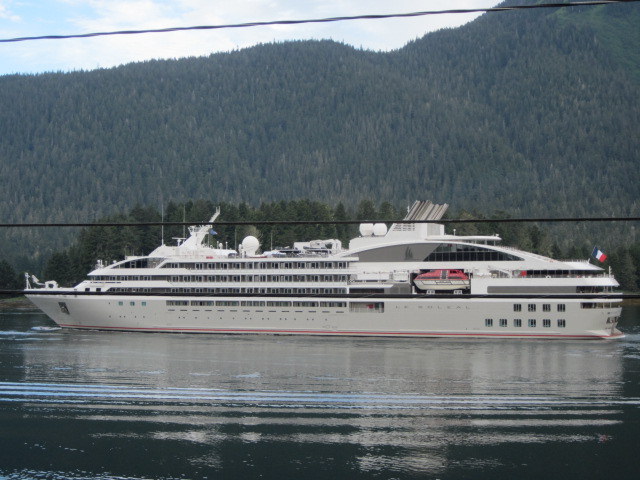 The cruise ship Le Soléal heads south in the Wrangell Narrows near Petersburg in June of 2016. (Joe Viechnicki/KFSK)

Petersburg’s borough assembly Monday heard from mostly supporters of proposals to charge two new fees in the borough. One would be an administrative fee for senior citizens who apply for an exemption from local sales tax. Another would be a fee on cruise ship passengers visiting the area. Both could be back in front of the assembly later this year.

The proposed fee for senior exemptions is at $100 in a draft ordinance circulated as a starting point in the discussion this winter. Local resident Barbara Fish thought the fee was a good idea but not that amount. “I think the cost of producing the card should be covered by a fee,” Fish said. “I think $100 is too high. I think that $50 would be closer to the cost of producing the card and I don’t know what that cost is but I don’t think it’s $100 a card. And if something also should be added maybe that it’s based on income or a lower income person you can waive the fee, if that can be written into the ordinance that’s another possibility.”

The community of over three thousand people has more than 550 seniors who have applied for a card to avoid the borough’s six percent sales tax. Borough officials say that number is growing as more people in the community reach retirement age. Finance director Jody Tow reported 60 new cards were issued in the past year alone.

Borough assembly member Jeff Meucci has been leading the discussion on the new fees. “It’s a tough process,” Meucci said during a work session MOnday, Jaunary 8. “I mean my intent is not to burden the people of the community who can’t afford it. I’m just trying to sort out the details to see if we can sort it out at the assembly level.”

Meucci wondered if the fee could be waived for low income seniors, using an application already in place for a discount on utility bills. Tow thought that could be done. She estimated the cost of issuing the cards, leaving out about 150 low income seniors, would be around $60 a card per year.
Seniors would have to apply annually and pay the cost of the card each year. Past cards have been good for three years, but the borough started issuing one-year exemption cards for 2018.

The group discussed waiving the fee for low income seniors. But they also continued to explore the possibility for a ballot question to limit the exemption itself to seniors.

“Going out and making basically a moral argument of like if you want this town to be successful in 50 years we need to find a way to limit this,” said resident Chelsea Tremblay.

“And it’s true, you’re absolutely right, that has not been on the ballot, just limiting it to low income people,” responded Tow, the finance director.

“Yeah, so that’s a very different conversation cause that’s always been the thought that people have had of knowing that there’s people on fixed incomes in town who are seniors and that’s kindof who a lot of people vote for when they go to the ballot with that question,” Tremblay said.

Meanwhile the borough’s harbor master Glorriane Wollen thought the exemption should end. “We’ve got to figure out a way to do away with it because that number is growing,” Wollen said of the people who claim the exemption. “The number that’s paying taxes is dwindling too because people are leaving town and it’s just, it’s getting completely unsustainable.”

The city council in 1980 created the senior exemption “with the intent of alleviating financial hardship and recognizing the valuable contributions which the senior citizens of Petersburg have made and continue to provide.” The borough’s charter requires any change to sales tax exemptions be approved by a public vote. Attempts to change or limit that and other exemptions have been mostly voted down, sometimes overwhelmingly. Voters have agree to end the exemption for alcohol and tobacco purchases and approved a residency requirement. A question to stop issuing those cards in 2019 went down in a landslide in 2014. The assembly can approve a fee for issuing the exemption cards by ordinance and that could be in place for the following year.

Meanwhile the group also discussed a $5-a-head fee on cruise ship passengers. A draft ordinance is based on a fee charged in Juneau. And finance director Tow reported on the capital city’s use of that money. “Whereas we’re talking about $35,000, they’re making 5-6 million dollars a year and they use it for things such as additional police, hospital support because they have a few broken hips every week from passengers on the cruise ship, things like that, downtown restroom maintenance and supplies, downtown sidewalk cleaning and garbage, harbor operations, visitor center building maintenance, transient bus service…”

That 35,000 dollars is the most Petersburg could collect from $5-a-head if all of the 116 boats scheduled to visit are filled to capacity. So it could be years before that fee built up enough money for any major projects.

“In a day and age where we’re looking for new revenue streams, $35,000 isn’t a big chunk but it’s a start.” said assembly member Meucci. He does not think an additional five dollars a passenger will discourage people from visiting here.

Viking Travel owner Dave Berg, who’s also an agent for Cruise Line Agencies of Alaska, had some ideas for use of that money. “I think that if we were spending money on you know access places, like Juneau’s doing, with you know downtown, not pay phones necessarily but rest areas, or an area out on Dock Street that would have a covered approach so that people, while they were waiting for a bus they wouldn’t be standing out in the rain. Those types of things are certainly within the realm of acceptable uses of money that is going to come from those passengers,” Berg said.

Ultimately it would be up to the assembly during the annual budget process to decide on how to spend the money.

Petersburg’s draft ordinance would only apply the fee to ships with more than 20 passengers. Berg hoped that Petersburg’s fee would be charged to ships that didn’t dock in downtown harbors but dropped their passengers off elsewhere in the borough, like the Kupreanof dock.

The harbors already charge boats for each stop, between $250 and 500 depending on where they tie up or anchor. And that amount’s expected to increase along with a 12 percent across the board increase in moorage fees in the fiscal year that starts in July.

The passenger charge, like the senior exemption fee, could come before the assembly in ordinance form sometime this year.