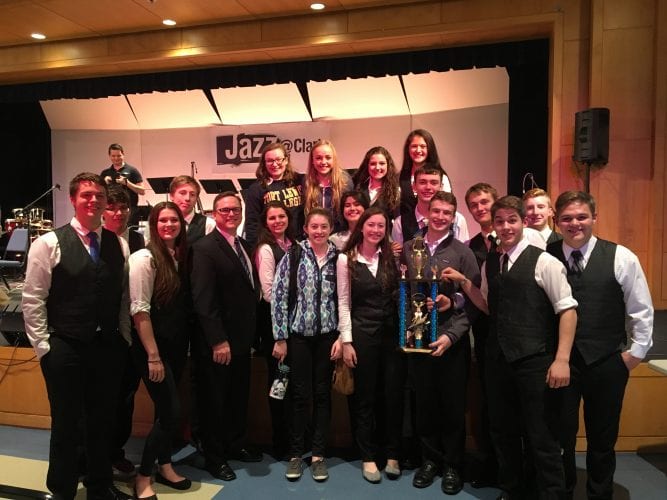 Petersburg High School’s jazz band took second place at a jazz festival in January in Vancouver, Washington. It was the first time in over a decade that the high school’s jazz band traveled out of state. KFSK’s Angela Denning reports:

About 50 students are gathered in the high school band room at 9 o’clock in the morning to play music. Some of these musicians show up an hour before school starts to play in the jazz band. All that practice paid off recently at the Clarks College Jazz Festival where there were over 60 jazz ensembles.

Petersburg was competing against some much larger schools from northern Oregon and southern Washington.

So, when Petersburg stepped onto the stage the audience didn’t know what to expect.

“They were a little puzzled,” said Matt Lenhard, Petersburg’s long-time music teacher. “Oh, a very, very small school from Alaska, what kind of jazz could they possibly play?”

What the judges and audience heard surprised them.

“From the look in their faces, and the reception was, they were surprised, they were not expecting us to sound like that,” Lenhard said. “There were a lot of smiles and the kids heard a lot from strangers, like, ‘Wow, we’re impressed, good job guys’ and genuine kudos coming from strangers, kids, adults, and that’s great when your band can get that.”

Senior Britton Erickson is the first trumpet player for Petersburg. He says he liked watching the other schools perform.

“We were in a smaller school division but even some middle schools, they were just as good if not better than us,” Erickson said. “It was really interesting to see different caliber of bands that are in the nation.”

By watching other schools play, Erickson was able to see what made Petersburg’s band stand out. He says they had a program that fit together really well.

“A lot of the other bands they tried to play a lot of really fast songs that sounded really cool but that gets boring after a while,” Erickson said. “Mr. Lenhard does a really good job of lining up a good program to incorporate different styles of music.”

Junior Gillian Wittstock is also trumpet player. She says they got helpful feedback on their performance from experts who were judging.

“I learned a lot about playing our own music actually when we had our adjudication,” Wittstock said. “The judge, she helped us out a lot with our music and that was really kind of fun and then I learned about some different styles from the other jazz bands that were there too.”

Besides watching other middle and high school jazz bands play the Petersburg students were able to see the Clarks College band perform. Senior Julia Murph says that was one of her favorite things about the festival.

“They had some super interesting styles of jazz that they played with like amazing solos,” Murph said. “And they just really loved what they were doing, you could tell that when you watched them.”

Murph plays the baritone sax. She also plays in the concert choir but says she prefers the jazz band.

“It’s really exciting, it’s a lot of fun to play,” Murph said. “And the rhythms are really catchy.”

Senior Josh Thynes is also a sax player. He plays the alto and is one of the lead soloists for the alto section.

Thynes says his favorite part of the jazz festival was being able to listen to bands from other schools.

“Being immersed into a program where I can hear so many other bands playing and just hearing all the other styles,” Thynes said.

He says he felt like Petersburg was the underdog because they had never been to the festival before like some of the other schools there.

“And going down and placing second really kind of showed that we’re a force to be reckoned with and even through we’re from Alaska we can still play just as good or better than most of the bands down there,” Thynes said. “So, that felt pretty good.”

The Clark College Jazz Festival is one of the largest jazz festivals in southwest Washington and has been going for over 55 years. First place in Petersburg’s division went to a home school network from Washington.