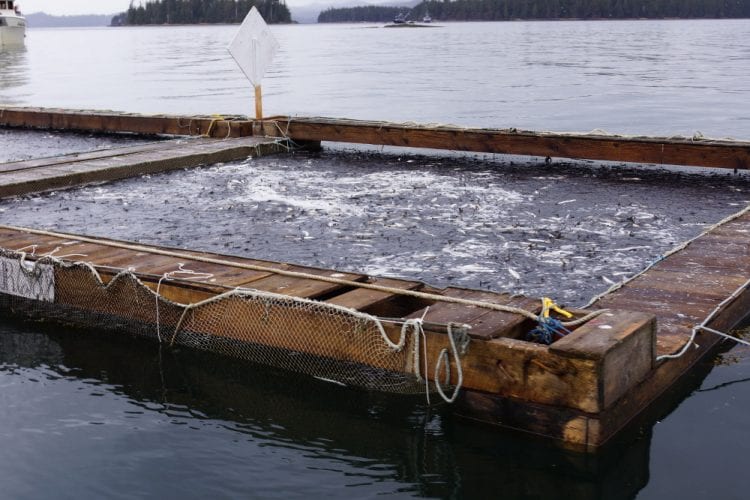 Herring fill a pound near Craig in 2014. (Photo courtesy of ADF&G).

Fishing has started in another commercial herring fishery in Southeast Alaska this month. Fishery managers expect herring could be starting to spawn this week in a spawn-on-kelp fishery near Craig and Klawock on Prince of Wales Island.

The guideline harvest level is a big increase from last year, set at 1,667 tons. That includes 742 tons not caught in a herring food and bait fishery this winter.

“After quite a downturn from last year, we’re seeing a real strong presence of fish out here this year and in addition to the quota that we have we have a little left over from the bait fishery,” Scott Walker, area management biologist in Ketchikan for the Alaska Department of Fish and Game, said on Monday, March 26. “So we’re at the top level of kelp allocation and so the fishery is being able to be prosecuted as normal this year and so far we’ve seen a pretty good body of herring in the deep areas around Craig and we’re seeing some movement into the pounding areas today and lots of whales and predator activity and so everything looks like we’re going to be having some spawn here pretty quick.”

Fishermen bring pound structures, similar to a floating net pen with kelp fronds attached. Some use closed pounds, where herring are caught and deposited to spawn and leave their eggs. After spawning the herring are released. An open pound is a floating frame placed in an area with active spawn in hopes that herring naturally deposit eggs on that kelp. In both methods, the herring eggs are harvested on the kelp and sold as a delicacy in Asia.

With a low estimate of the fish returning to spawn last year fishermen had restrictions, forced to team up with six permit holders in each pound and a limit of only 20 pound structures for the fishery. This year those restrictions are not in place. Walker said it looks like there will be about 80 pounds in the water near Craig this year. He expected permit holders would be catching herring for closed pounds in the middle of this week and said predators are signaling that fish are moving into shallower waters to spawn.

“The whales have moved into some shallow areas and the sea lions would indicate the fish are as well,” Walker said. “Things look good. And it looks like we have a really good crop of kelp. Some of the kelp beds just look really dense this year and a lot of the kelp. So potentially there’s a lot of positive factors. We never know how the fish are going to behave but it’s a good start.”

Herring typically spawn in that area in late March and early April. Last year, the fleet harvested just under 70 tons of herring eggs, fetching $6.68 a pound and worth over 900,000 dollars at the docks. Besides the sac roe fishery in Sitka Sound, the bait fishery and the spawn-on-kelp fishery near Craig and Klawock are the only other herring fisheries in Southeast this spring.