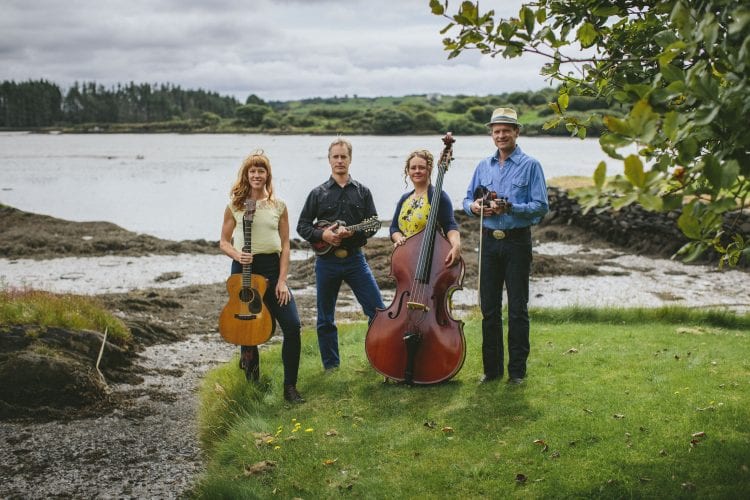 The Foghorn Stringband is performing in Petersburg April 4, 2018 at 7 p.m. at the Wright Auditorium. Tickets are $10 at the door and at Lee’s Clothing. (Photo courtesy of the band)

A traditional, old-time American roots band, The Foghorn Stringband, is performing in Petersburg Wednesday night. Although the group sounds a little country and kind of like blue grass, their musical influence has a much broader history. KFSK’s Angela Denning reports:

First of all, The Foghorn Stringband is a live band. They tour a lot, playing festivals and camps all over the world. Their sound lends itself to the live experience.

The band includes two guys and two gals playing mostly a fiddle, a guitar, a mandolin, and an upright bass. There’s also a banjo sometimes too.

Together, the Foghorn Stringband has recorded eight albums. On the surface, the band may sound like blue grass but its roots go further back.

“We play traditional old-time music,” said Sammy Lind, the fiddle and banjo player. “It’s sort of what came before blue grass music. Maybe with more roots coming from Ireland and Scotland converging with a lot of African American influence.”

I talked with Lind more about the band, their tour, and why they play what they play.

The Foghorn Stringband plays Wednesday night at the Wright Auditorium at 7 p.m. Tickets are $10 at Lee’s Clothing and at the door.

After performing in Petersburg the band will be heading on to Haines and then on to Folk Fest, which is April 9-15 in Juneau.