Petersburg school to be featured in statewide healthy living video 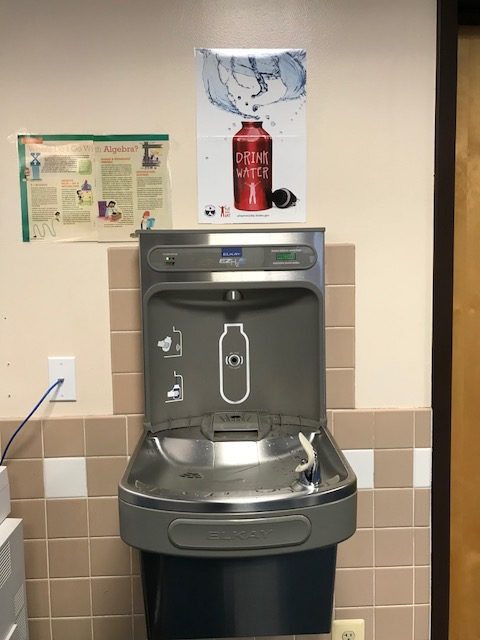 This is one of Petersburg’s water filling stations that are in the schools for students to use. (Photo courtesy of Ginger Evans)

A few school districts around the state, including Petersburg and Sitka in Southeast, will be featured in commercials about healthy living. The 30 second videos will be shown statewide in an effort to educate people about keeping youth active. KFSK’s Angela Denning reports from Petersburg.

“This has been a problem that has been getting worse over decades,” said Ann Potempa, who runs a program through the Alaska Department of Health and Social Services called Play Every Day. It’s an education campaign to prevent and reduce childhood obesity, a problem that’s affecting more children now than ever before. “And that’s concerning because over time excess weight increases people’s risk of serious diseases like Type 2 diabetes, heart disease, and more than a dozen types of cancer,” she said.

The campaign wants to change two main behaviors in children: physical activity and drinks. Many kids aren’t getting 60 minutes of physical activity a day, which is a federal recommendation. And kids are drinking too much sugar in all kinds of beverages. Drinks are the number one source of added sugar in daily diets.

But the campaign is not only talking about the problem, it’s highlighting ways that communities are helping to fix it on a local level. In a partnership with the Alaska Native Tribal Health Consortium, the Play Everyday Campaign is creating 30 second videos that get shared on TV, online and with other statewide partners like schools.

Petersburg School District will be featured in one for installing water bottle filling stations in their schools and giving children bottles to help make drinking water an easier choice.

Teri Toland is the school Principal.

“Studies show that hydration is good for our minds and so if they drink during the day, we’re all for it,” Toland said.

Toland says the school district also focuses on meeting the recommended hour-of-exercise a day. Petersburg has swimming and gym courses for all students in the grade school.

“Our swim/gym program is amazing,” Toland said. “And we’re one of the few schools left in the state that still has everyday activities like that. We ensure that they get out for recess. So, that’s a big thing.”

“Districts are struggling with it but we’ve made it a priority,” Evans said. “We know that children will perform better academically if they are being physically active.”

The water bottle filling stations were possible through a five-year state grant. The grant has also helped improve the school’s garden, pay for training staff and give teachers resources in their classrooms like books. But Evans says it’s not just the grant that has made the school district healthier.

“We’ve always been really fortunate in Petersburg that the community and the school board and the administrators support physical activity in education and health education in our district,” Evans said.

Petersburg’s grade school has also changed its practice for celebrating birthdays. Instead of sharing sugary foods in the classroom, students get recognized by the principal and receive a book.

Petesburg’s video PSA will be filmed on Monday (April 23). It will be focusing on the fourth grade class at the grade school.