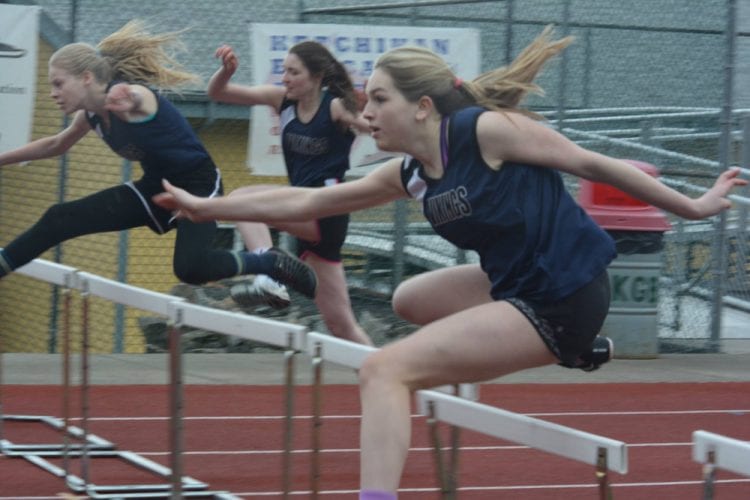 From left, Kendra Coonrad, Annie Christensen and Allie Davis compete in the hurdles at Ketchikan High. (Photo courtesy of PHS Track and Field)

Petersburg High School’s girls track team took second and the boys team was fourth at a meet Friday and Saturday, April 20-21 in Ketchikan.
Thunder Mountain took first for the girls teams while Ketchikan was first for the boys. Petersburg is competing against larger 3A and 4A schools in Southeast and took top spots in numerous events.

For the boys Isaac Taylor was first in the high jump and triple jump and second in the 110 hurdles. Koren Sperl took first in the discus and Alex Worhatch was second in the 100 dash. Julian Cumps and Noah Sullivan were second and third in the long jump and Aidan Luhr was third in the high jump. The boys 4×100 relay team was second and the 4×400 team placed third. 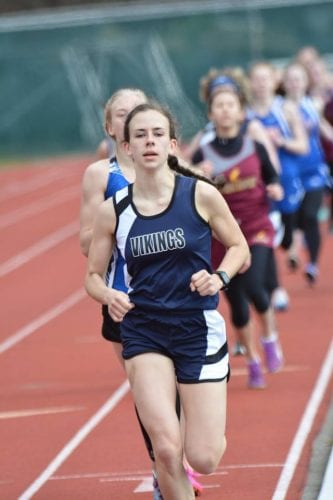 Erin Pfundt leads the 800 meter race in Ketchikan. She took second in the event. (Photo courtesy of PHS Track and Field)

For the girls, Gillian Wittstock was first in the high jump and Kendra Coonrad took third.

Kiana Kivisto took first in the long jump. Kivisto and teammate Allie Davis were first and second in the triple jump. Davis was also third in the 100 hurdles.

The teams are off this weekend and next head to Juneau in early May.