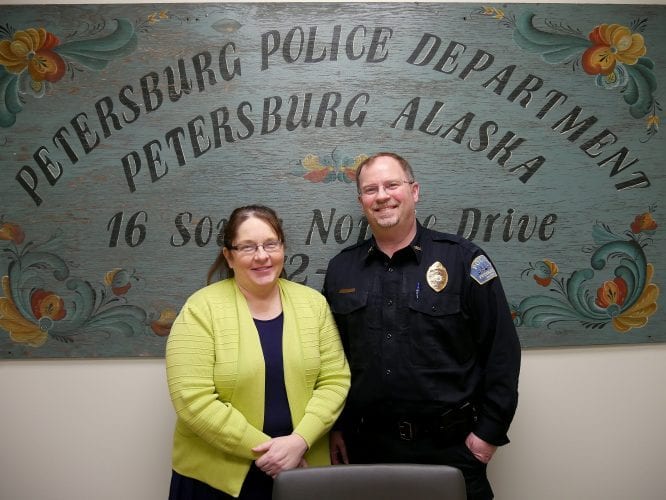 Mindy and Kelly Swihart are retiring from their borough jobs at the end of June. Kelly is the Police Chief and Mindy is the deputy borough clerk. (Angela Denning/KFSK)

The Petersburg borough has filled one top job due to be vacant this summer and is screening applicants for another. The municipality is seeking a new police chief and has filled the deputy clerk’s job.

Both positions were slated to be open at the end of June with the retirement of Mindy and Kelly Swihart. She’s the borough’s deputy clerk and he’s the police chief.

Borough officials have offered the deputy clerk’s job to Danielle Aikins, administrator of the Clarks Point village council in Bristol Bay. Petersburg’s clerk Debbie Thompson said Aikins has accepted the job and plans to move to Petersburg to start work, possibly as soon as June 1st. Aikins will start with an annual salary of $56,000.

Five people applied for the job and a panel of borough officials and local residents interviewed two Alaska residents, including one from Petersburg. Two others were from Iowa and Kentucky. The interview panel was comprised of Kupreanof clerk Becky Regula, former Petersburg clerk Kathy O’Rear and current deputy clerk Swihart, along with former assembly member Bob Lynn and harbor board member Bob Martin.

Meanwhile, the borough received 20 applications for the police chief’s job by the April 20th deadline. Of those 20, the borough sent out questionnaires to half.

Two applicants withdrew from consideration because KFSK has requested names for publication and one withdrew because the advertised salary was too low. The borough advertised the job with a starting salary of 88-95,000 dollars.

The public safety advisory board will be reviewing questionnaire answers and recommending candidates for interviews. Telephone interviews will be done with semi-finalists and the borough hopes to bring up to three finalists to town for in-person interviews.