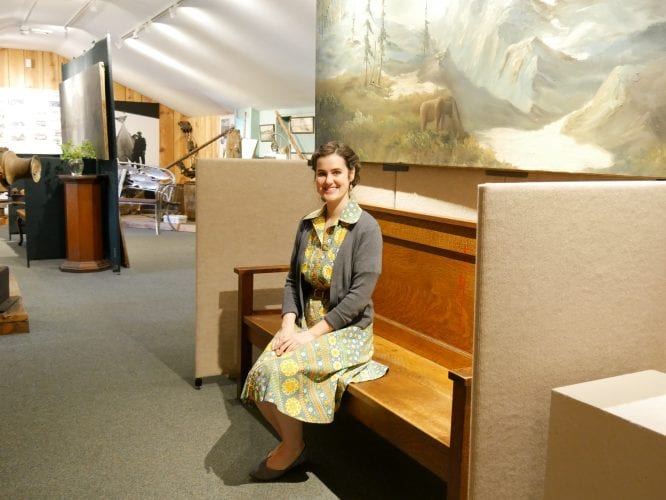 The Clausen Museum in Petersburg has new leadership. As Angela Denning reports, the facility’s new director is a local, raised in Petersburg.

Lizzy Walsh did not expect to come back to Petersburg right after graduating from college. She recently earned a degree from the University of Alaska Anchorage in sociocultural anthropology. She’s been looking at grad programs on museum curating and collecting. She was planning to take a few years off to work and earn money before continuing on with her education. And then her mom told her about this job.

“When I saw this job I was like, this is the perfect opportunity to get some experience in this field before I commit to a graduate program,” Walsh said.

The 27-year-old was raised in Petersburg as was her dad. Growing up she remembers visiting the museum on field trips at school. In later years, she would come to the museum for art show events. Now, she feels like she can contribute to the facility through the skills that she’s learned in school.

“A huge part of my studies include project proposals, which is a huge part of any kind of museum related job because a lot of it is grant writing,” Walsh said. “So you need to be able to do pretty extensive research and to have succinct, clear proposals. So, I feel like that’s kind of a strength that I’ll bring to this job.”

“So objects that seem kind of mundane and every day. You know, old fishing gear. . . it gets at the human story,” Walsh said. “These were used by real people and we can find living relatives and have these kind of very human connections to the past, which is, I think, a very strong point of the collection that we have here at this museum. ”

As for the Petersburg museum, Walsh would like to work towards updating the displays so that they can exhibit more fragile objects.

“We have some really beautiful Native American objects, woven baskets and masks, that are more delicate. They’re natural wood and fiber,” Walsh said. “So, I would like to–and I’m looking into–find a new way to display them, in a case that’s made specifically for displaying these objects that are more delicate and sensitive to light and heat and cold.”

The museum is a non-profit and relies on donations, memberships, and grants. Walsh would like to pursue grant writing for projects that will help the museum be sustainable in the future.

She also plans to continue rotating exhibits and art shows. She says the museum doesn’t only appeal to tourists but keeps locals coming back as well.

“I think that’s a really fascinating aspect of this museum is that they are able to engage so much with the community through these kind of special events. You’ll have repeat visitors,” Walsh said, “and recognizing that it’s a center for the community to kind of engage with.”

Besides the director position, the museum employs a few part-time staff as well and runs a gift shop.

Walsh eventually wants to pursue a master’s degree and possibly her doctorates. But for right now, she’s content with focusing on taking care of Petersburg’s artifacts at the local museum.