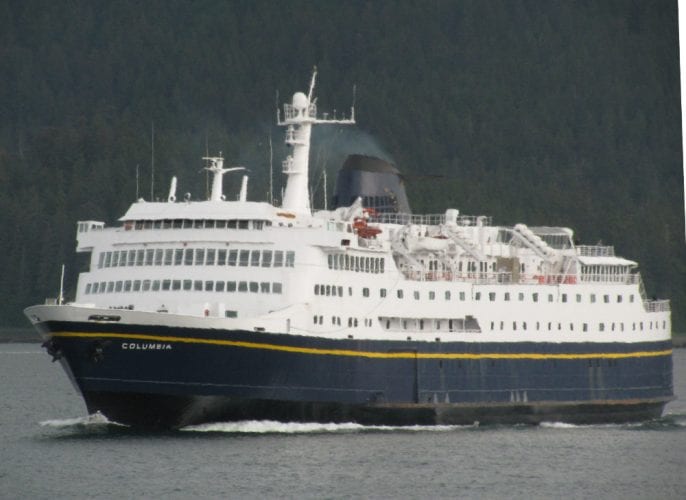 The 418-foot Columbia transits the Inside Passage in 2011. (KFSK file photo)

The Alaska state ferry Columbia was evacuated Friday morning, June 29 after crew noticed smoke onboard after the ship had docked in Bellingham, Washington. Black smoke was discovered but no flames in the bow thruster room.

“The vessel was docked at the Bellingham dock and the bow thruster is part of the mechanism (that) moves the ship left and right. So it’s used to dock,” explained ferry system spokesperson Aurah Landau. “The ship had already docked. Half of the passengers were off the boat. One of the crew members went back to the bow thruster room, opened the door, discovered the smoke and then sounded the alarm to do the evacuating and activate the fire-fighting system.”

Passengers and crew were evacuated and no injuries were reported. The passengers were all dis-embarking in Bellingham. The bow thruster room was being ventilated Friday morning. Landau said the source of the smoke is not yet known.

“Well at this point we don’t know how the schedule will be impacted,” she said. “We don’t know what happened. We still need to investigate. When the Marine Highway System knows what the source of that smoke is then we’ll be able to understand what the impacts to the vessel and sailing will be.”

The 45-year-old ship was scheduled to sail north from Bellingham with about 300 people and a full car deck at 6 p.m. Friday, June 29. That’s been delayed until 6 p.m. on Saturday, June 30th. Passengers are asked to call the Marine Highway’s Bellingham terminal Saturday morning for an update. That number is 360-676-8445. No word yet on what that delay will mean for this week’s service to Southeast Alaska.

The Columbia is 418 feet long and can carry up to 499 passengers and 133 vehicles. The ship makes weekly runs between Bellingham and Skagway, stopping in Southeast Alaska communities along the way.