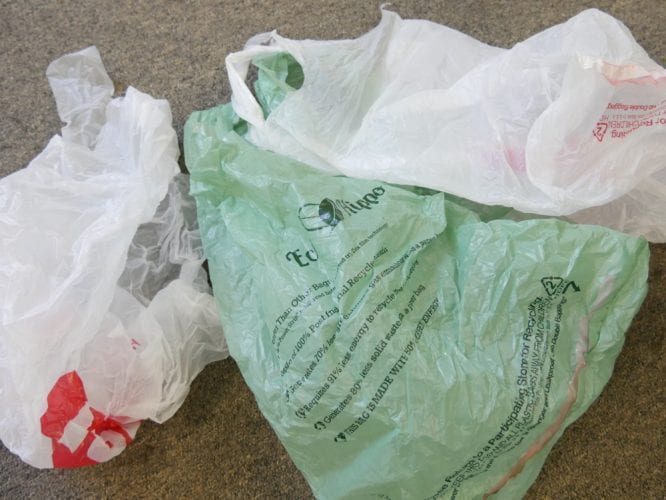 Other places in Alaska have banned single use plastic bags. Could Petersburg be next? A former member of Petersburg’s borough assembly hopes so and is asking the assembly to pass a ban here. Managers at grocery and hardware stores in town have already been taking steps to reduce their use and keep them out of the landfill.

Former borough assembly member John Havrilek says the issue has been bothering him for some time but he was spurred to action by a National Public Radio piece he heard on KFSK highlighting the problem.

“Every foot of every coastline throughout the world has at least a hundred plastic bags,” Havrilek said. “If you fill a plastic bag you can hold about 50-100. For every foot of coastline there’s that many plastic bags. That’s trillions. And it’s killing the land, the seas, the total environment for no reason. I mean we can use reusable bags.”

Havrilek would like to see bags banned in Petersburg by 2020, allowing for businesses and customers to make the change. He’s also volunteering to help out with the transition.

“I’d be really happy to work with any of the businesses, just put boxes toward the end of the store, the beginning of the store where people could put recyclable bags in there and just share them with the community,” he said.

People use the free plastic bags for garbage bags, cleaning up after pets and many other uses. Many wind up in the garbage that is shipped to a landfill in eastern Washington. Others wind up in ditches and woods around town.

Havrilek has provided assembly members with copies of ordinances passed in other communities. Those include Unalaska, Kodiak, Wasilla, Palmer, Bethel and Cordova. Anchorage’s assembly is considering such a change this summer. Other communities have opposed a prohibition.

There’s also been proposals at the state level. Representative Andy Josephson sponsored a bill this year to charge a fee for businesses giving out disposable bags but that legislation didn’t make it out of the House. It was opposed by the Alaska Municipal League, the National Federation of Independent Business and an industry group for companies that make and recycle the bags.

Among some Petersburg businesses there’s some support for some kind of a change.

“We realize that we’re a major contributor especially in our grocery store or plastic bags here on the island and we’d like to see the city and the general population look at re-usable bags, including ones they would purchase from us and ones they would bring back themselves to the store for re-use,” said John Mason, general manager of Hammer and Wikan, which operates grocery and hardware stores in town.

The grocery store offers the option for paper bags. There’s also a place at the store to drop off used plastic bags for recycling. And Mason says the store pays tens of thousands of dollars extra to use a kind of bag that’s more friendly to the environment than a typical plastic bag.

Mason said he wouldn’t oppose a bag ban, but he’d rather a phased in approach.

“First, possibly offering a discount to people who bring bags in or if they want bags have there be a charge for those bags to offset the cost and have that remitted to the city and offset some of that cost in having that plastic shipped off the island,” Mason explained.

Another local company with a grocery store and hardware store is the Trading Union. Manager Barry Morrison said the company has looked at the issue for a few years but has chosen not to charge for plastic bags.

“But this year we did bring in an assortment of different re-usable bags to see how people liked them,” Morrison said. ‘You’ve probably see ‘em downtown, the big blue bags. They’re reusable for like 100 uses, things like that.”

Morrison said the store has given out those re-usable bags and they’ve been popular with customers. He’d also like to see an alternative, like charging for plastic, rather than an outright ban. Trading Union also offers a recycling station for used plastic. He said the company will do whatever the community decides is the right thing but notes it would be an adjustment for customers.

“I can see why people wanna get rid of ‘em because there’s not a lot of great options out there,” Morrison said. “You know some of it just comes down to consumer awareness that you know you’ve gotta plan your trip if you’re going to come in you need to bring more bags.”

Bans enacted elsewhere don’t exempt small or large stores, but apply community wide. But they do have exemptions for things like fruit and vegetable bulk sale plastic bags and other common uses.

Petersburg’s Chamber of Commerce hasn’t taken a position on the bag ban yet. The chamber’s retail committee could discuss the topic when they resume meeting in the fall.

The plastic bag ban is on the agenda for the Monday, August 6 meeting of the borough assembly only as a discussion item. The assembly would need to approve such a ban in three readings of an ordinance at some later date.