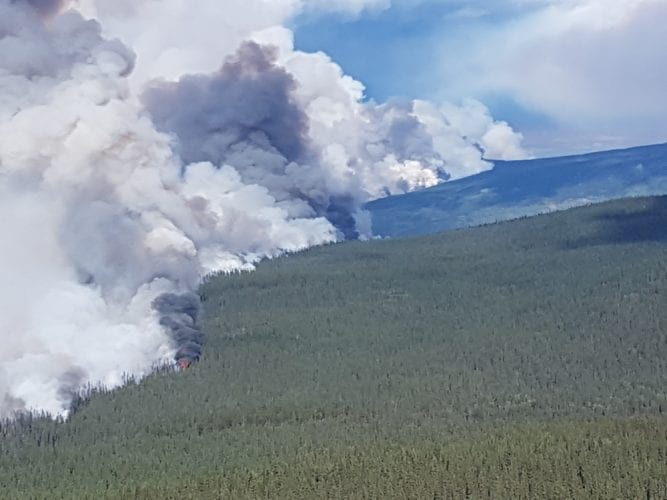 Wildfires near Telegraph Creek in northwestern British Columbia burn out of control Wednesday, August 8, 2018. (Photo courtesy of the BC Wildfire Service)

Two large fires near the small community of Telegraph Creek on the Stikine River in British Columbia have joined into one and are burning out of control.

Telegraph Creek is 160 miles up the Stikine River from the Southeast Alaska town of Wrangell. Residents in Telegraph Creek were evacuated Sunday to Dease Lake, Iskut and Terrace. The fires, started by lightning, were first discovered August 1st.

“Yes so the fire is still growing and it is still considered out of control,” Jody Lucius, fire information officer with the BC Wildfire Service, said Thursday. “Crews are working of course to improve the containment on that fire if at all possible but it is continuing to show aggressive fire behavior and with winds in the area is still growing and challenging those suppression efforts.”

A cold front was expected to pass through Thursday which could increase wind and shift direction so crews are preparing for a change in the weather.

At least 27 buildings have burned or been damaged by the wildfires. No injuries or deaths have been reported. Power was out in Telegraph Creek but crews are working to restore electricity.

Lucius said the Wildfire Service is bringing in more fire fighters from outside the province.

“So that fire is definitely a priority for the BC Wildfire Service at this time and those numbers will likely continue to increase,” she said. “We do have 133 personnel along with 18 pieces of heavy equipment and 11 helicopters on the fire today and additional resources are en route.”

The focus for firefighters is to protect other buildings and culturally significant sites in Telegraph Creek. The regional government for the area declared a state of emergency August 4th.

Telegraph Creek is on traditional territory of the Tahltan First Nation. Chad Norman Day, president of the Tahltan Central Government said in a press release Monday that about 300 people were evacuated to nearby communities. He said they were praying not to have to evacuate Dease Lake and Iskut as well but were preparing for that possibility.

Eric Yancey of the charter jetboat company Breakaway Adventures in Wrangell made the trip to Telegraph Creek on the Stikine River Tuesday.

“Actually (the) old town of Telegraph seemed to be pretty fine,” Yancy said. “There was lot of smoldering brush around it and some evidence of where they had dumped some fire retardant on the bank and whatnot but the old town itself seemed to be in pretty good shape.”

The old town has some historic gold rush era buildings. Most of the residents live in the new town and Yancy thought that was where the buildings had burned. He did see some burnt log buildings belonging to Wrangell residents downstream from Telegraph and another that had been spared by the fire.