Harvest for Southeast’s commercial summer Dungeness crab back to normal 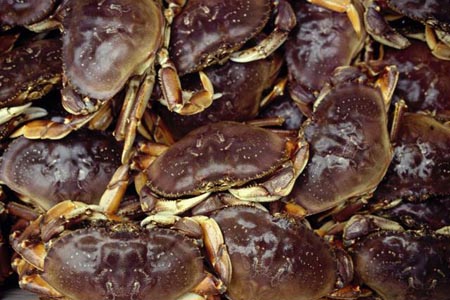 Southeast’s commercial Dungeness crab summer season seemed like it got back to normal. And as Angela Denning reports, that’s what managers had predicted.

Last year saw the worst summer harvest of Dungeness crab in decades. Managers even cut the season short. They weren’t sure what caused the crash. But this year the summer season ran the usual two months–June 15 to August 15.

Tessa Bergmann is a crab biologist with the Alaska Department of Fish and Game in Petersburg.

“The summer season has been productive,” Bergmann said. “The 2018 season is the highest summer catch since the 2015 season.”

The preliminary harvest for this summer is three million pounds. That’s in line with the recent five year average and over double the harvest of last summer, which was a very poor year.

This summer there were 169 permit holders participating.

The total value of the fishery was just over 9 million dollars. The average price was about three dollars a pound. ($3.01/pound)

The largest harvests came from Districts 8, 11, and 6.

District 11, including Seymour Canal and Stephens Passage, saw a harvest of 452,000 pounds.

District 10, near Thomas, Farragut, Gambier and Pybus Bays had the third highest participation in the fishery with 27 permits participating.

The fall Dungeness crab season will start October 1 and close the end of November for most of Southeast.

Managers are projecting a total harvest for the year of 3.7 million pounds. They consider the Dungeness fishery a “data poor fishery” because they rely solely on the commercial harvests to track the population. There are no other surveys outside of the season.