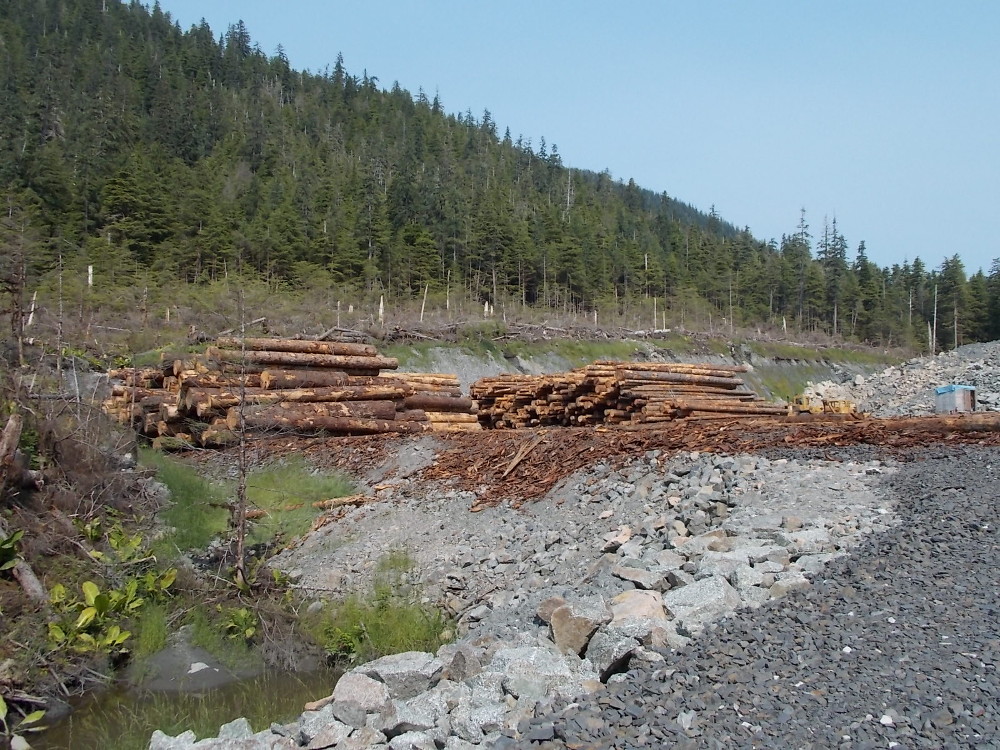 Logs await transport at a sort yard on Kupreanof Island near Petersburg in July of 2013. (Joe Viechnicki/KFSK)

Petersburg’s borough assembly Monday voted down a resolution calling for a forensic audit of two Tongass National Forest timber sales. The assembly back in May also voted against sending a letter on lost revenue from the sales and the impact to Petersburg.

The issue has been prompted by a 2016 review by staff in the U.S. Forest Service’s Washington office that noted timber companies were focusing on the more valuable trees. According to that review, that practice resulted in millions of dollars of lost value from the contracts for the Tonka sale on Kupreanof Island near Petersburg and Big Thorne on Prince of Wales Island. The sales are what are called Integrated Resource Contracts, meaning that money would have been kept on the Tongass to pay for stream restoration and culvert repair and other stewardship work.

Becky Knight has been among the local residents asking the assembly to pass such a resolution seeking answers. “I respectfully ask that you unanimously support the resolution,” Knight told the assembly. “To vote otherwise would send a clear message that not only is the timber industry a sacred cow but there are no budgetary issues facing our community and we are willing to allow millions of dollars to evaporate while suffering the economic and ecological cost with no apparent concern.”

The assembly discussed a draft resolution in April but didn’t vote on it. In May, a short-handed assembly voted down sending a letter to Forest Service officials seeking some of the same answers.

The timber sale problems were highlighted by the group Public Employees for Environmental Responsibility, or PEER, a nationwide watchdog group based in Silver Spring, Maryland. PEER published the 2016 Forest Service review of the sales and sued the agency for documents relating to Tongass timber sale administration and appraisal. PEER says it’s received thousands of pages of Forest Service documents and communications but says it hasn’t seen evidence of change in sale oversight. The Forest Service has said it is implementing a plan to address the Washington office review findings.

Assembly member and retired Forest Service employee Bob Lynn was against the resolution and said he understood the agency was already following up on the problems.

“We need to look at going forward,” Lynn said. “Yeah there’s corrective items here and yeah it needs to be fixed and I don’t disagree with that. But to go back and to ask for another audit that’s already ongoing and one that’s supposed to come to conclusion I don’t think is correct, because all that does is just jam things up really. From a borough standpoint I think we need to look at it from a positive way. And the positive way would be to write a letter asking first of all if we wanted to, maybe the chief of the Forest Service or the Secretary of Agriculture to give us an update on what is going on and when we can expect some results.”

It’s was Lynn’s first meeting back on the assembly. He was off for a year and not a part of the vote in May against sending such a letter.

Assembly member Jeff Meucci asked for the resolution to be back on the agenda at this time.

“This resolution has been before us for quite a while, for like probably a year,” Meucci said. “We had an assembly member here who worked for the Forest Service and this resolution was going to cause him some uncomfort at work. And I didn’t want that to happen. I respected him too much to kind of jam it down his throat and make him vote on it. Now we have an opportunity to kind of move this thing forward. If somebody would like to submit a letter to the Forest Service we can certainly do that but this has been out there for a while. It can’t hurt to ask.”

Current Forest Service employee Eric Castro didn’t run for re-election this year and is no longer on the assembly. Still the votes weren’t there to pass the resolution, only Meucci and Jeigh Stanton Gregor supported it and it failed 2-4.