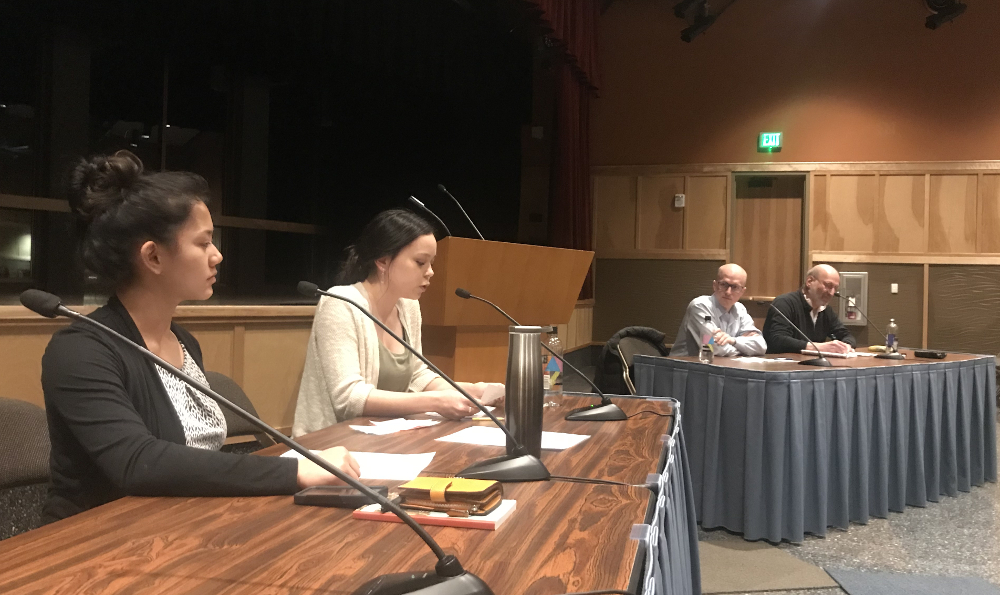 Candidates vying to represent Petersburg, Sitka and other island communities in central Southeast Alaska took part in two forums last week and their political differences were clear. Republican challenger Richard Wein is campaigning on improving the economy and resource development. Democratic incumbent Jonathan Kreiss-Tomkins is touting his past record and making his case to be a balance against a possible Republican governor.

The second of two forums in Sitka was hosted by American government students from Sitka High School at Harrigan Centennial Hall. Students asked the candidates their own questions and questions from the audience.

One question sought the candidates’ positions on repealing the roadless rule on the Tongass National Forest. Richard Wein, a retired surgeon and member of the Sitka assembly, supported an Alaska specific exemption from the nationwide rule that limits new roads and logging on undeveloped forest land nationwide. He thought it was important to provide more timber to Viking Lumber in Klawock.

“At Viking they employ a stream of people of about 235 and that is a significant number of people from Craig and Klawock and other areas,” Wein said. “To deny a constant stream of selective logging, etc. I think is not appropriate. Alaska needs all the tools that it has on the table to make appropriate decisions on how to deal with the resources that we have.”

Meanwhile, representative Jonathan Kreiss-Tomkins, seeking his fourth term in the house highlighted the work of a 15-person Tongass Advisory Committee. That group of Southeast residents and business leaders recommended changes to forest management in 2015, which became the basis for the agency’s forest plan amendment the following year.

“I’m very partial to that sort of consensus-based approach,” Kreiss-Tomkins said. “I mean I’m sort of watching and seeing what unfolds in terms of a possible Alaska exemption. Governor Walker’s appointed a working group. Sitka has representation on that working group. The details matter. But in general when it comes to management of the Tongass that kind of consensus based process in my mind is the way to go in order to try to put the Tongass timber wars behind us and sort of have a consensus-oriented management approach.”

The candidates also answered questions on topics ranging from crime, the death penalty, preparing for school shootings, access to abortion, health care affordability, a state income tax and the Alaska Permanent Fund. The two candidates had different answers on the fish habitat permitting question on the ballot this fall. Wein said he was voting no on the ballot measure.

Kreiss-Tomkins hasn’t revealed how he’s voting on that question but he did signal some concerns he had with project permitting.

“There’s a real conundrum where you have major projects proposed in the Bristol Bay watershed for instance with the Pebble Project and it is reasonable to conclude looking at the current habitat and permitting laws that that project really wouldn’t be denied, that there’s no recourse for local communities and project opponents given the way permitting and habitat laws are written, which I find concerning when you have a project that is broadly opposed by Alaskans,” he said. “You can look at past ballot initiatives on the matter as well as by the people of that region. So that’s a problem and it needs a solution of some sort.”

That issue came up again later in the night when the candidates had a chance to ask each other questions.

“Are you supporting Mike Dunleavy for governor?” Kreiss-Tomkins asked.

“The answer is yes,” Wein responded.

‘My question to you is, are you going to vote yes or no on proposition one?” Wein asked.

“I’m going to defer to what the voters say on the issue,” Kreiss Tomkins answered.

Kreiss Tomkins was born and raised in Sitka. He left college early and was elected to the legislature at the age of 23. In closing statements he summed up his priorities for the next two years if he’s re-elected.

“I believe in supporting a constitutional amendment that fully protects the Permanent Fund, that consitutionalizes the dividend at a sustainable level. And I support the bi-partisan coalition which is one of the best things going for this community and this region, especially in the face of a Dunleavy administration which has proposed a 12.5 percent tax on commercial fishing and could really be an anathema to coastal Alaska,” Kreiss-Tomkins said.

Wien is originally from New Jersey and has been in Alaska for about 18 years, working at both hospitals in Sitka. He made his case and summed up some of the main tenets of his campaign.

“I stand for smart resource development whether it be mining, timber, etc,” Wein said. “I stand for voting on proposition one. I stand for the exemption rule. And I have reasons for all of these. And the most important thing I stand for is to develop a vibrant economy in the state of Alaska.”