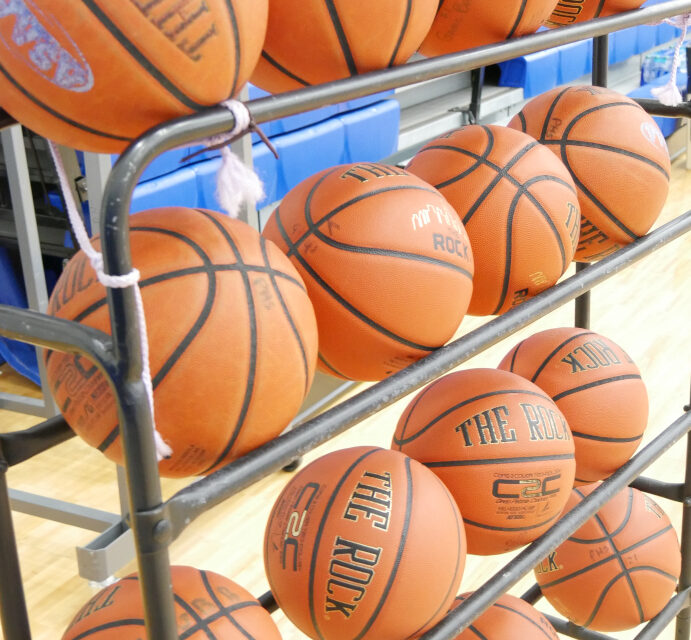 “On Friday, we came up a little bit short: 38 to 46,” says Coach Rick. “And then on Saturday’s game, we were behind — I believe 10 points in the fourth quarter — and made a huge run the last three minutes of the game and tied it and sent the game into overtime. And the crowd had moved in for the varsity games, so it was a full house. The pep band was playing and it was a great atmosphere for the young guys. We came up one basket short, though. We ended up losing 27 to 29, but two very hard-fought games by our JV team.”

“We’ve had an interesting season,” says Coach Rick. “We haven’t had the same lineup or group of kids from one weekend to the next. We came in this weekend with a couple of kids out for different reasons.

On Friday, the varsity game took us a little bit of time. We were a little flat in the first half, down four at halftime. We came out in the third quarter and we were still struggling to get into a rhythm, but at some point we started making a comeback towards the end of the third quarter. And we outscored Wrangell 23 to seven in the fourth quarter split and played really well. Our inside game is pretty strong, so we ended up winning 53 to 40.

So then Saturday, the game really was fast-paced. I’m sure from the standpoint of the fans, it was entertaining. Both teams played really well. We fell behind early — I believe we were down seven-to-nothing or nine-to-nothing, but I thought we were getting okay looks. So we started putting the ball in the basket. We were down three at the end of the first quarter, had a five point lead at halftime, down one at the end of the third quarter. So, it just kept going back and forth. And then, at the end, we made a couple of critical defensive stops — made some free throws in a basket and ended up winning 56 to 51.

So one of the strengths of our team is just the balance that we have and different people that can contribute. And that really showed, with some guys out for injuries and sicknesses. Anytime you can win two games in our league — let alone, against Wrangell — that’s a good weekend.”

“I saw a lot of good things this weekend,” says Coach Dino. “Friday, we did a nice job of running our offense and getting good looks. And then that’s the second half, we struggled a little bit, and then we started playing harder. And then I thought we did better as the game went on. Saturday, I thought that was the hardest that we played all year long. We full-court pressed and went after him and just tried to do some different things and learn some different things. Which is really important for us at this point. We struggled to score in the first half. But we were still in the game, and came out and scored 10 points in the third quarter, which is our highest scoring quarter of the year. From that viewpoint, it’s exactly what you want out of the weekend.”

The Lady Vikings’ junior varsity  game was canceled. Coach Dino says Wrangell did not have enough eligible players to compete.

The headline of this story has been edited to reflect the fact that each of the teams played two games on homecoming weekend, with a total of six games.