Two Southeast commercial crab fisheries that start up later this month will keep a flexible start date in future years. The state’s Board of Fish last month voted down proposals to change to a fixed February starting date for Tanner and golden king crab fishing.

The Alaska Department of Fish and Game submitted a proposal seeking to go back to a fixed starting date for both crab fisheries. Since 2005, the start of the season has been set in February, but has been flexible based on tides and weather. Board member Bill Brown of Juneau summed up discussion from committee work.
“Industry would like a fixed start date so they can organize their marketing procedure and I do understand that,” Brown said. “But the fishermen are concerned about safety and about losing pots and stuff and the fishermen wanna have not a fixed start date but a start date based on tides.” 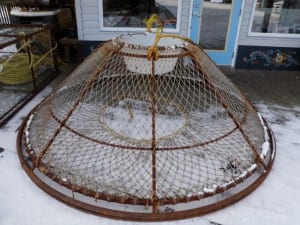 The start date in the past six years has ranged from February 10th-18th based on input from the industry and weather delays. Fish and Game’s Forrest Bowers said the fixed start date would eliminate negotiations with industry over the best start date.
“We are able to very simply implement a regulation with a fixed start date,” Bowers said. “We can also simply implement a regulation that’s based on the lowest Juneau tidal range. It’s a simple exercise to read the tide book and determine that,” he said. “But where the difficulty has occurred is when we’ve attempted to accommodate input from the industry on what that lowest Juneau tidal range really means.”

Board members did not support the fixed start date. Vince Webster of King Salmon wanted a moveable start to allow for for tides and weather. “I think the department was trying to please everyone and they got frustrated so they said you know, lets just make a fixed date,” Webster said. “And if this goes away, I think the department needs to go back and do exactly what the regulation says and they can put the blame on us. So I’m not going to be in support of this.”

The Board unanimously voted down the fixed start date of February 15th. They were also unanimously in favor of new language that spells out weather conditions that could delay the season. That was also a department-submitted proposal following several weather delays in the past four years. Proposed language allowed for a delay with forecasts of gale force winds. The Petersburg Vessel Owners Association suggested including freezing spray warnings.

Board member Webster said committee participants had disagreements over the bad weather that would trigger a closure. “The reason no one can agree on the wind speed is because we have different sizes of boats out there,” he said. “People have invested big money so they can go out in bad weather. Do we wanna make this an equal opportunity not based on investment, not based on the amount of work that goes into the fishery? I’m not a big fan of that. So I think this is a compromise. It takes safety into consideration.”

The Board unanimously approved regulation language allowing for a delay with gale force wind warnings (35 knots and higher). The Board also voted down a pot limit reduction for the two crab seasons. This year’s Tanner and golden king crab fisheries both start up February 16th.