A newly-formed company has applied for a federal permit to study a controversial hydro power project in Thomas Bay near Petersburg. That follows the denial last month for another company that held that permit since 2004.

The new company’s called Hydro Development LLC. It has applied for a federal preliminary permit to study the potential for a power plant at Swan Lake and Cascade Creek on the mainland, about 15 miles northeast of Petersburg. A preliminary permit gives a company 3 years to study a project and exclusive rights to file a license application during that time. 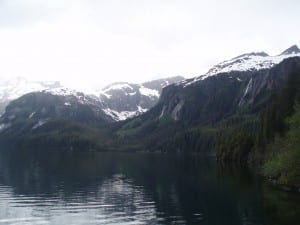 The new application was filed from the address and phone number of a Bellingham waste incineration and mining company called Olivine. Olivine has partnered with another Bellingham company called Tollhouse Energy on biomass and solid-waste-to-energy projects, according to the Tollhouse’s website. Tollhouse used to own Cascade Creek.

Fischer is president of Tollhouse Energy and founding shareholder of Cascade Creek. He resigned last July as president and CEO of the Vancouver corporation Alaska Hydro which now owns Cascade Creek. However, as of late October, Alaska Hydro documents showed he was still the largest shareholder of that company.
KFSK left a message for Fischer at his Bellingham office but did not hear back from him in time for this story.
In an email, Cascade Creek’s Chris Spens writes that his company “does not have any active agreement with any other company for any other project than Cascade Creek hydropower project.”

The city of Petersburg has opposed Cascade Creek’s development plans and this latest filing by the new company has prompted more concern. Energy consultant Nan Nalder has done contract work for Petersburg Municipal Power and Light and is convinced the new application is connected to the other Swan Lake filings. Nalder says she emailed officials with several public utilities in Southeast suggesting they comment to the Federal Energy Regulatory Commission on the Hydro Development application. “I was wondering and I had thought about what would happen now that FERC had denied a third permit,” Nalder said. “And I thought that Mr. Fischer and his colleagues had few options. One was to contest it. And the other was to find somebody else to file which they did. They found somebody else to file.”

The new application is similar to Cascade Creek’s from a year ago, with one big difference. Hydro Development proposes to draw down Swan Lake as much as 40-feet to produce electricity. That would increase the storage capacity of the project. And it would address a regional shortage of hydro projects that have enough water storage to meet wintertime demand. In Cascade’s most recent filings, that company had proposed to stay within a six-foot seasonal fluctuation of the lake.

Hydro Development proposes to sell power from Swan Lake to meet the region’s increasing demand for electricity. The application cites oil-to-electric heating conversions that have boosted demand during the colder months. It also cites the use of electric vehicles and the potential for powering docked cruise ships as factors that support the need for additional hydro-electric plants in the Panhandle.

Swan Lake hosts a National Forest recreation cabin. The area also is a popular hunting and fishing destination and is used by tour ships and charter boats. Along with local opposition, Cascade Creek has met with extensive complaints from the state and federal agencies that reviewed the company’s planning and study work. FERC cited a lack of progress as well as concerns voiced by the resource agencies and local residents in denying Cascade Creek a third permit.

Alaska Hydro co-chair Cliff Grandison says that decision was a complete shock to him. He also says there’s no connection between the new application and his company. Grandison says Alaska Hydro’s only option is a request for a rehearing of the federal decision. The corporation has hired a Virginia law firm to help make that happen.