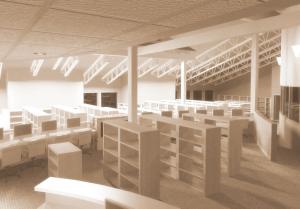 Petersburg’s new library project is ready for construction. The city started advertising for contractor bids Thursday of last week. With the final plans complete, the architect’s cost estimate remains unchanged at just over four and a half million dollars. The building will be paid for with a legislative grant, private donations, and a local bond that voters approved last fall. City officials expect to award the construction contract in mid-April.