The prices for water, sewer and garbage services in Petersburg could see small increases this year and each year until 2018. Petersburg’s city council Monday gave their first approval to rate increases for the utilities. They also approved salary increases for 13 managers of the various city departments.

City council member Don Koenigs opposed the length of time for the increases. “I would feel far more comfortable if you were looking at a three year period with modest increase and looking forward,” Koenigs said. “You’re looking out into the future a long way.”

The increases are meant to help cover rising costs of doing business for the three utilities as well as maintenance work and improvements. 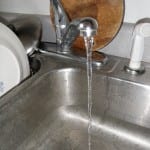 Assistant public works director Chris Cotta explained how staff came up with the timeframe for the rate hikes. “You know the capital plan we put together based on discussions with staff kind of dictated that we project some rate increases out across that seven-year period in order to implement the projects we were talking about,” Cotta said. “I suppose we could condense our proposed expenses into a shorter time frame but that would entail higher increases to meet our goals. So we felt like it was a nice compromise.”

Water rates last went up in 2008. That was a 40 percent increase. The council boosted waste-water rates 1-2 percent per year from 2007-2011 and garbage charges went up five percent a year from 2007-2010. The latest proposed rate hikes are the result of a consulting firm’s review in May of the charges and costs for the three utilities.

Councilor Rick Braun thought the increases could be reviewed in future years. “If something changes or, 2-3 years down the line and this is just not working I think we could look at it again,” Braun said. “This gets us started and if it looks like its gonna work we could leave it in place, but if not we can come back and change it.”

Councilors approved the rate increases in first reading by a 4-1 vote with Koenigs voting against them. They’ll need another two council approvals before they take effect and could be implemented as soon as next month.

The new salaries range from $58,000 dollars to $95,000 dollars depending on the job and longevity of the employee. Councilor Koenigs was concerned about giving raises and a potential impact for other city employees. “Coming up is the IBEW contract and the plan as proposed will surely be used during this process,” he said. “Whatever we do today within the city is going to be used to be reviewed by other unions when we come back to the table. They’re gonna look at how, what was your rationale process, that’s my thoughts. Makes me wonder if it isn’t part of the call for rate increases for the utilities.”

The department heads are not represented by a union. Koenigs made a motion to approve only the percentage increases and not the additional adjustments but no one else on the council was interested in that approach.

Councilor Braun agreed with Giesbrecht’s adjustments to the salaries. “I understand where he made his assessment on which of the department heads should receive a larger adjustment because of their level of responsibilities and also their past performance,” Braun said. “I think it was more than warranted.” The council approved the salary increase by a 4-1 vote with Koenigs voting against it.

The council also approved an ordinance in second and third reading to withdraw from the Inter-Island Ferry Authority. That issue will appear on the municipal ballot in October.