The agency that owns two hydro-electric power plants in Southeast Alaska is funding 12 million dollars worth of repairs and upgrades to the electrical grid connecting Petersburg, Wrangell and Ketchikan. The board of the Southeast Alaska Power Agency last month voted to fund work on the transmission lines and communication systems for hydro electric plants at Swan Lake near Ketchikan and Tyee Lake near Wrangell.

For iFriendly audio, click here:
SEAPA owns the main hydro power sources for the three communities and puts money aside from the sale of electricity for renewal and replacement projects. “It’s ongoing, as components wear out, you need to replace them,” says Dave Carlson, who serving as acting CEO for SEAPA until his replacement is hired. “This year it was kindof the culmination of a perfect storm where we’ve been doing a couple years of studies and analysis on a couple different projects and they’re all becoming ripe at the same time,” Carlson says.

That means 12 million dollars worth of replacement equipment and new infrastructure for the power plants and the transmission lines that move electricity to the three communities. Three point six million dollars of that will pay for a replacement piece of equipment called a reactor that’s used on the submarine transmission cable between Wrangell and Petersburg. “If that were to fail Petersburg would not be able to receive any hydro power,” Carlson says, adding, “So it is a critical component and I applaud the board for moving forward with that.” 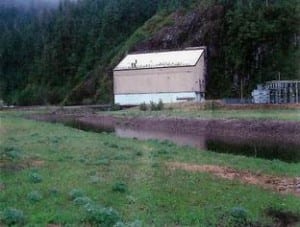 Another two million dollars will pay for an improved communication link to the Swan Lake hydro project near Ketchikan. Carlson says SEAPA lost its primary link to that power plant during the decommissioning of the Loran-C system in 2010. “That went away and we cobbled kindof a satellite system that works but not real well, not a long term fix. And over the past couple years we’ve done a pretty extensive study of what our options were and what it boiled down to is our preferred option is to, its called skywrap and you literally wrap fiber optic wire or cable around a conductor on our transmission line that goes out to Swan Lake,” he says.

The communication link helps the organization monitor the power project and diagnose problems.
Another three million dollars will be used to build and replace helicopter landing pads along the agency’s transmission lines. Carlson says the money will pay for 70 landing pads on the 57-mile Swan Tyee Intertie and another 40 pads along the rest of SEAPA’s transmission lines.

“That’s if you have to access the line and also for line clearing. It’s mainly for helicopters to land because the topography is really steep and its very difficult to get helicopters in and land anywhere. So we’ve chosen sites where there really is no option and that’s where we need to have the helo pads located. So its again, all these projects are geared towards increased reliability of the lines and the generating projects.”

Another 900-thousand dollars will pay for a spare set of coils for generators at Swan Lake.
In other decisions, the SEAPA board voted to continue investigation of raising the dam at Swan Lake to increase hydro storage capacity. The board voted to keep the wholesale power rate for the three member utilities at 6.8 cents a kilowatt hour for the 14th straight year and voted to approve a rebate to the three utilities of 800-thousand dollars. That rebate money will be divided up based on power purchases in Ketchikan, Wrangell and Petersburg.