Local bears back to old tricks

Its that time of year again for Petersburg’s resident black bears. As the summer winds down, authorities are getting more and more calls about black bears trying to get a free meal from local garbage cans and other enticements in Petersburg. It doesn’t help that it’s been an off-year for pink salmon, a primary food source for the animals. The state has already used a culvert trap to catch at least one nuisance bear downtown and move it to the mainland.

So, the Alaska Department of Fish and Game and local police are reminding residents to take precautions. Matt Lichtenstein spoke with state wildlife biologist Rich Lowell 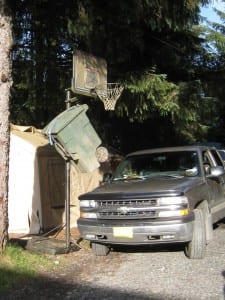 A Petersburg resident takes a creative approach to keeping bears out of their trash this summer. Note the garbage can hanging on the basketball hoop. Photo courtesy Rich Lowell, ADF&G.